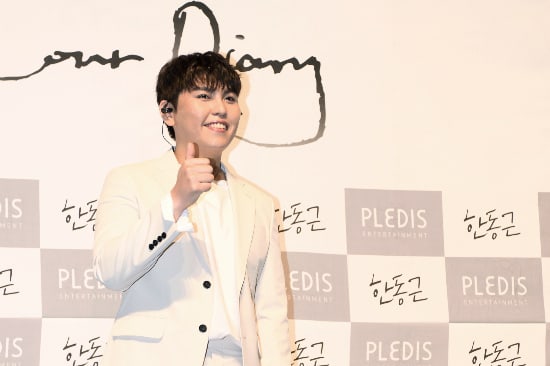 On May 4, singer Han Dong Geun held a listening session to commemorate the release of his first studio album, “Your Diary.”

Answering questions about his hopes for his album, Han Dong Geun said, “On the charts there is IU, and there is also Hyukoh, so just releasing an album at all feels like an achievement.” He continued, “I am not expecting much. I will become more familiar to people, I’d like it if they would refer to me as ‘our Dong Geun.’ Even my title ‘Icon of Reversals’ is something that I simply received rather than created for myself. I am thankful for everything.”

The title track for this album is, “I Want to Go Crazy.” It is a song about someone who longs to see someone again so much that they mistakenly believe they are actually seeing them. XEPHY, a producer from Brand New Music, wrote the lyrics for “I Want to Go Crazy” and co-produced the song. He was also part of the team who created Han Dong Geun’s surprise hit, “Making A New Ending For This Story.” (“Making A New Ending For This Story” was Han Dong Geun’s debut song released in 2014, but it achieved No. 1 on a music program for the first time in 2016).

Han Dong Geun’s first studio album “Your Diary” comes out in full on May 5.

Han Dong-geun
How does this article make you feel?