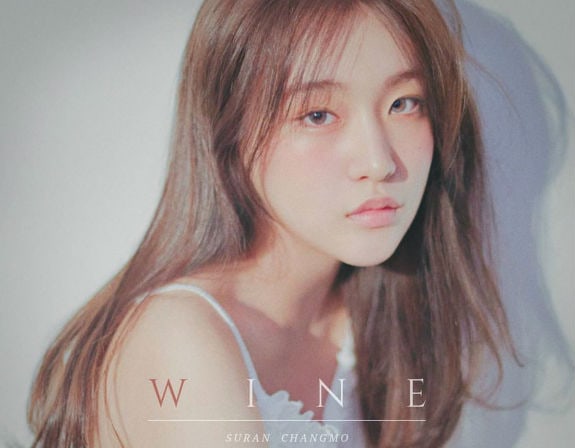 On May 5, singer Suran’s latest release, “Wine,” was No. 1 on the real time chart for Melon, the Korean music streaming service with the most users. The song has maintained its top position on the Melon chart since its release on April 27. On other music charts, IU’s “Palette” has reclaimed first place with Suran in second, but Suran has drawn attention for keeping the top spot on both Melon’s daily and real time charts.

“Wine” is a trendy hip-hop, R&B track with a pop-based groove that tells the story of someone who reminisces about their ex through their memories floating in a glass of wine. Co-produced by BTS’s Suga and featuring popular rapper Changmo, the collaborating members of the track drew a lot of attention, leading to the song reaching No. 1 through word of mouth after its release.

Attention increased when “Wine” first passed IU’s “Palette” on the charts to reach No. 1. When this occurred, Suran uploaded emotional posts on her personal Instagram.

The first post is a series of pictures (click right to see them all), shared alongside the caption, “Just…everything…thank you everyone. Suran’s first mini album coming out in May, please anticipate it. The album…actually, I finished it. So I’m going to get drunk today. Until then, please listen often…thank you.” She included in the middle of her message a hashtag expressing how this is her first time seeing her rank on the charts jump like this.

She shared a second post on the same day with the caption, “First place…first place you say…is this really true? Thank you so so much to everyone who enjoyed the music of #’Wine.’ I will diligently prepare and return with my mini album as well. This is all due to the people who helped me, to everyone else.” She added hashtags thanking her fans, Suga, Changmo, and even included a #Thxarmy hashtag as well.

It seems, however, that “Wine” did not jump fleetingly to No. 1 only due to the popularity of Suga and Changmo. Instead, the song shows signs of maintaining its position in the long run. In addition, comebacks by singers appear to be slowing down in May due to the presidential elections and the bonus long weekend (referred to as the “golden holiday”) formed by the proximity of the national holidays commemorating Buddha’s birth and Children’s Day. Suran held onto first place even during the May 2 comeback rush of Kwon Jin Ah, Lovelyz, Highlight’s Yong Jun Hyung, and the May 5 release of Han Dong Geun’s first studio album.

If this continues, maintaining No. 1 might only be a time issue for Suran until PSY’s comeback on May 10. It will be worth noting to what extent Suran can maintain her position in the top ranks after PSY releases his album. It is also possible that Suran will bounce back up the charts with the release of her mini album sometime mid-May.

Having achieved titles such as “musician with a trendy tone” to a “musician with a No. 1 hit,” Suran is continuing to gain recognition, taking the top spot on the charts for over a week. The result of whether or not Suran will transform her rebellious rise in the rankings into a true conquering of the charts is greatly anticipated.

Are you looking forward to hearing Suran’s first mini album?