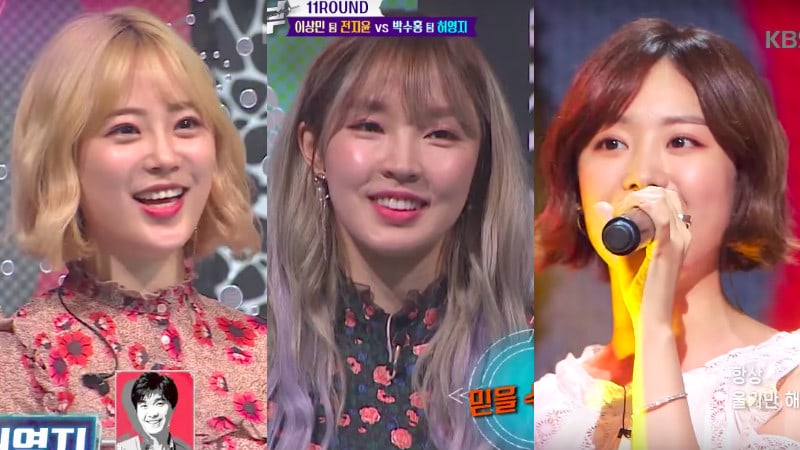 On the May 5 episode of “Singing Battle,” a few girl group seniors and juniors reunited for an exciting competition.

Heo Young Ji first competed against comedian Boom with “My Ear’s Candy,” originally by Baek Ji Young and featuring 2PM’s Taecyeon. Heo Young Ji’s sweet voice led to her victory over the comedian with a score of eleven over two.

Heo Young Ji then selected girl group senior Jeon Jiyoon as her next competitor. Gummy’s “Childish Adult” was selected as their song, and Heo Young Ji expressed that she was less confident about this song. Her team leader Park Soo Hong then called out for their hidden card, who was revealed to be Secret’s Song Ji Eun.

Despite it being a competition, Song Ji Eun and Jeon Jiyoon performed an impressive duet, showing off each of their personal charms. The incredibly close match ended in Song Ji Eun’s win with a score of seven over six.

In the next round, Heo Young Ji faced off against Korean traditional singer Kim Na Ni for a unique duet of Park Ji Yoon’s “Coming of Age Ceremony.” Kim Na Ni won the round, eventually leading to her team’s overall victory for the episode.