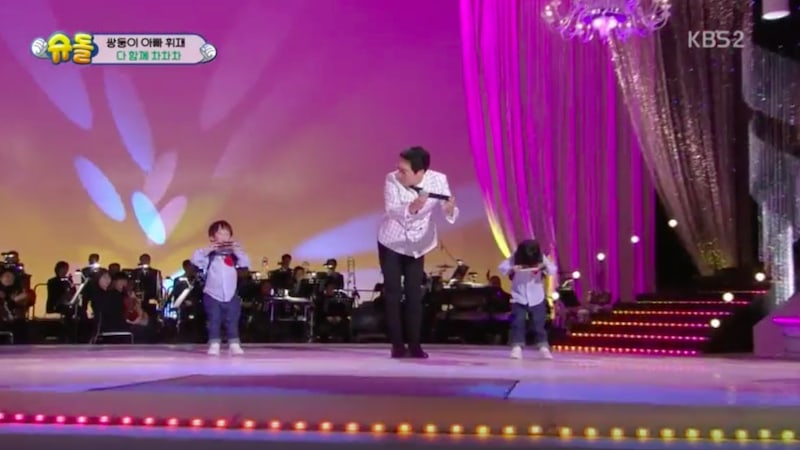 On the latest episode of KBS 2TV’s “The Return of Superman,” Lee Hwi Jae and his twins Seo Jun and Seo Eon prepared for Parents’ Day.

Lee Hwi Jae decided to prepare a special surprise for his ill father who enjoys watching KBS music program “Gayo Stage.” He and his sons went to a recording of “Gayo Stage” and filmed a couple of performances on the set. The trio first performed veteran singer Sul Woon Do’s “Everybody Cha-cha-cha,” and then Lee Hwi Jae sang Insooni’s “Father” by himself.

After the performances, Lee Hwi Jae took his children to his parents’ home and showed his father the video. His father recognized the song, but even as Seo Eon exclaimed “It’s us,” he still did not recognize who was performing, Lee Hwi Jae asked “Are you just pretending not to know?” to make sure, but his father just continuously shook his head. Unfortunately, Lee Hwi Jae’s father suffers from poor eye health and vision.

Lee Hwi Jae tried his best to hold his tears in, but once his father went into his room, he quietly began crying alone against the window. Seo Eon went over to ask what he is doing, and Lee Hwi Jae simply assured him that he is alright.

Watch the full episode below on Viki!

Lee Seo Eon
Lee Seo Jun
The Return of Superman
Lee Hwi Jae
How does this article make you feel?