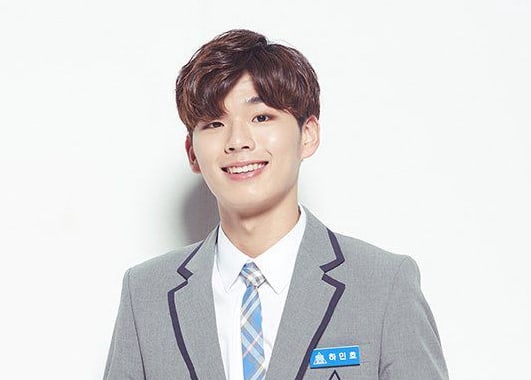 “Produce 101 Season 2” trainee Ha Min Ho is facing backlash for allegedly contacting his fans and attempting to see them personally for a possibly sexual relationship.

Various online community members uploaded a series of screenshots of Instagram Direct Messages (DMs) and Facebook messages that they allegedly interchanged with Ha Min Ho. The Instagram username on many of these screenshots matches with Ha Min Ho’s current username, leading people to believe that these messages were really sent by him. 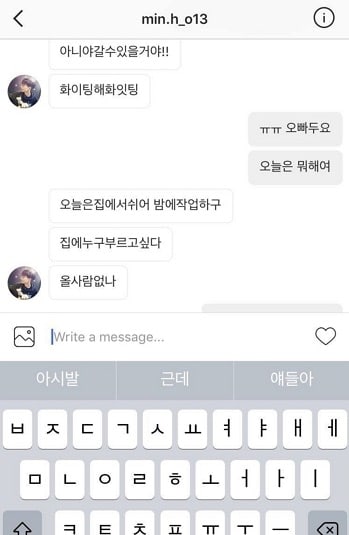 Fan: (henceforth “F”): You too T_T What are you doing today

H: I’m resting at home and working [on music] at night. I want to bring someone home. I wonder if there’s anyone who wants to come. 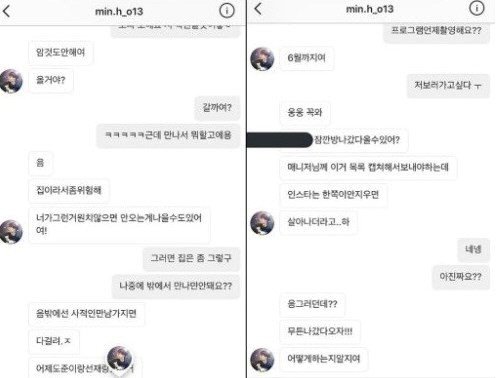 Ha Min Ho (henceforth “H”): I’m not doing anything. Are you going to come?

H: Umm. It’s a bit dangerous because it’s at my house. If you don’t want anything like that, you might be better off not coming!

F: Then going to your house is a bit [too much]. Can we meet later outside?

H: Umm, if I meet anyone outside, I’ll get caught. Yesterday, [I met] Dojoon and Sunjae…

Fan: (henceforth “F”): When are you filming the program?

H: Yeah come. [Fan’s name], can you leave the DM chatroom for a moment? I have to send a screenshot of the list [of DMs] to my manager, and if one side doesn’t delete the chatroom, it stays alive…[sigh]

H: Yeah it seems like it?? Anyway let’s leave and come back!!! You know how to do it, right 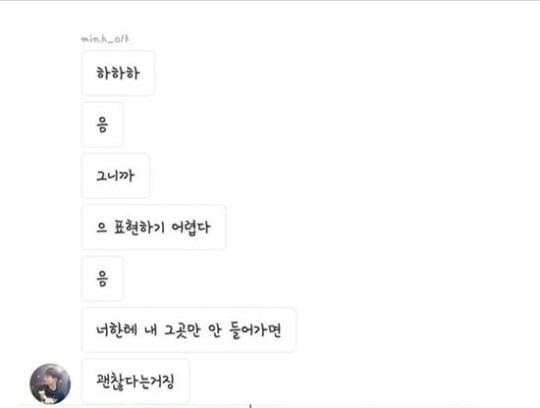 “Ugh this is hard to explain

“It’s okay as long as that part of me doesn’t go into you, right” 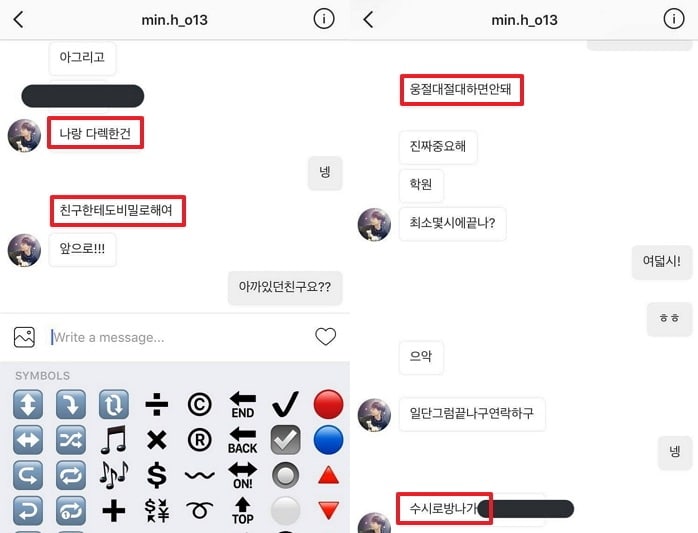 Translation of screen shot above

Ha Min Ho (henceforth “H”): Oh and, about exchanging DMs with me

H: Keep it a secret from your friend too from now on!!!

F: The friend from a while ago?

H: Yeah, you absolutely cannot tell [anyone]. It’s really important. When does your cram school end?

H: And keep leaving the chatroom from time to time 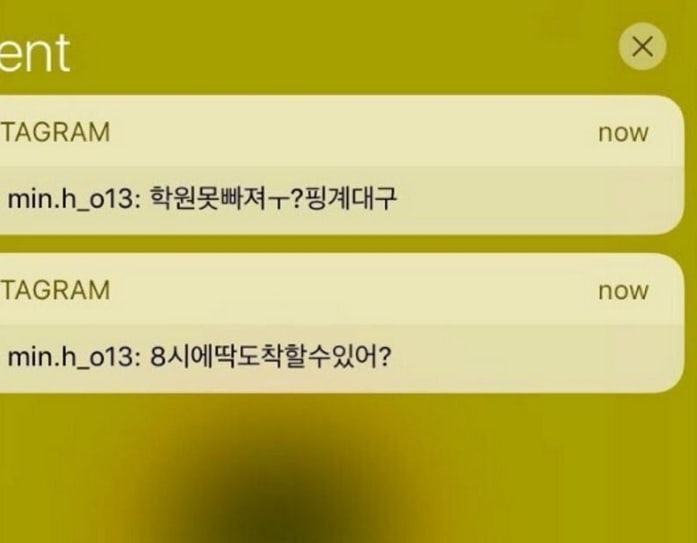 “Can you get there right at eight?” 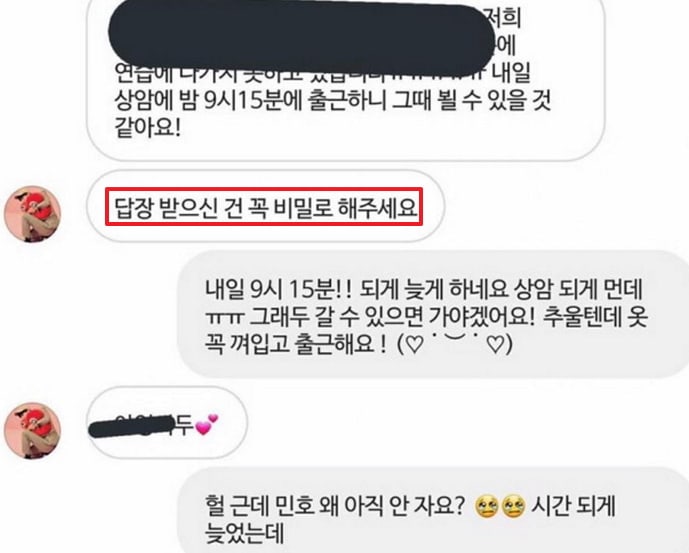 Fan (henceforth “F”): Tomorrow at 9:15! That’s really late, and Sangam’s very far T_T But I should go if I can! It’s cold, so wear lots of clothes on your way to work! 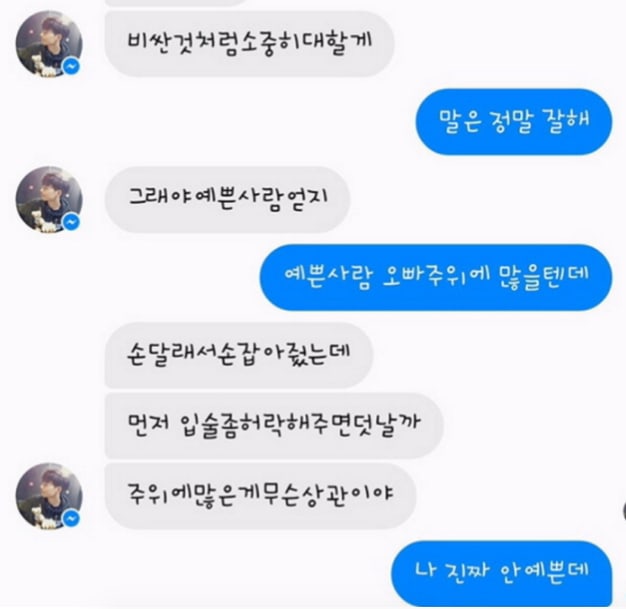 H: That’s how you get someone pretty

F: You probably have lots of pretty girls around you

H: You asked for my hand so I gave it to you. Can’t you allow me your lips? Why does it matter that there are a lot them around me 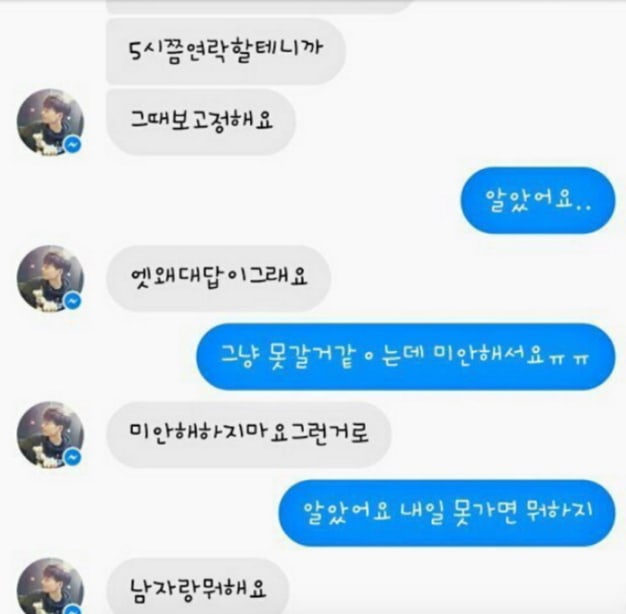 Ha Min Ho (henceforth “H”): I’ll contact you at about five. You can decide then.

H: Huh, what’s with the response?

F: Okay. I wonder what I should do tomorrow if I can’t go.

H: Do something with a guy (unclear translation due to lack of context) 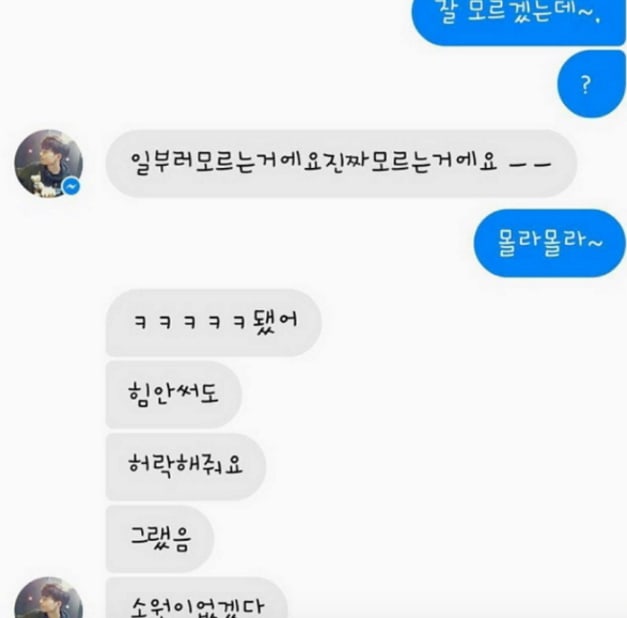 Ha Min Ho (henceforth “H”): Are you pretending not to know or do you really not know -_-

H: Lol, fine. Allow it to me even if I don’t put strength in it. If you did that I’d have no more wishes. 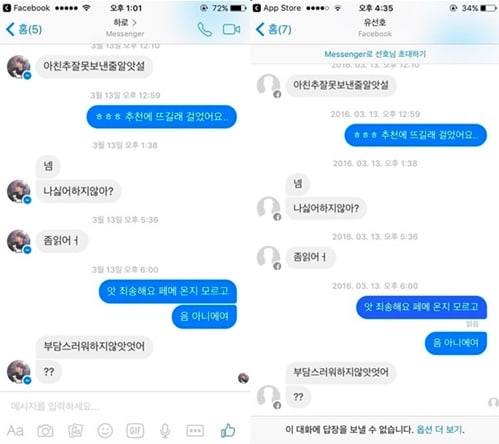 Fan: (henceforth “F”): Hehe, I sent it because you came up in the recommended friends list

H: Weren’t you burdened by me?

The last Facebook conversation screenshot shows that Ha Min Ho changed his account name from “Haro” to “Yoo Seon Ho” before deleting the account. This action is receiving criticism for possibly being an attempt to put the guilt on Yoo Seon Ho, who is another trainee on “Produce 101 Season 2.”

None of the reports have been confirmed. Neither Mnet nor Ha Min Ho’s agency has responded as of yet.