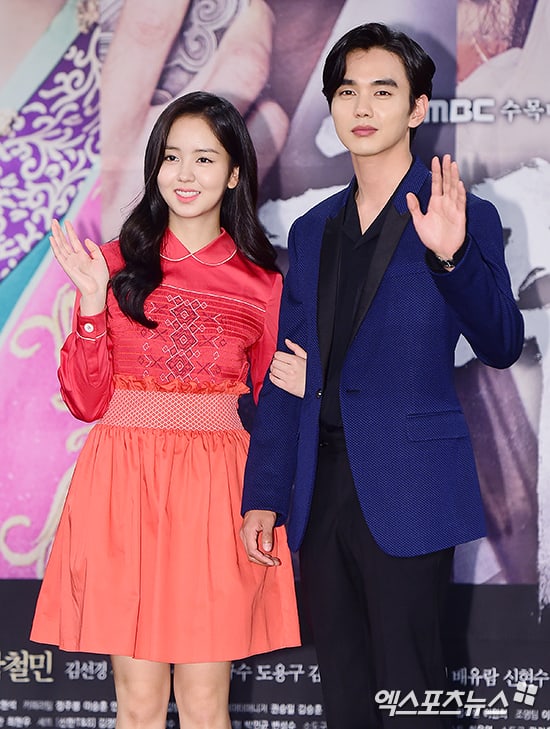 According to her “Ruler: Master of the Mask” co-star Yoo Seung Ho, actress Kim So Hyun is quite the precocious young actress!

On May 8, the two stars attended a promotional press conference for the upcoming MBC drama, where they were joined by the select members of the cast and crew, including INFINITE’s L, Yoon So Hee, Heo Joon Ho, Park Chul Min, and production director No Do Chul.

During the event, Yoo Seung Ho touched upon the first time he met his co-lead, stating that even though he knew that she was six years younger than him, he couldn’t stop speaking to her like she was older.

“She seems like an older sister. She’s extremely mature,” the actor bashfully confessed before offering her a quick apology.

“Once I began talking to her a bit, I felt that speaking comfortably with her was extremely difficult,” he added before expressing his admiration for his co-star. “It is really great that I am able to shoot [a drama] alongside So Hyun.”

Later, veteran actor Park Chul Min admitted he felt similar about Yoo Seung Ho, adding that even called the junior actor “older brother” on set because he is “nature mature and deep-thinking, and shows consideration for others.”

“It feels like there is hardly an age difference between me and Seung Ho. I did not see him very often when we first met, but because we have been together since we were child actors, I thought that we would be comfortable together,” Kim So Hyun admitted, referring to when the two appeared on the 2013 drama “I Miss You.”

“However, when we met again after such a long time, it was extremely awkward because he was nervous and shy. I thought that he was just shy with strangers. Once we got into filming, however, he was a charming and playful actor, so we matched well on set and had fun filming together. There are so many reasons I’m grateful [to work with him].”

Meanwhile, “Ruler: Master of the Mask” will tell the story of a Joseon era prince’s struggle to fight against a powerful and corrupt organization monopolizing the Korean peninsula’s water supply. The drama will air every Wednesday and Thursday on MBC starting on May 10.

Kim So Hyun
Park Chul Min
Yoo Seung Ho
Ruler: Master of the Mask
XPN
How does this article make you feel?