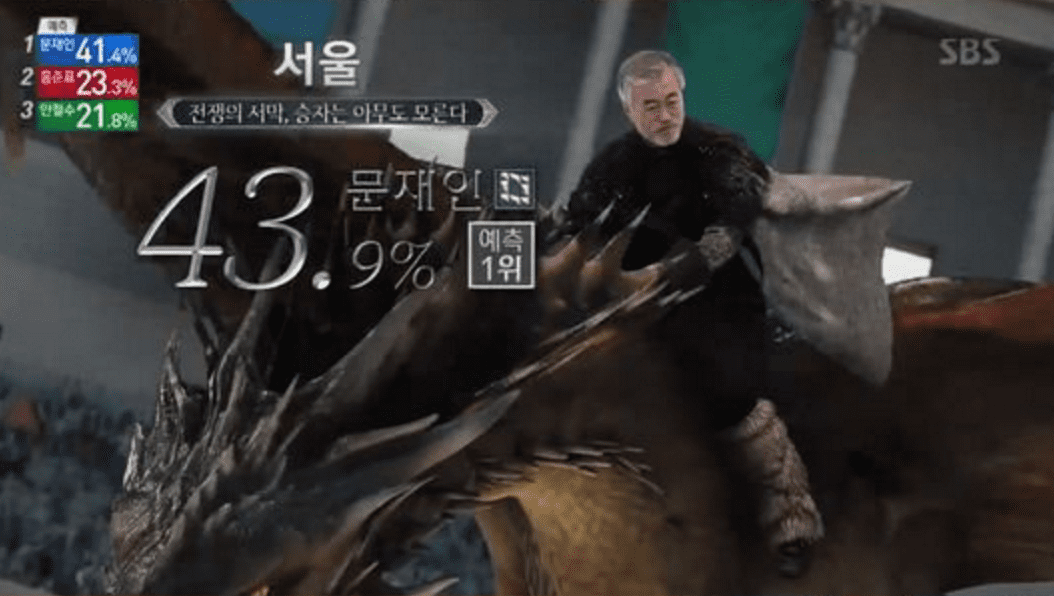 On May 9, South Korea held its 19th presidential election after the previous president, Park Geun Hye, was removed from the presidency following a corruption scandal that rocked the country.

See also: Celebrities Complete Their Civic Duty And Vote For Korea’s Next President On Election Day

But official election coverage from South Korea’s major TV networks – the public broadcasters KBS, MBC, SBS – didn’t show the simple percentages and pie graphs that one might expect as votes were tallied. Instead, the networks went all-out on some pretty intense graphics referencing dozens of pop culture memes including “Game of Thrones,” “Pokemon Go,” “Detective Conan,” “Mortal Kombat,” “Show Me the Money,” and more.

The “Game of Thrones” graphics garnered the most attention, with the presidential candidates’ faces photoshopped over “Game of Thrones” characters’ bodies as the iconic theme song played in the background. It was an interesting comparison as “Game of Thrones” often features the intense political conflict, potential warfare with neighboring lands, and family-based corruption that were key issues in the South Korean election.

After the polls began announcing that liberal candidate Moon Jae In had taken the lead ahead of his competitors, some networks began airing graphics that mimicked “Pokemon Go,” with the leading candidate being “captured” with a Pokeball.

SBS’s election coverage alone included graphics from pro wrestling and “Show Me the Money” among others.

One graphic showed three presidential candidates “dabbing”, a dance move that has become a pop culture meme. However, in East Asia, this is also a “Detective Conan” reference since it looks like the dance that the anime character performs in one of his openings (“Love is Thrill, Shock, Suspense”).

The upcoming 2018 Pyeongchang Olympics were also featured in one graphic.

Although many of these graphics came from SBS, MBC didn’t lose out on the competition with “Mortal Kombat”-style graphics.

You can check out many of these graphics and more on Twitter Moments as the world took notice of what was going on.

Moon Jae In
19th presidential election
How does this article make you feel?