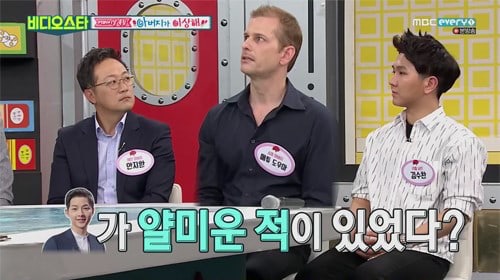 Their appearance together in KBS’s “Descendants of the Sun” was brief, but it looks like Song Joong Ki made a lasting impression on his fellow co-star, Matthew Douma!

Also known as the father of Jeon Somi, Matthew Douma was one of the many celebrities’ fathers that appeared on the May 9 broadcast of MBC Every1’s “Video Star.”

When he was questioned about his appearance on the popular KBS drama as well as its main actor Song Joong Ki, Matthew Douma expressed how frustratingly kind his co-star is.

“There’s only one thing about Song Joong Ki that is spiteful. He’s too well-rounded of a person. There’s nothing to criticize about him,” he explained. 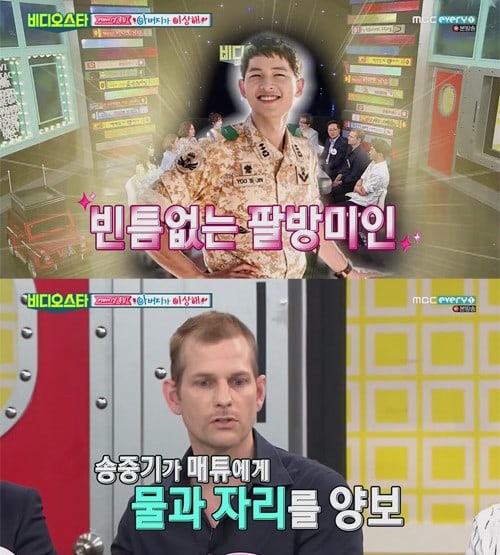 Recalling back to when they met for “Descendants of the Sun,” Matthew Douma continued, “We were covered in bruises after filming for several hours, and there wasn’t a separate place set up for me while we were resting. But Song Joong Ki gave up his seat for me, and handed me the water he was about to drink as well. There was also a separate shower stall set up for Song Joong Ki, but he would let me go first. He is extremely thoughtful.”

Matthew Douma also revealed that his fellow actor was quite good at English, even with more advanced expressions. “I wish, at least for my own conscience, that there was something about him that I could hate. But he’s too perfect,” he amusingly added.

Meanwhile, Matthew Douma also discussed during the show how he helped his older daughter Jeon Somi follow her dreams, and opened up about his younger daughter Evelyn as well.

Song Joong Ki
Descendants of the Sun
Matthew Douma
Video Star
How does this article make you feel?