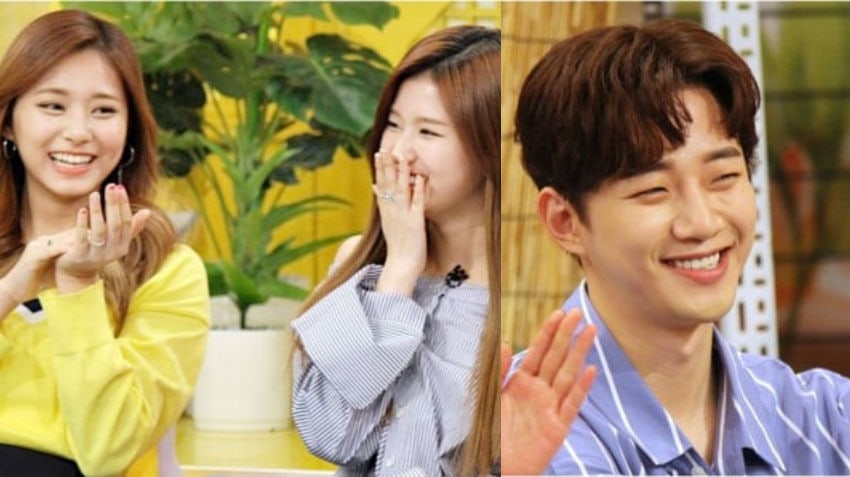 TWICE’s Sana and Tzuyu will be telling the viewers some funny stories on KBS 2TV’s “Happy Together”!

During a recent recording of the show, with Sana and Tzuyu as well as 2PM’s Junho as guests, the TWICE members talked about getting a song that was written and produced by Park Jin Young himself for the first time since debut.

Tzuyu and Sana revealed that there are some parts of the choreography that involved Park Jin Young’s cute aegyo, making everyone’s jaw drop open; no one could even imagine Park Jin Young acting cute. However, Sana said calmly, “Park Jin Young shows us aegyo quite often. He does ‘sha sha sha’ sometimes, and sometimes even shoots us hearts.”

However, at this statement, their JYP Entertainment senior, Junho, piped up in anger. He said, “To 2PM, he doesn’t shoot hearts at all! He only ever swears at us, saying that we’re bad at singing.” However, his anger only lasted a short time as he said, “Actually, on second thought, Park Jin Young shooting hearts at us would be creepy.”

Meanwhile, it was relayed that Sana and Tzuyu also gave a short spoiler of their new song and choreography, making it yet another thing to look forward to on the show.

TWICE
Sana
Tzuyu
2PM
Happy Together
Junho
How does this article make you feel?