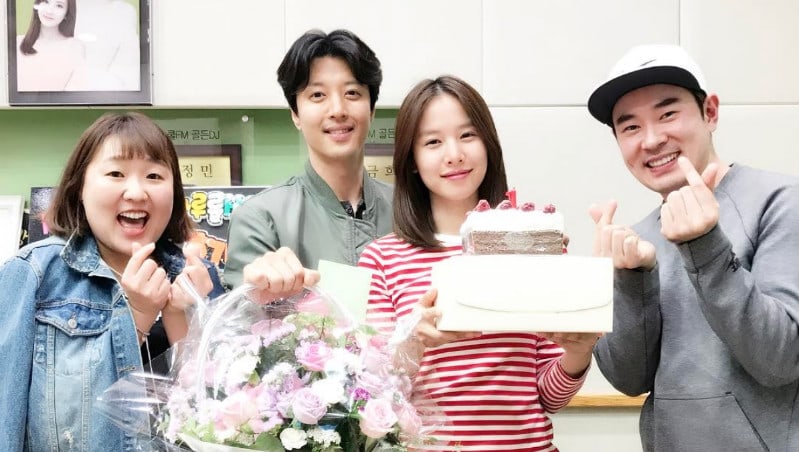 Recently, Lee Dong Gun and Jo Yoon Hee surprised everyone by revealing that they are legally married and expecting a baby. Following this breaking news, on May 9, Lee Dong Gun appeared as a special guest on KBS Cool FM’s “Jo Yoon Hee’s Raise the Volume” to support and congratulate his wife for the program’s one-year anniversary. At first, he was only supposed to appear as a guest by calling in, but he surprised his wife by appearing in person during the third segment of the show.

Furthermore, during the broadcast, the two lovebirds spoke very sweetly of each other and left listeners in envy. Lee Dong Gun started off the segment by introducing himself as Jo Yoon Hee’s husband. Jo Yoon Hee responded, “There have been many changes during the year I spent as a radio DJ. This is the first time broadcasting after becoming an official couple and I don’t know what to say. I’m so flustered!”

Later on, the couple also revealed small and sweet details about their relationship. For example, they told the listeners that their first kiss was inside a car, and when Jo Yoon Hee was asked what made her fall for her husband, she replied, “His kindness and thoughtfulness. I don’t pay attention to looks.” She also shared how Lee Dong Gun was so caring towards her and would buy her good things to eat before and after her radio program. Finally, when asked what the most memorable event from the past year was, Lee Dong Gun said, “When we conceived our child.”

What do you think about this new celebrity couple?