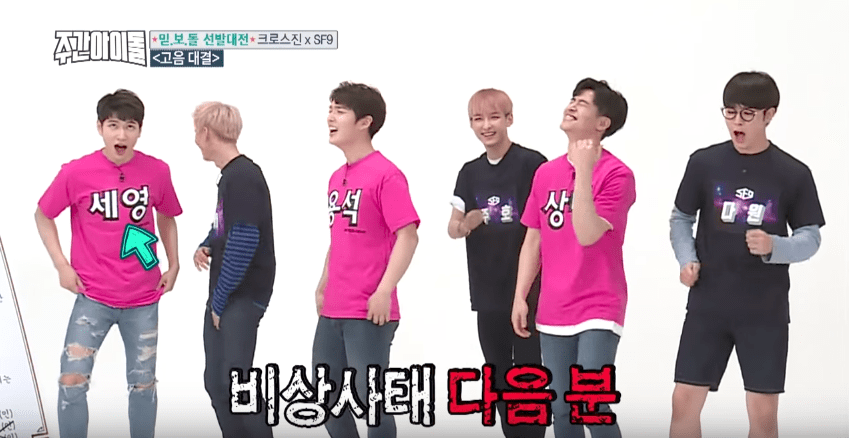 The notes these idols can sing (or screech)!

On May 10, CROSS GENE and SF9 finally made an appearance on MBC Every1’s popular variety program, “Weekly Idol,” where they faced off for the title of “Variety Idol King.”

During one of the segments, the two groups battled it out in one of the most hilarious battles ever to see who could sing the highest.

CROSS GENE’s Yongsuk started things off on a easy note, but things quickly escalated when SF9’s Dawon jumped octaves, prompting CROSS GENE’s Sangmin, and everyone behind him, to take things even higher.

CROSS GENE’s Takuya, despite giving it his all and pulling on his own hair, ended up being the first to be eliminated. The second round then proceeded in a similar manner, with CROSS GENE’s Seyoung eliminated, thanks to Dawon’s sudden attack with another octave jump.

The following round was the real scene stealer however, as two of the SF9 members, quite literally, reached new heights with their voices. As the round progressed, Sangmin tried his best to stop Dawon in his tracks by vocalizing a pretty impressive high note. However, he was still no match for Dawon, who proceeded to go even higher with the help of his hair, although by this point, they were no longer singing.

Just when you think the game is over, SF9’s Hwiyoung suddenly called upon his inner dolphin and literally screeched out the highest pitch ever, easily defeating everyone else.

The real kicker was when two of the top finalists, Sangmin and Hwiyoung, revealed that they were actually rappers in their respective groups, and not vocalists like Jung Hyung Don assumed.

Watch all the hilarity for yourself below! (Headphone users, beware. It can get pretty painful.)

SF9
Weekly Idol
CROSS GENE
How does this article make you feel?