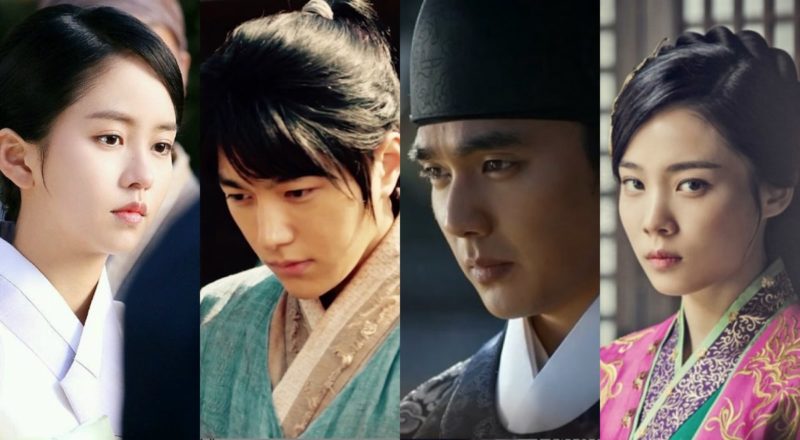 First Impressions: “Ruler: Master Of The Mask” Is The Sageuk We’ve Been Waiting For

There’s been a lot of hype leading up to “Ruler: Master of the Mask,” and MBC’s new Wednesday-Thursday historical drama is finally here! 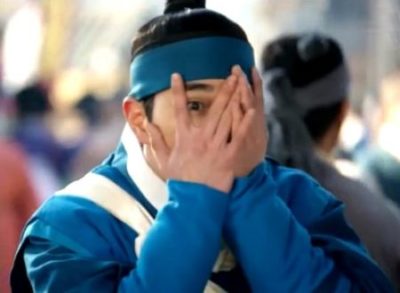 With a highly-anticipated cast and an abundance of intriguing teasers, “Ruler” has been on my radar for a while, and its first week did not disappoint. If you love historical dramas, charming male leads, beautiful cinematography, or all of the above, you’re in for a treat.

Want to know about the first week’s episodes of “Ruler: Master of the Mask”? Keep reading to find out!

Warning: some spoilers ahead!

First off, what impressed me the most about this drama was the aesthetic appeal; “Ruler” is simply gorgeous to watch. The scenes are beautifully shot and filled with stunning landscapes, sumptuous robes, and flickering candlelight. 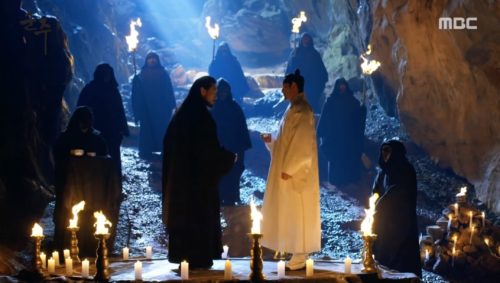 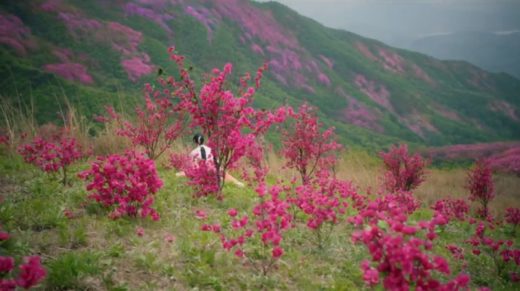 Now, allow me to introduce our lead, Crown Prince Lee Sun (Yoo Seung Ho). He’s a young Joseon-era prince who has had to live his entire life wearing a mask — and he’s beginning to question why. 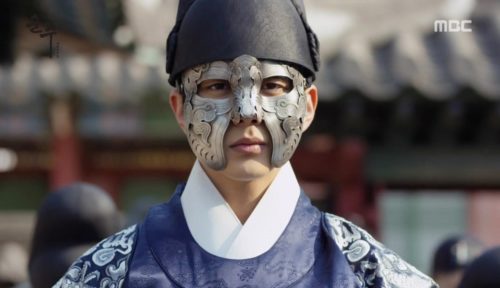 I have to say how absolutely perfect Yoo Seung Ho is in this role. Every facial expression and gesture of his is totally compelling and conveys the youthful innocence of a sheltered prince. Lee Sun is idealistic and so genuinely wants to help people and make friends that it’s easy to root for him. Plus, you know, that smile…. 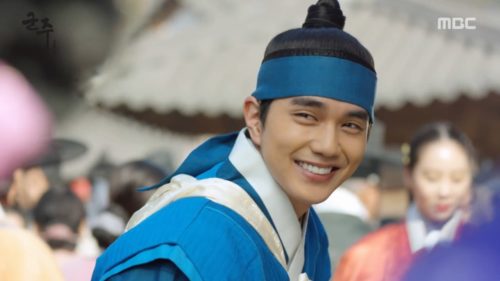 Another character we get to know is our villain, Dae Mok (Heo Joon Ho). Dae Mok is the leader of the Pyunsoohwe, a cult-like group that has power over the royal family and has monopolized the water supply of Joseon. Oh, and is set on inducting Crown Prince Lee Sun into its ranks. 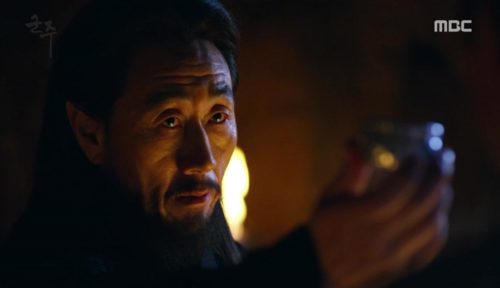 We also meet Kim Hwa Goon (Yoon So Hee), who is equal parts devious and haughty — it’s clear that this girl is used to getting what she wants. She’s also Dae Mok’s granddaughter and therefore a born enemy to the Crown Prince… which makes it awkward that she falls in love with him as soon as she lays eyes on him.

I mean, can we really blame her?

To complete the love triangle, we have female lead Han Ga Eun (Kim So Hyun). We don’t know much about her yet, except that she’s caring and intelligent, and a pupil of Woo Bo (Park Chul Min). And she has already worked her way into Prince Lee Sun’s heart. 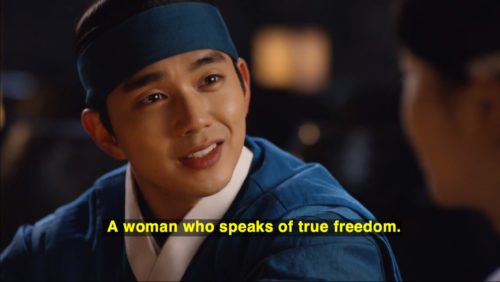 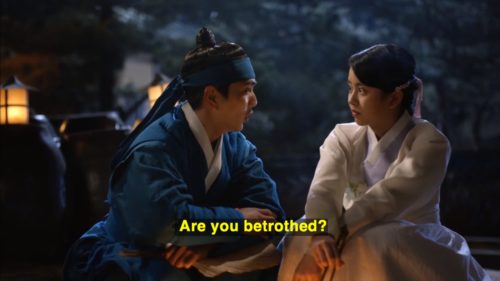 I know a lot of people are excited to see INFINITE’s L in his role as the other Lee Sun, a commoner who shares the Crown Prince’s name. I wasn’t sold on this character at first because he seemed to have two moods: sulky and angry. But it’s clear there are going to be some major changes ahead of him, and I’m looking forward to seeing what the drama has in store for him.

Crown Prince Lee Sun’s father, the king of Joseon, is a member of the Pyunsoohwe. When Lee Sun is born, the Pyunsoohwe threatens the prince’s life and demands that the king grant them control of Joseon’s water supply and promise that Lee Sun will also someday join the Pyunsoohwe himself. The king is forced to give in, but is determined to raise his son to be a strong, independent ruler, free of the Pyunsoohwe — so he does what any father would do (erm, right?) and makes the prince wear a mask to hide his identity, then spreads a rumor that the prince’s face was badly disfigured by a childhood illness.

I’m not quite sure how just hiding the prince’s face is enough to protect him from the Pyunsoohwe, but I’ll go with it.

Flash forward to Prince Lee Sun’s teenage years: the Pyunsoohwe has monopolized Joseon’s water, and the Crown Prince wants to know why he’s been forced to hide behind a mask. In search of answers, Prince Lee Sun disobeys his father and removes his mask to go galavanting around town, where he soon meets Ga Eun and the commoner Lee Sun and learns the ugly truth about the water situation in his country. 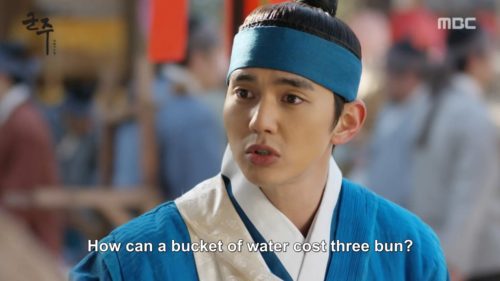 We don’t see anything too unexpected in the storyline for the first week, but the drama does a good job of laying out the foundation of the plot for us while still being interesting. The pacing was also well done, and the show didn’t try to introduce too much at once or rush into the romance, which some dramas fall prey to. But thanks to the teasers, we know we have some political and romantic twists ahead of us, and I am more than ready to sit back and enjoy the ride.

I’ll admit it, I was a huge fan of the first week of “Ruler.” The drama is beautifully produced, the storyline is fulfilling all my sageuk dreams, and I like what I’ve seen of the acting and characters so far. “Ruler” also struck a good balance between the lighthearted and the serious, and there were more funny moments than I expected, mostly thanks to Yoo Seung Ho’s cuteness. 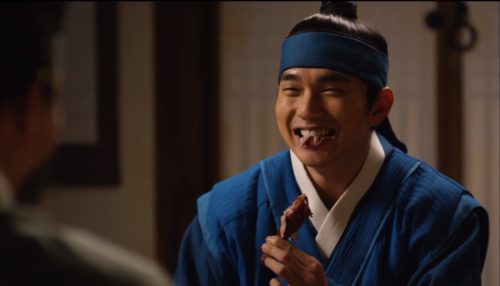 There were also some heart-wrenching parts that I was not prepared for, which hit me hard, and I was surprised that the drama was able to deliver such convincingly emotional scenes so early on. It’s definitely a sign that the drama is well-acted and has a plot that is easy to become emotionally invested in.

I’m trying not to get too excited, mainly because Crown Prince Lee Sun reminds me of a mash-up of plot lines from “Scarlet Heart: Goryeo” and “Hwarang,” and while I found both of those dramas entertaining enough, I wasn’t thrilled with the direction either ultimately went in. 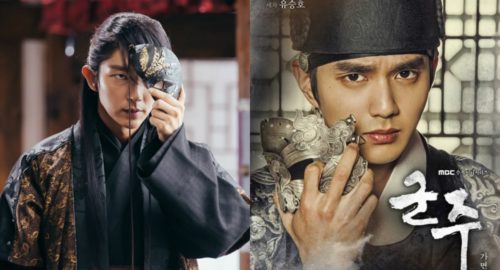 Masks are apparently in right now if you’re a sageuk prince.

But I’m hopeful that “Ruler” will take a new route, and Yoo Seung Ho is so exceptional as Lee Sun that it’s hard for me to imagine a drama with such a solid and likable hero falling short of expectations. I’m excited to see what this drama has in store for us — can it be Wednesday already?

What do you think of “Ruler: Master of the Mask” so far? Let us know in the comments below!