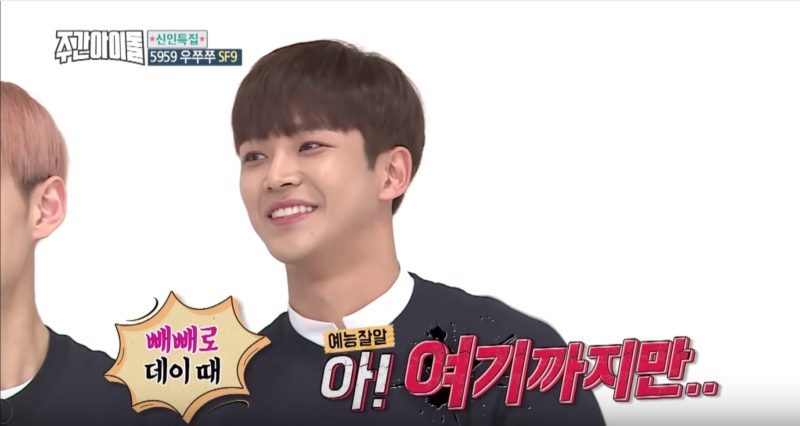 On the May 10 broadcast of “Weekly Idol,” SF9 made a guest appearance.

Hosts Jung Hyung Don and Defconn commented that they had heard SF9’s Rowoon was known as a “face genius” (a term that means he is visually blessed).

Rowoon wittily replied, “I think ‘genius’ is going too far. I’m more like a ‘prodigy.'” Instead, he humbly said that the real “face genius” was ASTRO’s Cha Eun Woo.

When host Defconn said that Rowoon must have enjoyed a lot of popularity in school, Rowoon said, “I was just was a regular student. I was a trainee from a very young age.” Defconn followed up with the guess that Rowoon still must have gotten a lot of attention from the other students around him, but Rowoon simply explained, “I attended all boys schools for junior high and high school.”

Jung Hyung Don then asked if girls came from other schools to see Rowoon. Rowoon began to share, “Well, on Pepero Day… ah, actually I’ll only say that much,” causing the hosts to break out in laughter over how he cleverly handled the situation. Pepero Day is a day in Korea where people gift their friends, loved ones, and/or crushes with the Pepero treat. It is celebrated on November 11 because the date resembles Pepero when written numerically.

Meanwhile, SF9 also faced off in a series of hilarious games with CROSS GENE during this broadcast, such as a screeching high note battle.

SF9
Weekly Idol
Rowoon
How does this article make you feel?