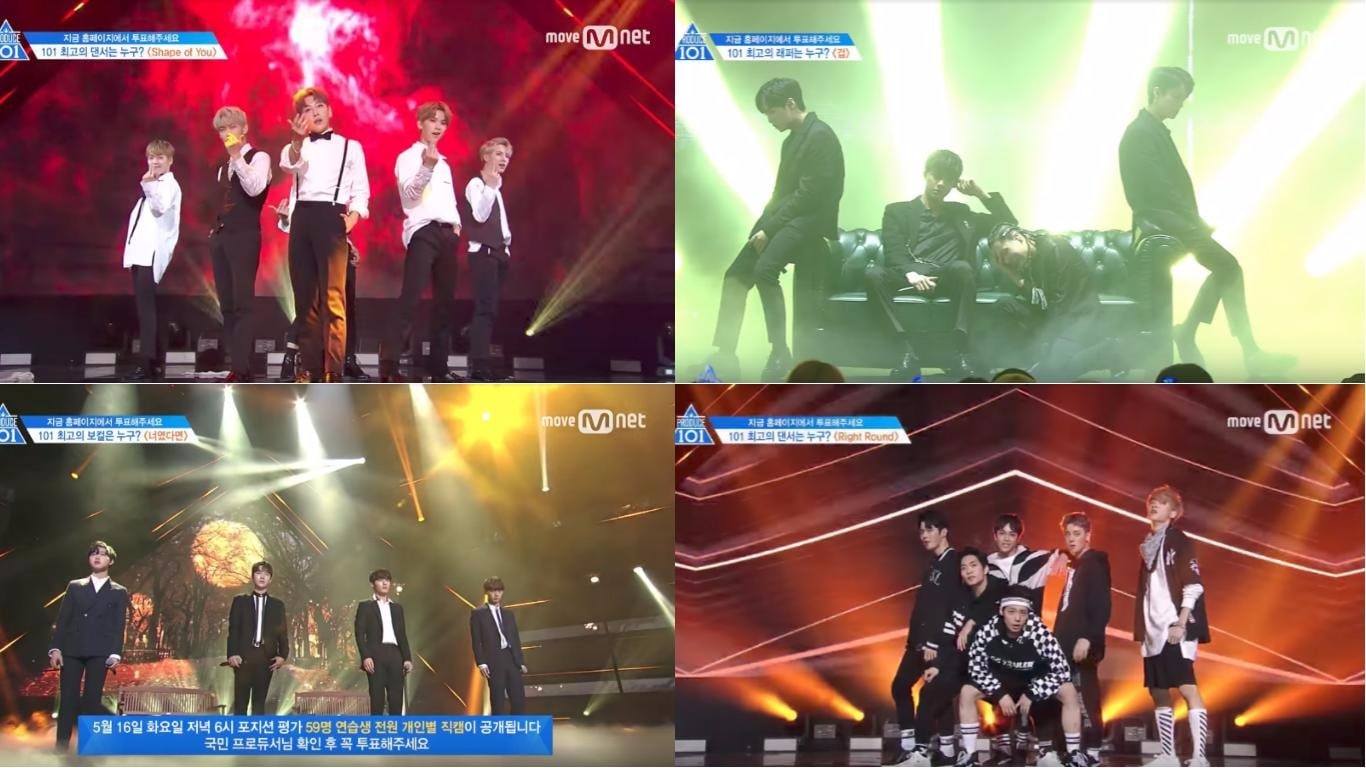 Watch: “Produce 101 Season 2” Trainees Go Above And Beyond With Performances For Position-Based Challenge

With their first elimination behind them, the trainees of Mnet’s “Produce 101 Season 2” kicked it up another notch this week with their position-based challenge.

Just like last season, trainees, according to their ranks, had to choose the song they wish to perform in one of three categories, vocal, dance, and rap. The benefits of coming out on top include an extra 10,000 points added to their score. In addition, the top contender in each of these categories, would receive another 100,000 points.

First up on stage was four vocalists covering Jung Seung Hwan’s “If It Is You.” Led by trainee Joo Jin Woo and with Kim Sung Ri as the center, the group had earned high praises from their vocal trainer Lee Suk Hoon, especially Kim Yong Guk. Their performance didn’t disappoint as well, and Kim Yong Guk marked first place amongst these four.

Next up was a dance team, with Hong Eun Ki as their leader and Yeo Hwan Woong as the center. While there was tension between the leader and Joo Hak Nyeon, who had also requested the center position, one heartfelt conversation later and the team managed to pull it together to finally earn the praise of their trainers during practice. During their actual performance, they successfully pulled off and performed an energetic choreography to Flo Rida’s “Right Round.” In the end, Joo Hak Nyeon came out on top in first place in this group.

The next group took on a rap challenge, as they performed Zico’s “Boys & Girls.” Despite this being his very first time to rap, Kim Dong Bin managed to successfully pull off his part with the continued help of teammate Im Young Min, who never gave up on him. While there was an unfortunate mistake, the overall atmosphere was positive as they showed off their skills. Team center Im Young Min teared up when it was announced he was first in his group.

As both the center and the leader, Noh Tae Hyun helped his group shine as they performed an amazing self-made choreography to Ed Sheeran’s popular hit, “Shape of You.” Not only did their trainers highly laud their performance and say “it was so cool,” the audience loved it so much they called for an encore. Noh Tae Hyun placed first, with many saying it was well-deserved.

The next emotionally-charged performance took on the popular hit track, Song Mino’s “Fear” from his time on “Show Me the Money.” With their self-written lyrics, trainees Lai Guan Lin, Kim Jong Hyun, Jang Moon Bok, and Kim Tae Min touched the audience not only with their passion, but also their evident improvement. In the end, Kim Jong Hyun placed first amongst his teammates.

The last performance of the episode featured a vocal cover of BLACKPINK’s “Playing With Fire.” This team also encountered many obstacles during preparations, but it ended up paying off with their unique cover of the girl group’s hit. Kang Dong Ho took center stage, while Jung Se Woon was decided upon as the leader. In the end, Jung Se Woon came out on top, an unexpected but well-received surprise.

While their performance will be shown next week, the next group has already been deemed as the “Avengers” team of the season. Based on last week’s rankings, first place Park Ji Hoon, second place Kim Samuel, fourth place Ong Sung Woo, fifth place Kang Daniel, sixth place Ahn Hyung Sub, and twenty-fourth place Park Woo Jin all decided to join the “Get Ugly” team.

Stay tuned for next week to see how this highly anticipated team will do!

Which one of these performances was your favorite?

Edit: This article has been edited for accuracy.