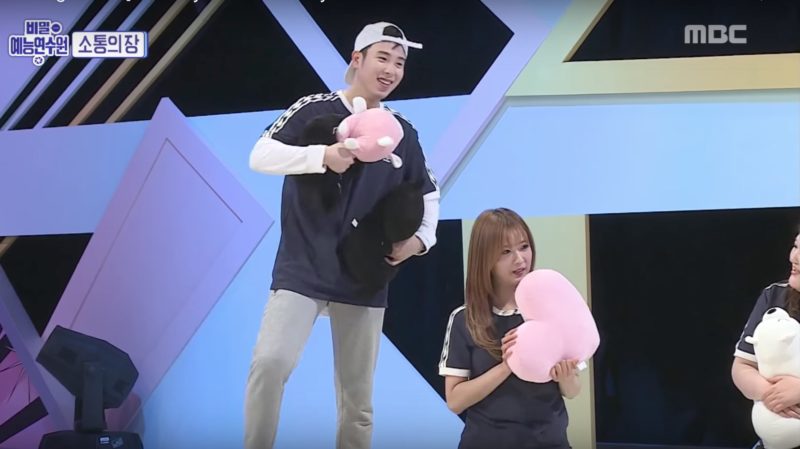 Watch: Apink’s Bomi And Block B’s P.O Blush Because Everyone Is Shipping Them

Apink’s Bomi and Block B’s P.O both had something to blush about on the pilot episode of MBC’s new variety show, “Secret Variety Training Institute” that aired on May 5.

During the ‘communication corner,’ P.O had to answer the question, “If you must date someone out of the members present in the studio, who would you pick?” Immediately, the rest of the members became excited to hear P.O’s answer and emphasized that he “must” choose someone no matter what.

Song Mino made sure not to waste an opportunity to tease his best friend. As P.O hesitated to speak, Song Mino pretended to casually let slip, “Just answer honestly. After all, you kept talking about it earlier,” causing a fresh wave of anticipation and laughter to crash over the group.

As P.O prepared to answer, the show shared a clip of P.O talking about Bomi to another cast member during a different segment. Although P.O could not see Bomi because she was in a different section of the studio, after overhearing her laughter, P.O had remarked to fellow cast member Han Dong Geun, “I think Bomi has a really great personality.” After that flashback moment, the screen returned to P.O who answered that out of the members he would choose to date Bomi. As soon as he gave his answer, P.O ran to hide out of shyness. 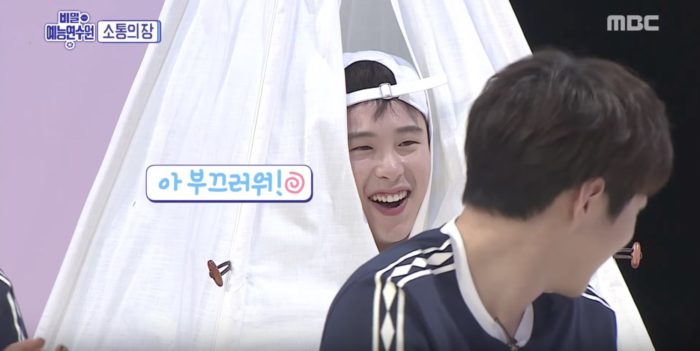 When the hosts asked why he chose Bomi, however, P.O gave multiple reasons. Nervously twisting the plushie in his hands, P.O said, “She’s famous for eating well, and I like someone who eats well. I like that she is good at using chopsticks.” After MC Haha jumped in and said, “I feel like there’s more,” P.O continued on to say, “She has a bright personality and is pretty when she smiles.”

MC Haha then asked Bomi who she would date if she had to choose someone from among the members, encouraging her to ignore the other giddy members and just answer honestly.

Once again, the show cutaway to flashbacks related to the dynamic between Bomi and P.O. The interactions between the two were interesting enough to have caught the eye of other cast members, as a conversation between 2AM’s Jeong Jinwoon and Akdong Musician’s Lee Soo Hyun revealed.

Jeong Jinwoon said, “Let’s help them get together by the end [of filming].” In response, Lee Soo Hyun commented, “[Bomi and P.O] keep standing so that I am in between them,” while Jeong Jinwoon wondered, “Does [Bomi] have a boyfriend? It would be good if she didn’t have one.” Other clips showed P.O sneaking glances at Bomi, initiating conversation, and the pair laughing together.

As the clips ended and returned to Bomi announcing her choice, P.O hid his face from view. Ultimately, Bomi chose P.O as well. After Bomi said his name, P.O quickly ran to hide again, the other members in the studio exploded in excitement, and Bomi bashfully tried to calm everyone down.

When asked why she picked P.O, Bomi explained, “I normally like guys with a lot of aegyo.”

Although it was all in fun, Bomi and P.O’s interactions are sweet to see, especially considering how rare it is for these two seasoned idols to appear nervous on stage these days.

Catch the full clip below (you can turn on English subtitles)!

Apink
Block B
P.O
Yoon Bomi
How does this article make you feel?