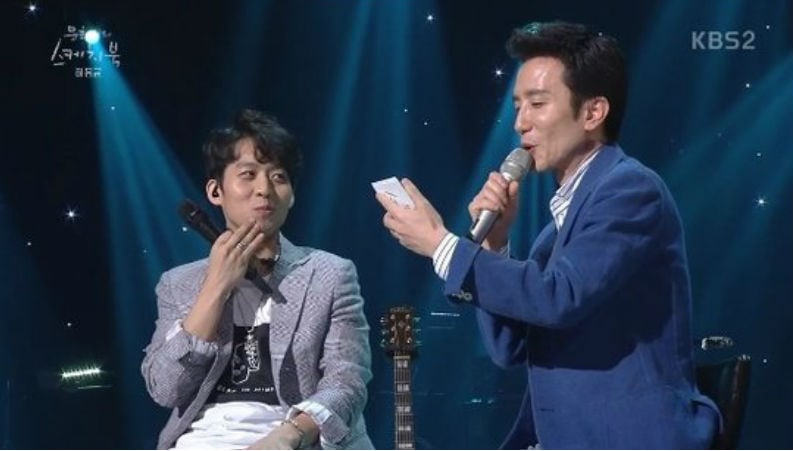 On the May 14 broadcast of “Yoo Hee Yeol’s Sketchbook,” singer Ha Dong Kyun shared about his past experience as IU‘s vocal trainer.

Host Yoo Hee Yeol introduced Ha Dong Kyun through IU’s words, “The man who has given me the hardest time up to this point in life.” According to what Yoo Hee Yeol said he had heard from IU, Ha Dong Kyun would critique IU’s singing by saying things like, “Hey, you can’t sing,” “Your voice is weird,” and “Go back to Uijeongbu” (Uijeongbu was where IU’s family lived at the time). The audience broke out in laughter at the last statement, however, as Yoo Hee Yeol remarked that it was the most immature comment of them all.

Ha Dong Kyun tried to explain, “Well, I’m sure that I did say that, but it would not have been just me. Everyone used to say, ‘If you’re going to do it like that, go back to Uijeongbu.'” Ha Dong Kyun then said, “Now [IU] rules Uijeongbu,” and jokingly asked her, “How about finding me a job somewhere in the area?” In reply to the joke, Yoo Hee Yeol simply said, “So shameless,” before he finished by saying, “I didn’t know IU would become so successful. It’s something to celebrate.”

After performing his latest single, “The Maze of Reality,” Ha Dong Kyun revealed, “IU did the chorus for me.” In response, Yoo Hee Yeol marveled, “The only person now who can have IU do the chorus for them is Ha Dong Kyun. You should have just gone ahead and named the song after IU.”

IU previously posted on her Instagram about participating in the chorus of the song, as shown below.

Although Ha Dong Kyun’s vocal training style sounds like it was a little harsh, it does not seem to have prevented him from being on good terms with IU now.