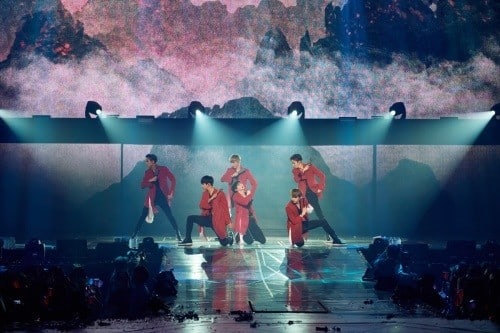 On May 14, VIXX appeared on MBC’s “Section TV,” where they talked about their concert and upcoming album.

The group performed their comeback song “Do Won Kyung (Peach Blossom Spring)” for the first time at their solo concert “VIXX Live Fantasia – Daydream,” which was held from May 12 to May 14.

During an interview, they were asked about what everyone is in charge of at their dorm. When the members chose Ken as the one in charge of being noisy, Ken explained why, saying, “When I play games, I often want to scream or curse. When I’m with the members, I say everything I want to say.”

Another question asked, “Does it make you cringe when you see N act?” and Leo replied with a “Yes.” He said, “We lived together for a long time, so I can’t stand seeing our members acting like they’re cool.” Told that he also acts cool on stage, he replied, “I get embarrassed about myself too.”

The show also shared a short footage from their performance of “Do Won Kyung (Peach Blossom Spring),” as well a part of their music video that was not revealed through their teaser.

VIXX
MBC Section TV Entertainment Relay
How does this article make you feel?