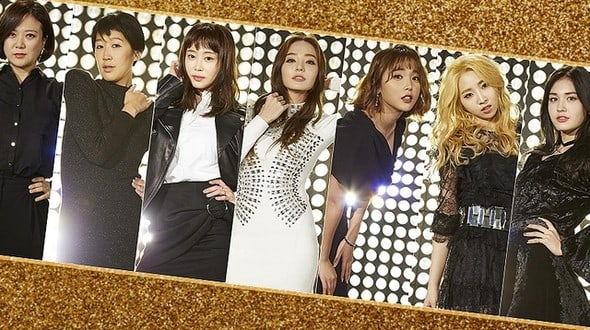 On May 15, “Sister’s Slam Dunk Season 2” held a Naver V Live broadcast to talk about their recent debut and the end of their promotions.

As their last official schedule, the Unnies performed at a festival for Konkuk University. They held their last V app broadcast with their fans just before the performance.

Hong Jin Young thanked everyone for helping their song “Right?” reach No. 1 on the music charts. “I’m grateful that we’re still at No. 1,” she said. “It’s all due to our fans. It’s a miracle. We thought it would be great even if we got into the Top 50 but for four days in a row we’ve been at No. 1.”

Many of the commenters asked about the possibility of a third season. Kang Ye Won said, “Among the cast, there’s no longer any debate about Season 3. We would definitely do it.”

The producing director (PD), Park In Suk, said, “I’m curious too. I wish I could know what our chief at Yeouido [where the KBS building is located] thinks. He’s a good person. I think it would be good if the viewers who want a Season 3 leave comments about it on the viewer message boards.”

Kim Sook added, “We all want to do it but there are a lot of other circumstances going on, including reorganization at KBS.”