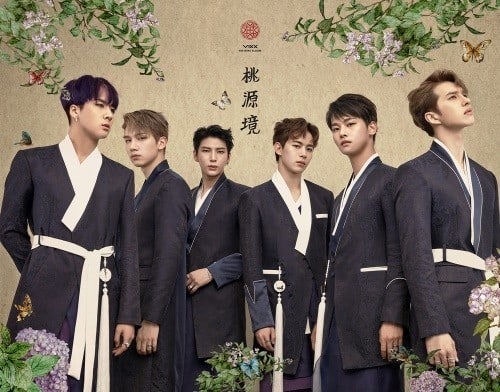 VIXX is back and they’re on the top of Hanteo’s album sales chart with their new album, “Shangri-La.”

Jellyfish Entertainment announced on May 16 that the two versions of VIXX’s fourth mini album have taken the top two spots on Hanteo’s daily chart (May 15 statistics).

Released to commemorate the fifth anniversary of the idol group, the two versions of the album were based off of the motif of birth flowers and birth stones. The birth flower version topped the charts and the birth stone version followed suit, with a quite a large margin between the two and the third place entry. VIXX is showing that they are stronger than ever with impressive album sales.

They’re doing quite well on digital music charts as well. VIXX’s mini album was released at 6 p.m. KST on May 15, and immediately ranked high on various real-time digital music charts. The new project has been met with praise, with many saying that VIXX has excelled at creating something new and exciting, as expected from a group that is known for their unique concepts.

This is VIXX’s first time taking on an East Asian fantasy concept, and they’ve succeeded in creating a mystical and fantastical feel with their song and music video. The lyrics are written entirely in Korean and read like poetry, and the clear and sensual melody meshes well with a gayageum (Korean traditional string instrument) to perfectly reflect the beauty of an East Asian fantasy.

Congratulations to VIXX on the achievement! Have you heard their new mini album yet?