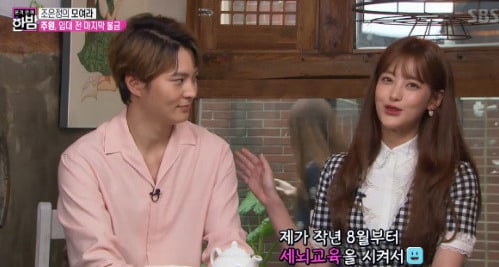 This unique ratings promise is so fitting given the circumstances!

On its May 16 broadcast, SBS’s “Night of Real Entertainment” aired an interview conducted with Joo Won, one of the main stars of the upcoming historical-fusion drama “My Sassy Girl.”

While he was talking about how Oh Yeon Seo was the drama partner who matched best with him, the actress herself made a surprise appearance.

During the rest of the interview, she revealed a rather special ratings promise the cast had in mind. “If we surpass 20 percent in viewership ratings, we will go see his military unit. We will make a surprise visit and buy Joo Won delicious food as well,” she explained.

As “My Sassy Girl” is 100 percent pre-produced, Joo Won had wrapped up filming before enlisting in the army on May 16 to fulfill his mandatory service. This unique and meaningful ratings promise would definitely be a nice event for actors and fans alike.

Meanwhile, drama “My Sassy Girl,” which was based on the movie of the same name, will finally make its premiere on May 29.