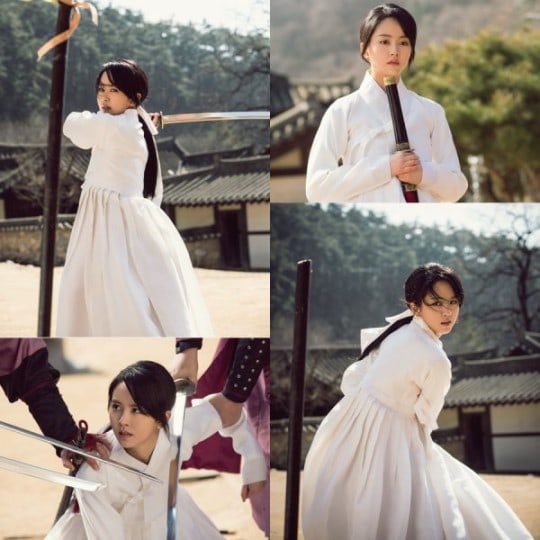 Danger Lies Ahead For Kim So Hyun In “Ruler: Master Of The Mask”

It looks like a darker side of Kim So Hyun’s character in “Ruler: Master of the Mask” will be revealed in the drama’s next episode.

Kim So Hyun plays the role of Han Ga Eun, a kindhearted and bright woman. However, in the new preview stills, she is showing a side of her that’s 180 degrees different from what viewers have been seeing until now. She has a serious and determined expression on her face while holding a sword in her hands. In one photo, she is held down by force and has a number of swords at her neck, causing viewers to wonder what led up to such a life-threatening situation, and what will happen afterwards.

This scene was filmed on March 6 in Mungyeong, North Gyeongsang Province. It was Kim So Hyun’s first sword scene in the drama, and it was revealed that she worked hard with the martial arts team to master pulling the sword out and wielding it.

The production team explained, “Han Ga Eun will be shown in a new light through Kim So Hyun’s sword scene. This will mark the beginning of an unexpected suspense. Please watch today’s episode to find out what will happen to Kim So Hyun.”

Kim So Hyun
Ruler: Master of the Mask
How does this article make you feel?