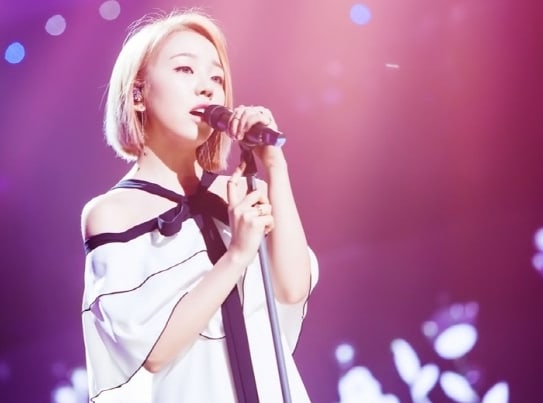 Baek A Yeon has shared a pretty teaser image for her upcoming new song, and revealed that her new track will be titled “Bittersweet” and feature the retro-inspired barbershop trio The Barberettes. We can look forward to its release on May 29 at 6 p.m. KST!

Baek A Yeon will be making a comeback in May.

Reports came out on May 17 from multiple sources in the industry that the singer is gearing up to release a new song. JYP Entertainment confirmed the news and said, “Baek A Yeon will be releasing a new song on May 29. We will be releasing more details in the near future.”

This will be her first solo song since “So So” one year ago, and approximately half a year since her duet with GOT7’s JB, a special seasonal song called “Just Once.”

Baek A Yeon will be going head-to-head with idol groups like Highlight, ASTRO, and APRIL, who are all releasing new songs on the same day. They are set to join a May roster that features other heavyweights like PSY, TWICE, iKON, SEVENTEEN, and SISTAR.

Are you excited for Baek A Yeon’s return?