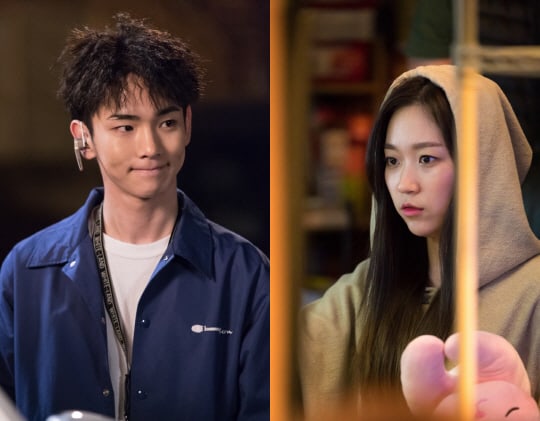 It sounds like drama lovers have plenty to look forward to from the upcoming MBC drama “Lookout,” including the chemistry between Kim Seul Gi and Key of SHINee!

The two popular young stars play two members of a team of vigilantes aiming to carry out justice in the action-thriller drama. Kim Seul Gi plays Seo Bo Mi, a woman who was transformed from a happy high school student into a recluse after being traumatized by a crime. She’s holed herself up in her tiny room and avoids social interaction as much as possible. Meanwhile, Key plays a quirky genius hacker named Gong Kyung Soo.

The pair only communicate via their phones and the Internet, and it’s said that they’ve never once meet in person. However, the bickering pair is a perfect fit, with Gong Kyung Soo hacking into CCTV systems and Seo Bo Mi monitoring footage in her room.

On May 17, the production team of “Lookout” shared stills of Key and Kim Seul Gi from the drama, giving us a new look at the pair. The drama also previously shared posters of each of its main characters, as well as stills of Key filming.

A representative from “Lookout” has said, “The pairing of Kim Seul Gi and Key is more than anyone could imagine. We expect that the witty duo’s collaboration and their unique ‘virtual’ chemistry will give a boost of fun and energy to the drama.”

“‘Lookout’ couldn’t exist without them,” the representative went on to state. “Please look forward to Key and Kim Seul Gi’s impactful roles as the perfect partners.”