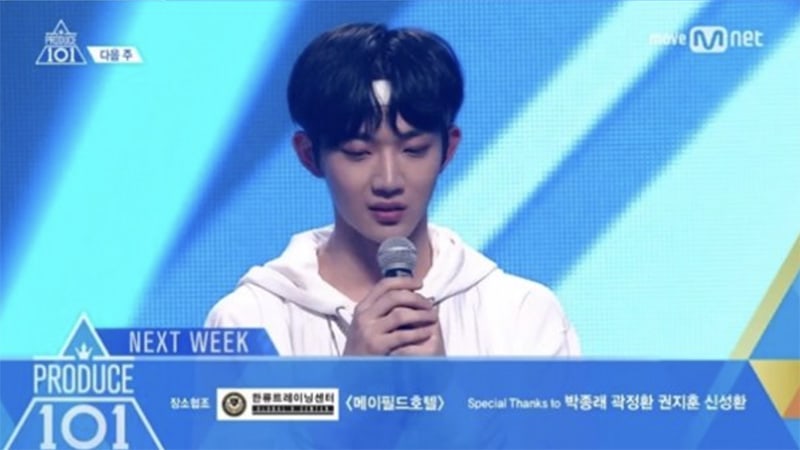 Mnet is under fire after cutting out the apology of contestant Ahn Hyeong Seop in the latest episode of “Produce 101 Season 2,” possibly misrepresenting events as it happened.

Before BoA announced the rankings, fifth place Ahn Hyeong Seop whined that his rank must have dropped from the previous week. As he expected, Ahn Hyeog Seop came in as sixth place, a level lower than his previous result. Ahn Hyeong Seop continued to complain after sitting next to eliminated contestant Choi Seung Hyuk, who consoled Ahn Hyeong Seop despite his own troubles.

After the episode aired, viewers condemned Ahn Hyeong Seop for his lack of consideration. The following week, Ahn Hyeong Seop’s rank showed a significant drop from sixth place to 20th.

In a teaser clip released on May 12, Mnet had included a preview of Ahn Hyeong Seop most likely apologizing for his attitude, saying, “I was very immature and immodest.” However, this clip was no where to be found in the actual episode, let alone anything close to an apology.

Mnet has been notorious for its “devil’s editing” in survival programs, which can make or break results for the contestants. The fact that Ahn Hyeong Seop’s sincere apology was completely cut out from the show could severely hurt his chances in the next round.

Netizens and fans have criticized Mnet for “devil’s editing” in the past, but Mnet’s way of editing continues to persist over the years. Whether or not Ahn Hyeong Seop can recover from his mistake and stay in the game remains to be seen.

The eighth episode and second elimination of “Produce 101 Season 2” will air on May 26.

Produce 101 Season 2
Ahn Hyeong Seop
How does this article make you feel?