H.O.T. fan community, DC H.O.T. Gallery, announced that they will not be supporting member Moon Hee Jun as of May 20. They listed various reasons for this action, including him allegedly lying about his wife’s premarital pregnancy.

Below is their official statement.

“Moon Hee Jun of H.O.T. faced criticism from the public after beginning his solo activities with rock music, but he made it through those hard times with the help of his fans. However, when he was discharged from the army and his reputation with the public recovered, Moon Hee Jun discarded his humble stance and began to show inappropriate attitudes and words. Last year, he made various problematic statements regarding his concert and marriage, as well as the return [of H.O.T.]. We fans have waited for an earnest explanation and apology, but what we got was a deceptive letter filled with excuses, no response about the issue with concert goods, and continuous disrespect for the [H.O.T.] members. We believe these actions will harm fans’ memories with the group, the group’s reputation, and other H.O.T. members’ images, and therefore declare withdrawal of support.

“Ahead of the declaration, we will clarify that Moon Hee Jun’s agency, Koen Stars, only oversees his activities in variety shows. They are not involved in any of his promotions as a singer or in the management of his fan club. Anything related to his concerts, goods, and fan club are managed by Moon Hee Jun and fan club officials. We are not withdrawing support because of his marriage.

“1. His attitude towards fans

“2. Deceiving fans with an undeniable lie

“4. Disrespecting members and imprudent statements about the group reuniting

“Moon Hee Jun and his fan club officials have neither offered a sincere explanation nor shown willingness to improve in the issues listed above. The members of DC H.O.T. Gallery have supported all five members of H.O.T., but as of today, we will withdraw support for Moon Hee Jun and support only four members, Jang Woo Hyuk, Tony Ahn, Kangta, and Lee Jae Won. We will boycott all of Moon Hee Jun’s future activities.” 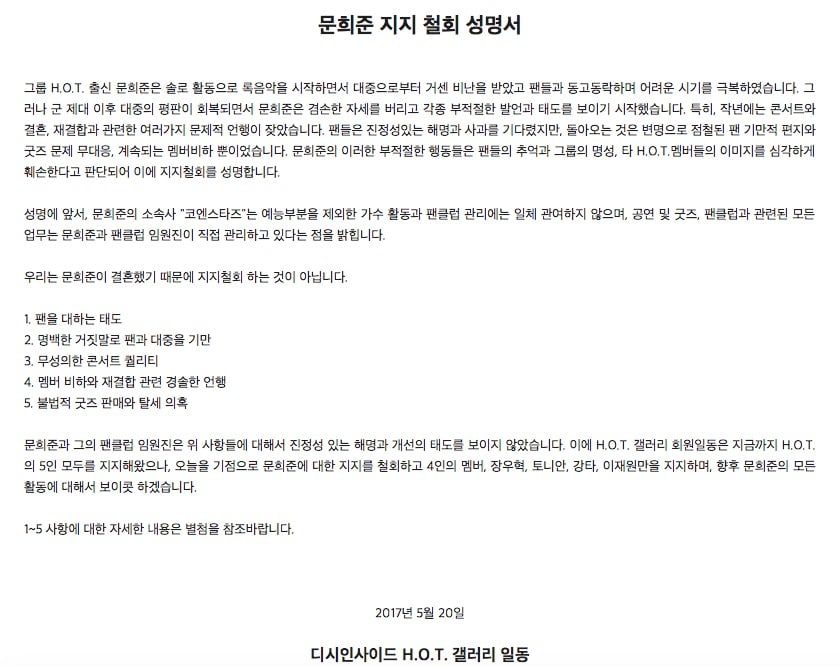 While DC H.O.T. Gallery is not the only H.O.T. and Moon Hee Jun fan community, this movement is worth noting because this is the second time that a fan community has declared boycott of a specific celebrity’s activities, with the only other time being DC JYJ Gallery’s withdrawal of support for Park Yoochun.

Moon Hee Jun
H.O.T.
How does this article make you feel?