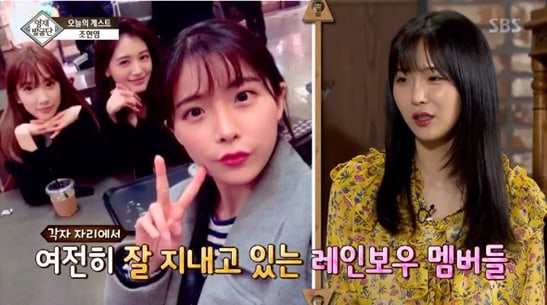 It’s always nice to see group members continue to be close, even after their contracts end and subsequently disband.

During an appearance on SBS’s “Einstein” (tentative title), former Rainbow member Hyunyoung made an appearance and discussed various topics like how she now holds a certification for yoga.

Jung Chan Woo and Kim Tae Gyun, more commonly known as “Cultwo” due to their radio program, commented, “Rainbow may not be together anymore, but we are always grateful towards them because they appeared on our show a lot.” The seven-membered group amicably disbanded back in November 2016.

They then asked Hyunyoung how the other members were doing these days. She simply replied, “All the members are now going on their own paths, and are all doing well.”

Hyunyoung previously explained how the members are still close to this day, and that she sees their situation as a “temporary separation” rather than a disbandment.

Hopefully we will see get the chance to see a Rainbow reunion in the future!

Hyunyoung
Rainbow
How does this article make you feel?