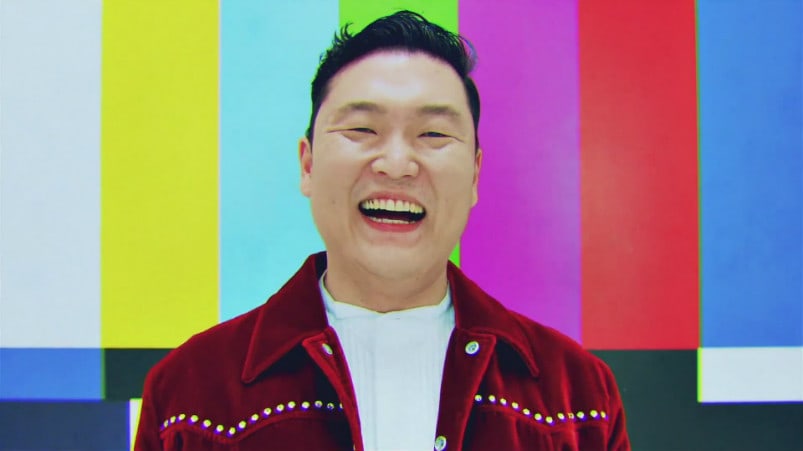 PSY’s “I LUV IT” is the new No. 1 song this week! Five years ago, “Gangnam Style” took the world by storm, so it’s no surprise that the title songs of his new album have immediately become chart topping hits. “I LUV IT” won on “Inkigayo” and on “M!Countdown” last week, and is also ranked high on all chart sources. Congratulations to PSY!

“I LUV IT” is one of two title songs from PSY’s eighth album “4×2=8.” PSY is teaming up with Block B’s Zico for the first time in composing this song. It’s a delightful electronic house style song, and the lyrics also show PSY’s sensitive characteristic as well as an exciting hook.

PSY edged out his YG Entertainment label mate WINNER for the top spot this week. WINNER’s three-week champion “REALLY REALLY” dropped one spot to No. 2. Holding steady at No. 3 is another former chart topping song, IU’s “Palette.”

There are two new songs in the top 10 this week. Besides the No. 1 song “I LUV IT,” PSY’s other title song “NEW FACE” also moves up seven spots to No. 7. This song reminded us of “Gangnam Style” with its impressive rap flow and addictive chorus. The funny music video features Apink’s Son Naeun and also contains hilarious choreography and lyrics.

Moving up 13 spots to No. 8 is Han Dong Geun’s “Crazy.” After enjoying a breakout year in 2016 with his old song “Making A New Ending For This Story,” Han Dong Geun recently dropped his first studio album “Your Diary.” The title song “Crazy” is a synth pop ballad with pleasant melody, and the heartfelt lyrics describe a sense of longing and nostalgia. Han Dong Geun’s genuine vocals bring out the best of this song.

Singles Music Chart - May 2017, Week 4
Don’t miss our music chart in the K-pop fan magazine THE KRAZE! Check them out here.