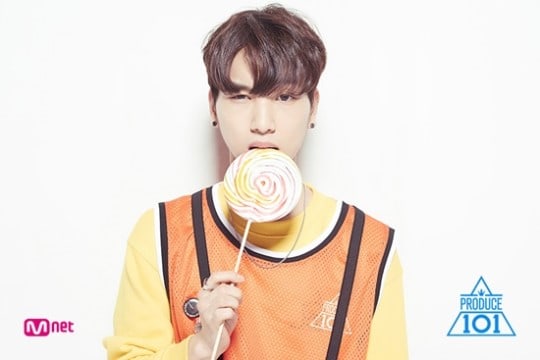 Recently a Korean media outlet held an interview with Joo Won Tak, a former “Produce 101 Season 2” contestant who was eliminated in the first round.

Joo Won Tak, from 2ABLE Company, was ranked No. 92 at first and rose to No. 62 before being unfortunately eliminated from the Top 60.

“Of course I feel regretful,” he said. “It’s not that I couldn’t make it to the Top 11, but I’m more regretful that I wasn’t able to show people my vocals through the position evaluations.”

Although his one-shot video during the “Mansae” performance was well-received by viewers, he did not receive much broadcast time on the show. “Maybe there would have been more potential if the ‘Mansae’ video had come earlier,” he said. “Although I didn’t appear much on the show, my rank went up a lot in a few days so I was happy. I had no expectations but suddenly I was in the 60s. I got my hopes up but didn’t make it in the end.”

Joo Won Tak’s parents had personally made a banner to support their son on the show. “My heart hurt [seeing that],” he said. “I thought I have to work harder, but right after that was the third week of broadcast. My rank had dropped [from 83] to 94. I was watching it with my parents and they were disappointed. It was really hard to see my family so sad.”

He said in a message to his family, “I wish you won’t be sad for me. You may think that you aren’t able to push me forward, but I am always grateful for your support. There is no need to feel sorry towards me at all.”

When talking about the trainee life, Joo Won Tak said, “I was okay with not having a cell phone, and they gave us enough to eat so I wasn’t worried about that. But it was really hard not being able to sleep. Since it was a competition, the trainees would often give up sleep for more practice.”

However, he also had good things to say about the program. “I think I gained the confidence to work the hardest at whatever I do,” he said. “We only have two or three days to prepare for a performance. I think that as I prepare for things like debuts and concerts, this kind of experience will be a lot of help. I’m also happy that I’ve gained some fans along the way.”

Meanwhile, “Produce 101 Season 2” recently held their second round of eliminations for the Top 35.

Produce 101 Season 2
Joo Won Tak
How does this article make you feel?