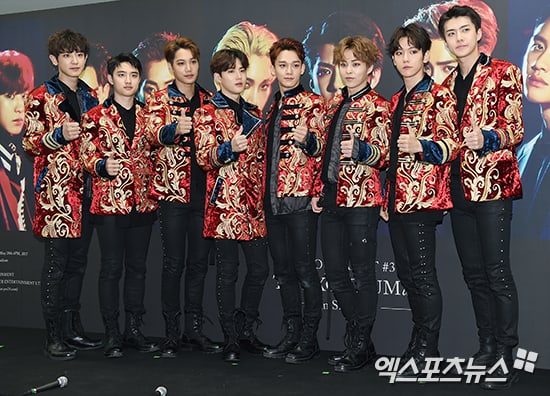 18 cities and 37 concerts later, EXO’s third concert tour “The EXOr’DIUM” is coming to an end with an encore that will be cemented in history.

The first encore concert was held on May 27 at Seoul Olympic Stadium (more commonly referred to as Jamsil Stadium), and continued with another concert on May 28. Ahead of the second concert, EXO sat down for a brief press conference where they discussed their hopes and aspirations. Lay was unfortunately not in attendance due to conflicts.

See Also: EXO Shares How They Feel About Ending Their Tour On A High At The Jamshil Stadium

Having recently celebrated their fifth debut anniversary, EXO reflected, “It’s thanks to our members’ teamwork. We’ve become more unified, and we have even more expectations for the future. If we were supported by our genuineness and passion until now, we will promote with unity and a veteran-like stance moving forward.”

Chen shared, “Five years has passed by, and we’re so thankful to our fans. We will become a more strengthened EXO, and passionately carry out our promotions.”

On the topic of promotions, it has been almost a year since the group officially promoted on music programs. While their last release was their special winter album “For Life,” it was meant to be a gift for the fans with proceeds going to charity, and was not promoted officially.

As expected, many are therefore looking forward to EXO’s upcoming comeback. Baekhyun revealed, “Our title track has already been decided. It is a track that all the members and the agency is satisfied with, so we have a lot of expectations. We will be returning this summer.”

“‘Ah, it’s hot’ is the spoiler,” he added. The members had briefly mentioned this on the first day of this encore concert as well, and speculating fans suggested he could also be saying, “The War” is the spoiler given how Baekhyun also kept teasing with phrases like, “Do you want to fight? Do you want to see blood?” (The phrase “ah, it’s hot” in Korean sounds somewhat similar to what “the war” sounds like pronounced phonetically with Korean syllables.)

With countless of records and groundbreaking awards under their belt, EXO had even bigger and more meaningful dreams they want to achieve in the future.

“Our goal for this year is to win daesang (grand prize) for the fifth year in a row again at the end-of-the-year ceremonies,” revealed leader Suho. The group previously rewrote history in 2016 as the first ever group to win the coveted title four consecutive years at several award shows.

As for the future, the group expressed, “However, more importantly, we want to perform onstage for a really, really long time with all the members in good health. We want to become singers who are an example to our juniors.”

Meanwhile, EXO will finish out their final history-making encore concert on May 28.