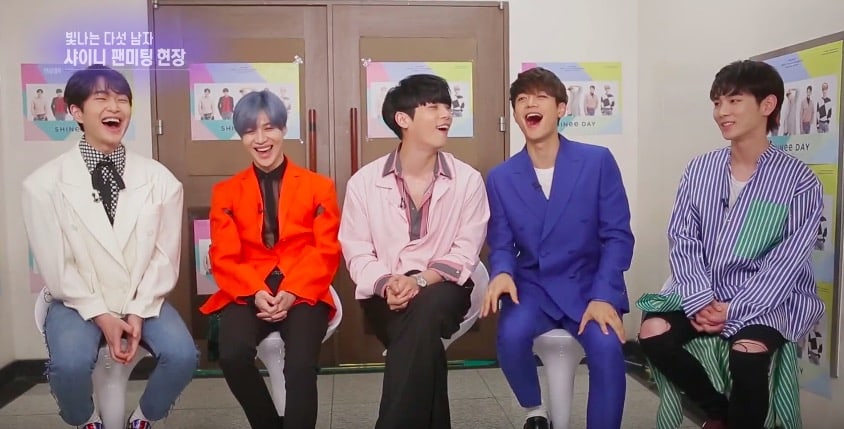 On the May 27 broadcast of “Entertainment Weekly,” the SHINee members sat down for a funny and candid talk.

During the interview, the reporter complimented Key, saying, “You are known as this industry’s fashionista.” She then asked about the clothes he was wearing for the interview, and Key replied, “For everything I wear, I discuss it together with the stylists.”

That response seemed to startle Onew, who said, “Has it always been like that?” Hilariously, Onew seems to not be as involved in his clothing choices, as he jokingly complained about the outfit he was wearing.

Key then poked fun at Onew’s sense of fashion (or lack thereof) by saying, “Onew thinks that anything that fits him well is good, and anything that doesn’t, is bad.” However, the members teased back that Key’s fashion hadn’t always been good, considering what he wore during his debut years.

Afterwards, the members chose Onew as the person who makes the best counselor. Taemin explained cheerfully, “He’s a really good listener and he offers advice from his own experience. But the best part is that he doesn’t remember anything afterwards.”

Meanwhile, SHINee recently celebrated an impressive nine years together since their debut in 2008, and is currently working hard with their individual activities.

SHINee
Entertainment Weekly
Key
Onew
How does this article make you feel?