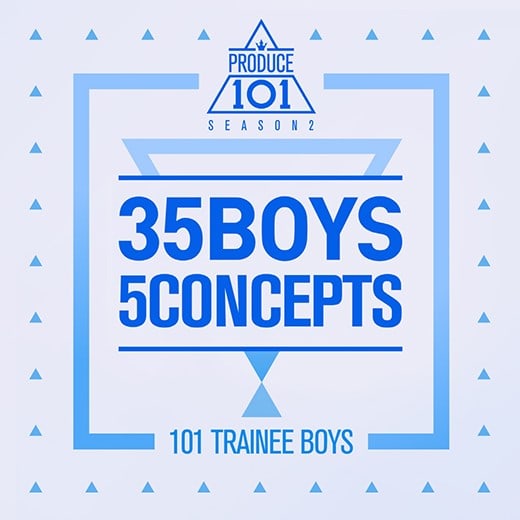 On the June 2 episode of “Produce 101 Season 2,” the remaining 35 trainees were reorganized into groups to perform original songs for the concept challenge.

Although the groups, chosen by online votes, were decided last episode, the elimination of 25 trainees meant that everyone had to be rearranged into groups of seven. Groups with too many members had to vote on who would leave the group, while groups with not enough members voted on who they would choose (out of those who had been removed from their previous group).

BoA announced before the reorganization that the winning team, decided by the live audience of 2,000 people, would receive 220,000 votes as a benefit. However, the votes would not be distributed evenly – instead, the trainee with the most votes in their team would get a larger fraction of the total benefit votes. In addition, the winning team would get a chance to perform on Mnet’s official music show, “M!Countdown.”

The winning group of the night was “Knock” with “Open Up.” Group members Kang Dong Ho and Kang Daniel had the most votes within their group, but it was announced that the final winner between the two of them would be revealed during the next vote rankings. The winner will receive 100,000 votes while the remaining trainees in “Knock” will receive 20,000 votes from the 220,000 benefit vote total.

The individual rankings, based on live voting during the concept challenge only, were as follows:

Instead of revealing the current rankings for all trainees at the end of the episode, only the 12th place trainee’s name was revealed. Currently in 12th place is Pledis Entertainment’s Hwang Min Hyun.

Meanwhile, “Produce 101 Season 2” has not yet confirmed when it will be filming their final ranking votes this week but has announced the final broadcast date.

Edit: This article has been updated to include the individual rankings for all trainees, based on live voting at the concept challenge only. In addition, the number of benefit votes has been corrected.