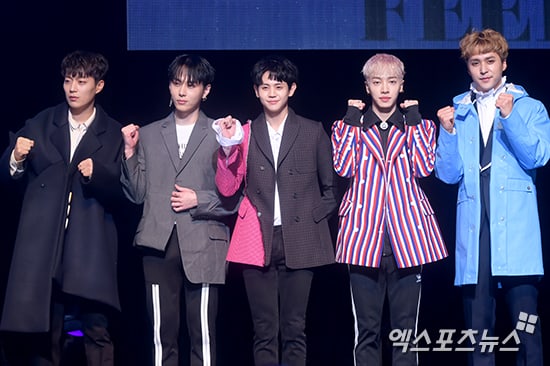 On June 3, Highlight held a press conference for their first concert “Can You Feel It?” and opened up about how much the concerts mean to them.

Yang Yoseob added, “We like to joke with each other and say that this is our first concert as a rookie group, but it’s quite incredible to be in the same venue as our very first concert. We tried to prepare as many songs as possible that have all five of us on stage at the same time, rather than solo songs or unit performances, because we wanted to go back to our roots. We’re so happy to see so many fans here.”

With the topic of BEAST being discussed, the members were asked if they feel pressured to do better as Highlight than BEAST ever did.

Saying that they haven’t changed much compared to when they were members of BEAST, Son Dong Woon said, “We’ve stuck to our roots since we made our debut as BEAST, and since becoming Highlight, we’ve continued to look forward and keep running. We will do our best to be a Highlight that can overcome BEAST.”

Yoon Doo Joon also added, “It’s true that we do feel a bit of pressure about having to do better than BEAST, but we also know that it’s impossible to recreate the legacy of BEAST in a short amount of time. We plan to keep moving forward, one step at a time with our company and our fans.”

Highlight will be holding the Seoul leg of their “Can You Feel It?” concert from June 2 to June 4. The group is set to embark on an overseas tour in July, starting in Hong Kong on July 29, and moving on to other locations like Japan and Taiwan.

BEAST
Highlight
XPN
How does this article make you feel?