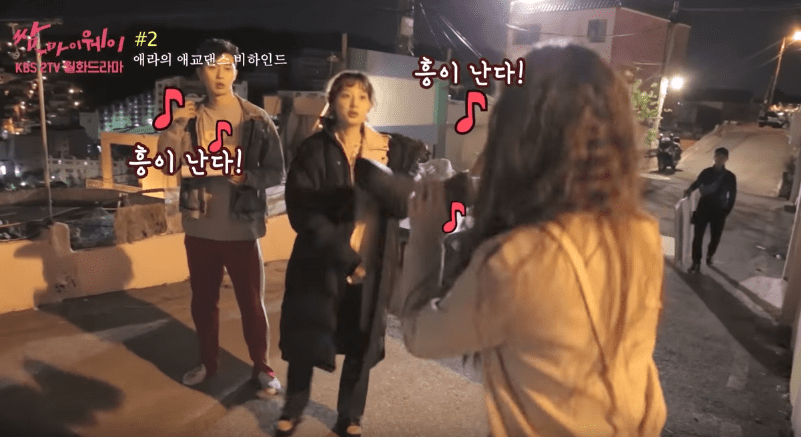 The only thing more adorable than Kim Ji Won’s dancing in KBS2’s “Fight My Way” is her trying to practice those moves behind the scenes!

The production team recently released a new making video on June 2 that explored how Kim Ji Won brings the cute aspect of her character to life.

The first behind-the-scenes look revealed how Park Seo Joon and Kim Ji Won carefully positioned themselves movement by movement. As the pair wrapped up checking camera angles for one scene, Kim Ji Won’s cuteness continued even when she broke out of character, as she asked the staff if there were late night snacks.

Actress Song Ha Yoon—who plays Baek Seol Hee—joined them for the next scene, where Kim Ji Won broke out into dance when she saw her friend carrying a plastic bag of spicy rice cakes.

As the scene rehearsal went on, Park Seo Joon made the staff laugh as he muttered the lines, “I think you guys need to get doping tests done.” The girls response was to dance even more energetically, while chanting “doping test” instead.

Kim Ji Won shyly explained that there wasn’t exactly a set dance or anything, but that she and Song Ha Yoon just fed off each other’s energy and moved around. “I’m not really good at dancing, but since Seol Hee (Song Ha Yoon) is dancing with me, I can be a little less embarrassed while filming,” she revealed.

Endlessly amused by their dance moves, Park Seo Joon commented after their rehearsal, “I think you have to see them dancing from the back. Wow, really, they’re…,” as he shook his head at a loss for words.

Check out everything play out below!