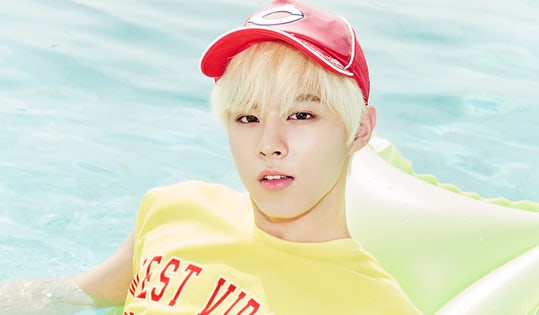 UP10TION’s agency TOP Media has announced that member Wooshin will be taking a break for health reasons.

The agency wrote in a statement on June 6:

“Hello. This is TOP Media.

“It has been decided that UP10TION’s Wooshin will be taking a rest from activities for the time being to take time to recharge, due to health issues.

“First of all, we apologize for conveying this sudden news to the fans who love UP10TION and Wooshin.

“Wooshin’s psychological condition has become very poor due to mental stress since the end of last year. After consultation with Wooshin and his fellow members, it was judged that Wooshin is is need of a break for a period of time in order to recover, and it was decided that he will be taking time to recharge for a while.

“We apologize once again to fans for causing concern, and we ask that you encourage and support Wooshin and UP10TION.

“Nine UP10TION members are currently preparing to release a new album at the end of June, and we will update fans again in the future about their comeback and future activities.

Wooshin sadly became the target of baseless criticism last year when some viewers said that he appeared to place his hand on his “The Show” co-host Jeon Somi’s chest area during a video released at Christmas (despite a statement from the show that confirmed this was not the case).

TOP Media stated in January that they intended to take legal action against those who spread false rumors about Wooshin.

We hope that Wooshin takes all the rest he needs to recover.

Thanks to Zhiyen for the tip.