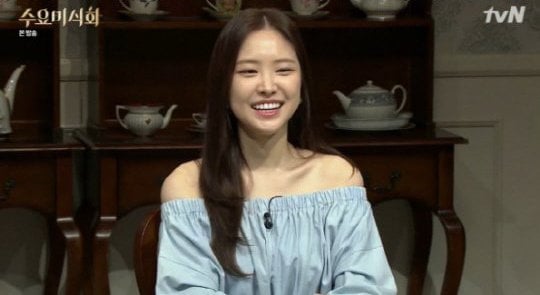 During a guest appearance on tvN’s “Wednesday Food Talk,” Apink’s Son Naeun showed off her knowledge as a lover of food as the cast and guests discussed various places that specialize in bread.

When the MCs asked about Apink’s reputation for being voracious eaters, Son Naeun confirmed that the members loved to eat, and how their meals don’t shy away from including things like blood sausage soup (sundaeguk), fish roe soup (altang), chicken feet, hangover stew, pig’s feet, amongst many other dishes.

The MCs then followed up by questioning, “Do you guys pair it with alcohol?,” as many of the foods listed are common accompaniments that appear during a night of drinking.

However, Son Naeun explained, “We don’t really drink. We’re more focused on the food[, than the drinks].”

Have you tried any of the dishes listed above?

Apink
Wednesday Food Talk
Son Naeun
How does this article make you feel?