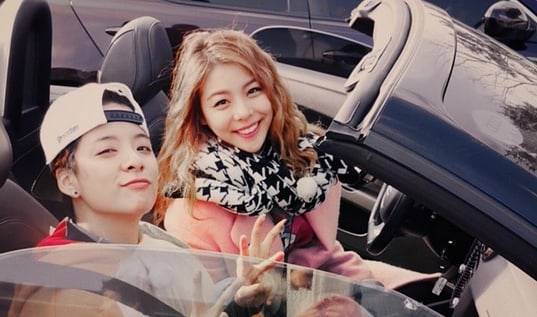 f(x)’s Amber and songstress Ailee are two best friends that we can’t get enough of!

On June 10, Amber broadcast a live show on Instagram to chat with her fans. However, Ailee had other plans, as she appeared in the comments to ask if Amber’s live video would end if she called her right then.

Amber begged Ailee (using her real name Amy) not to call her because she would “ruin everything,” but that seemed to be Ailee’s goal!

“Why do you guys want Amy to call me?!” Amber asked her fans, before taking a screenshot of Ailee’s comments. Amber soon after posted the screenshot on Twitter, which includes Ailee’s comment spam of, “IMMA CALL AND RUIN EVERYTHING.” Amber wrote in the caption, “Exposed.”

Ailee did end up calling in via FaceTime on their friend’s phone so she could take part in all the fun. She drove Amber crazy throughout the live show by screaming at her in the background, calling her a “butthole,” and just generally being a menace. Ailee happily yelled every once and a while, “I’m ruining your show!”

As Amber tried to give a shout out to all the fans all over the world who were sending in comments, Ailee screamed, “Amber is a robot! Don’t listen to her!”

We love these BFFs.

Ailee
Amber Liu
f(x)
How does this article make you feel?