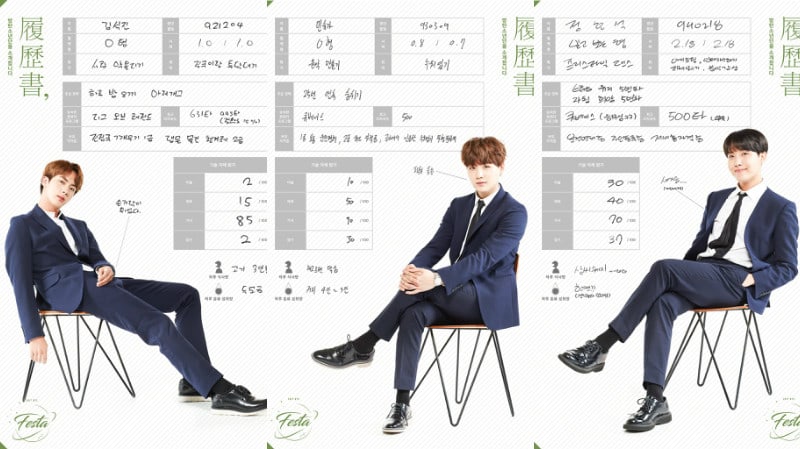 As part of their “2017 BTS Festa,” BTS has revealed in-depth résumés of each member!

In the first page, each member wrote their personal information, specialties, hobbies, experiences, computer programs they are good at, how fast they type, what certificates they have, how much they eat each day, and more.

Jin wrote that he has experience in eating eight meals a day and in cracking dad jokes. He’s best at using the computer program League of Legends, and he has a first-rate certificate in waking up Jungkook and a second-rate certificate in making sure Rap Monster has all of his things. 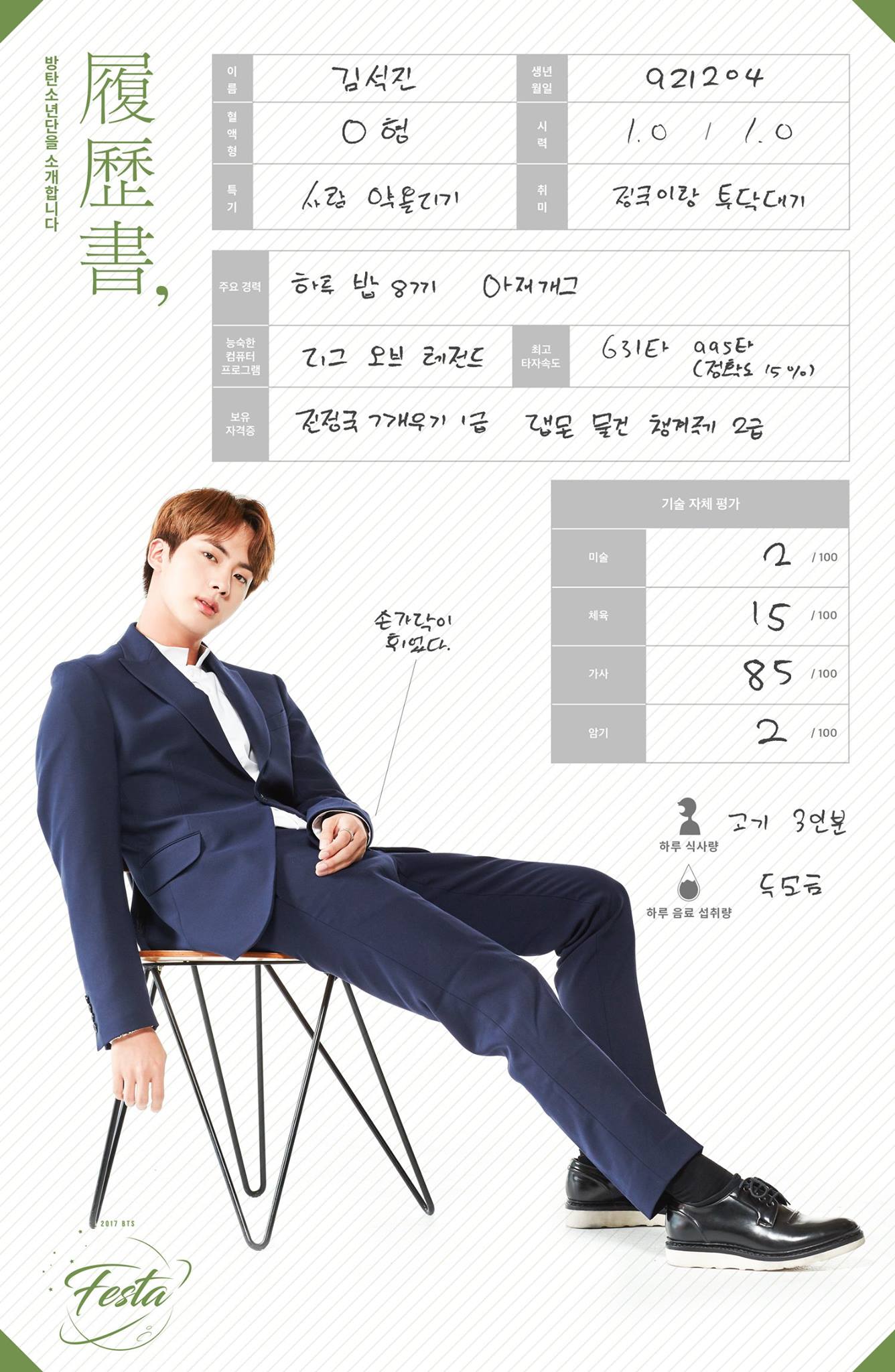 Suga has experience in breathing consecutively for 25 years, and he’s best at using the computer program Cubase. He pointed out that he has good skin. 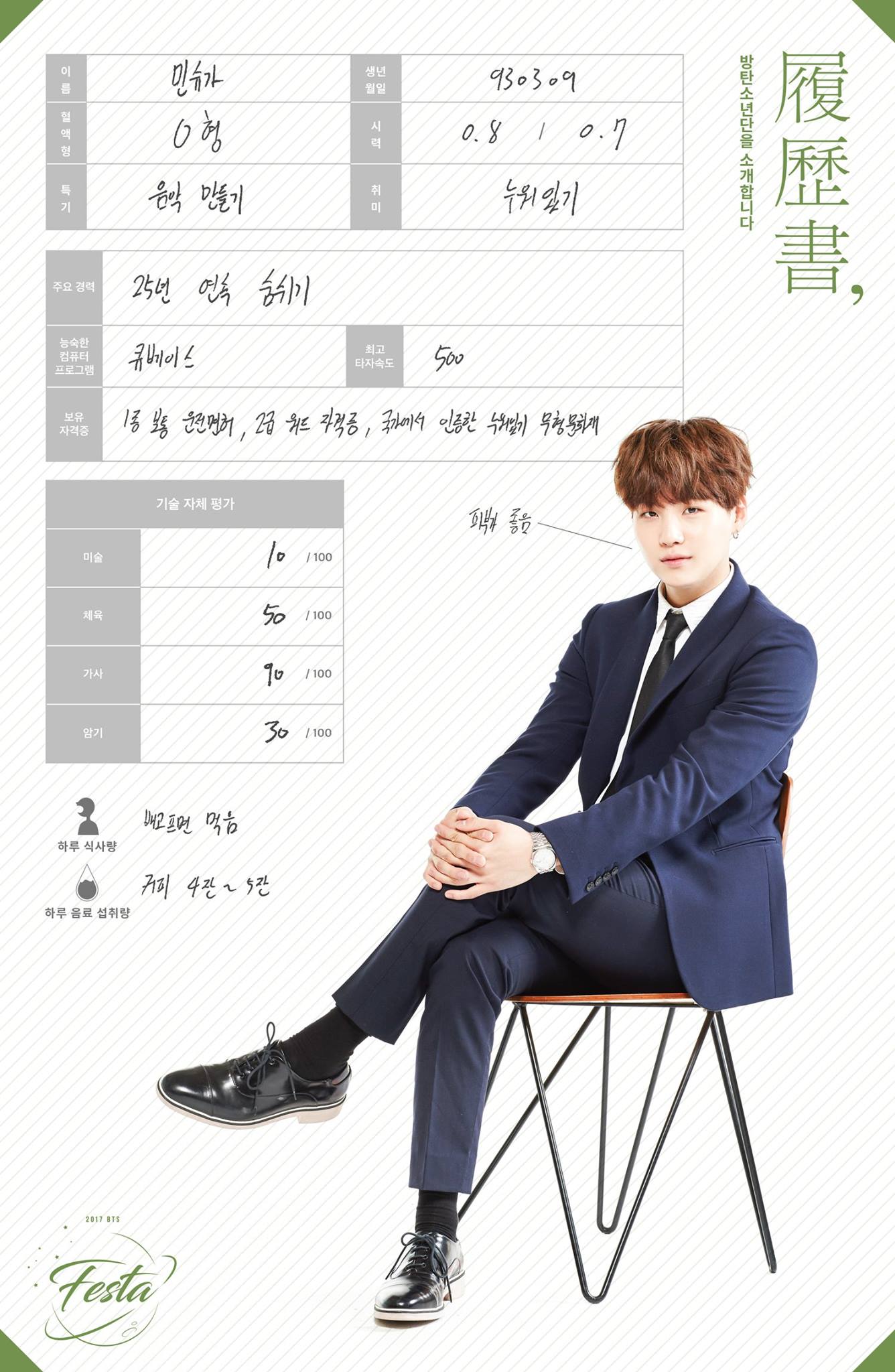 J-Hope has five years of experience in staying bright and calling himself “hope.” He has a driver’s license, ID, and a “J-Hope certificate.” 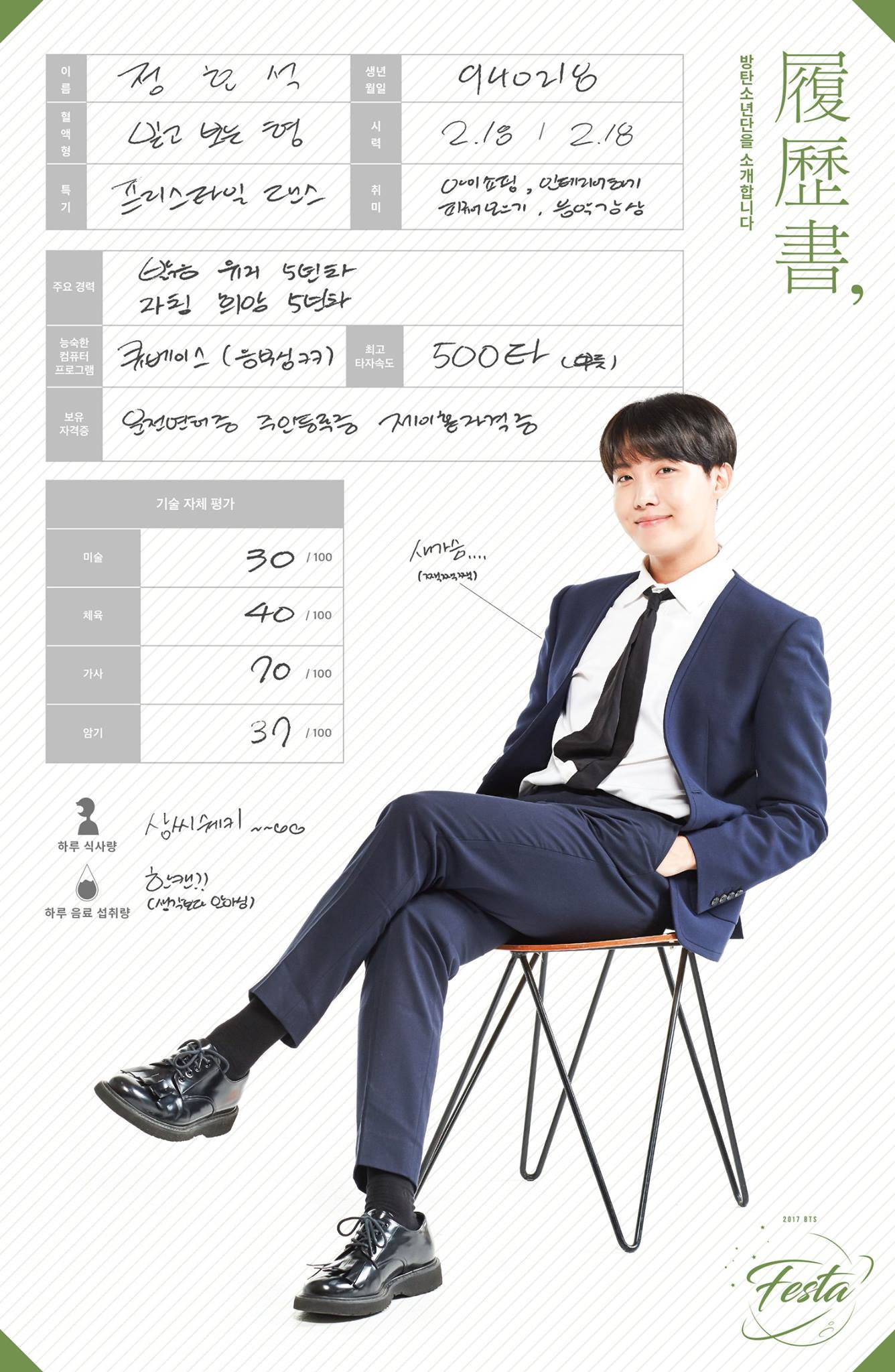 Rap Monster has experience in having the most impactful hairstyle during his debut, and he is able to use various computer programs like Microsoft Word, Power Point, Cubase, and more. He has a first-rate international sports dance certificate and a first-rate hotteok (Korean pancake) making certificate. 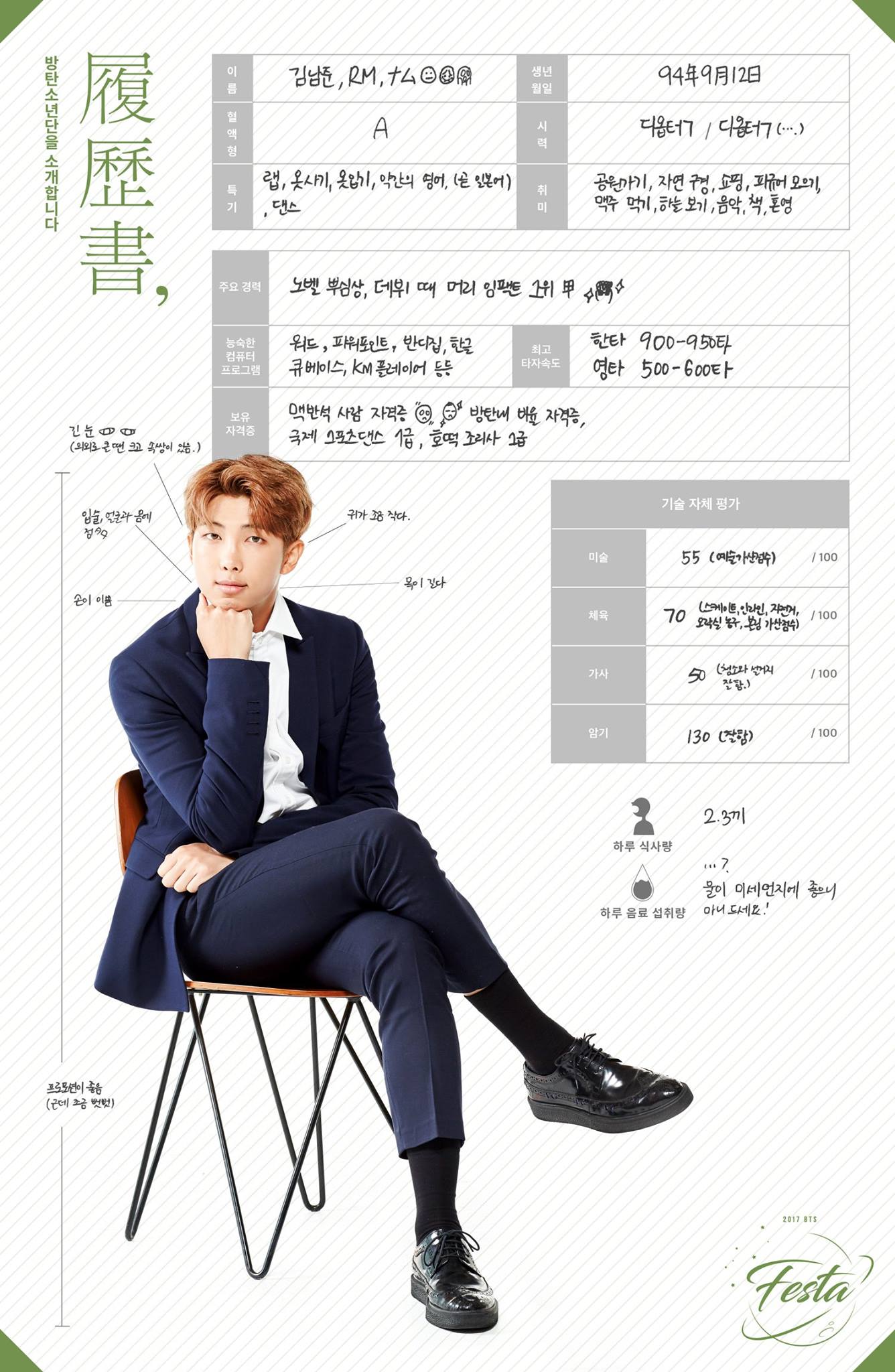 Jimin’s specialty and hobby is lazing around. He has experience in breathing consecutively for 23 years, and is good at the computer program Minesweeper. He has a first-rate certificate in riding on the other members’ backs. 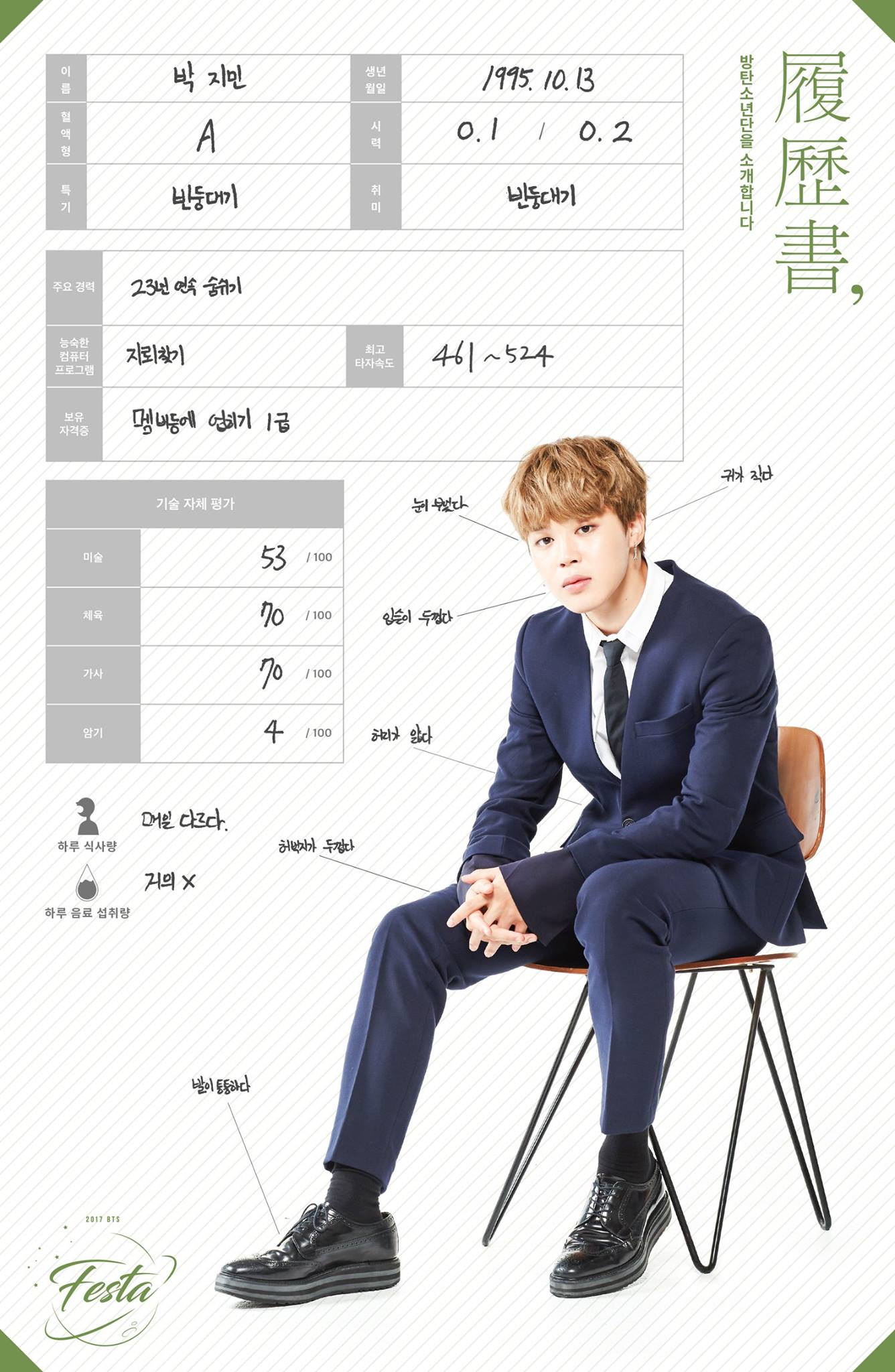 V has played 10 hours of games, and has succeeded in composing and writing over 10 songs. He’s best at the computer program Overwatch and only has a driver’s license. He pointed out the moles near his eye, nose, and mouth. 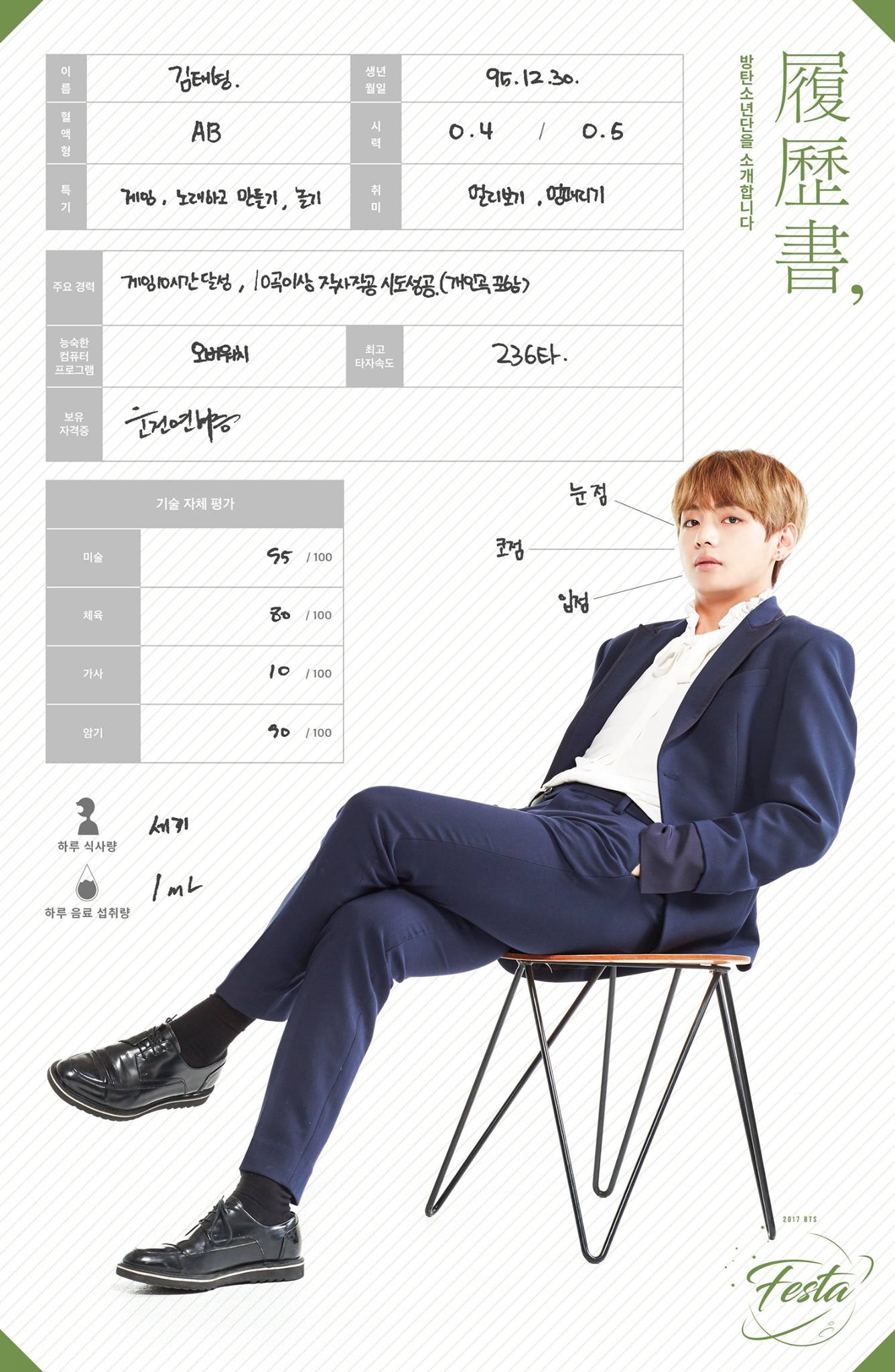 Jungkook has experience in taking second place in a physical fitness test during his elementary school days. He’s also good at Overwatch and only has a driver’s license. 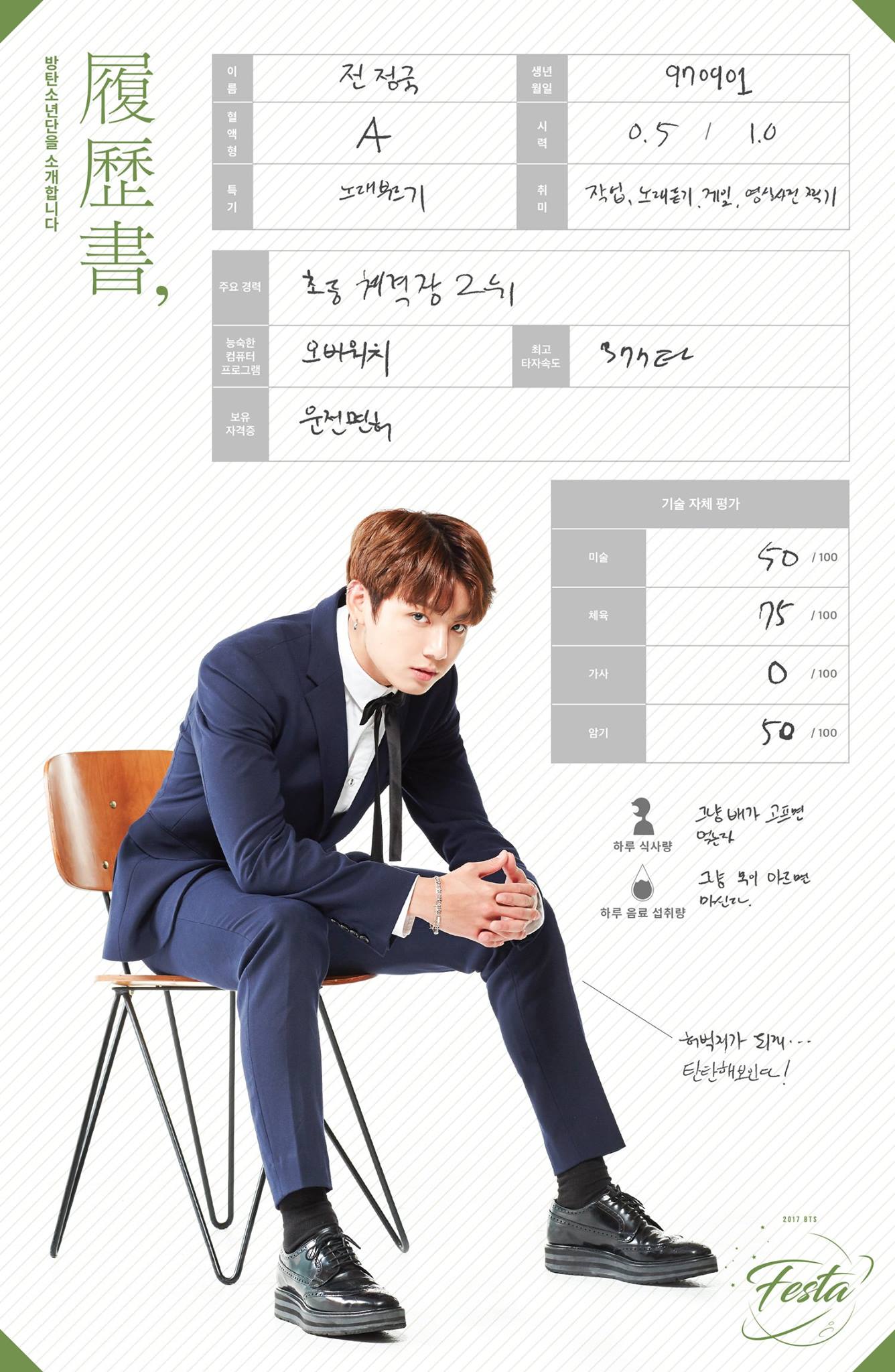 The second page explains their habits, words that describe them, people they respect, things they like, things they dislike, and more.

Jin’s habit is picking fights with people all the time. “Big Hero 6” is the movie that represents him because the character’s shoulders resemble his own. What he thinks about most these days is “cute, adorable, pretty, and beautiful ARMYs.” He likes snowboarding, bananas, wearing big clothing made of pure cotton, and BTS, while he dislikes cold weather. He was recently embarrassed when he discovered himself cracking dad jokes. 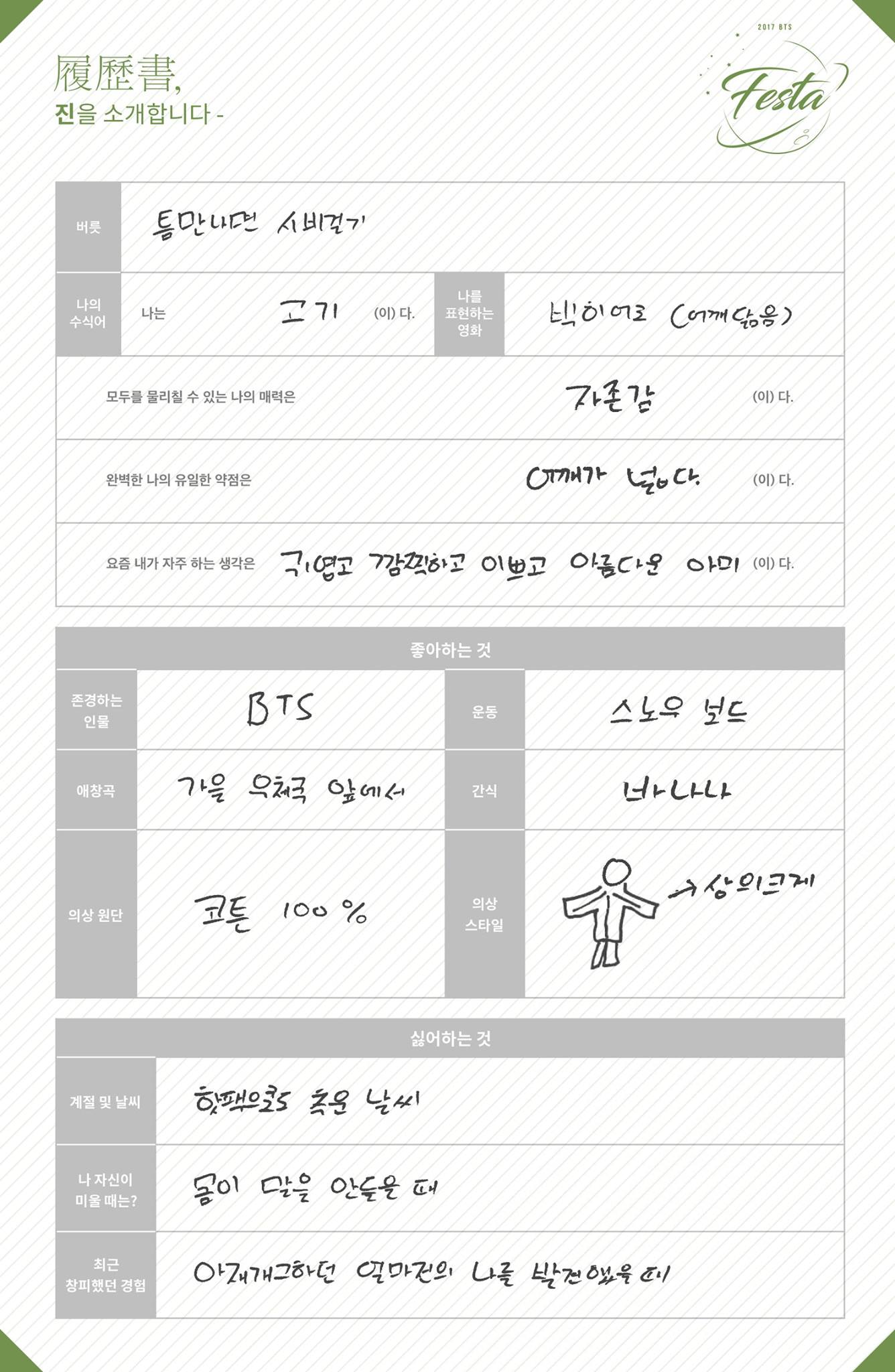 Suga’s habit is biting his nails. He calls himself a genius, and “Scarface” is the movie that describes him. He likes basketball, coffee, long-sleeved shirts, and respects his father. He also dislikes cold winters. 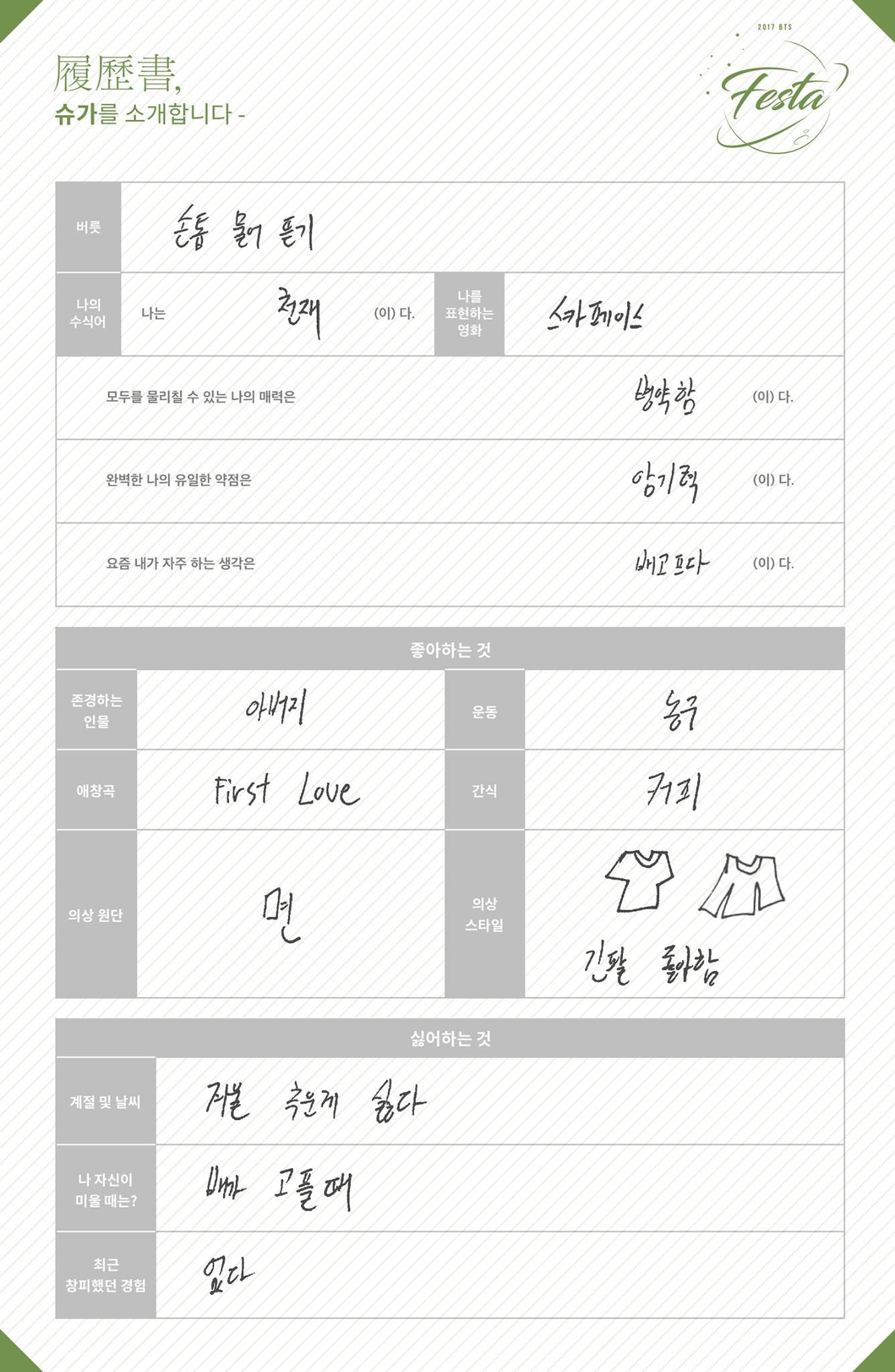 J-Hope’s habit is saying, “Eeyah~!!” and holding his hands together when hosting a show. “Inside Out” is the movie that describes him. His greatest charm is his dimples, and his only weakness is that he has no weaknesses. He likes tennis, sweet potato fries, clothes made of denim or leather, and respects Bang Shi Hyuk. He dislikes extremely hot weather, and he was recently embarrassed when he got his lyrics wrong. 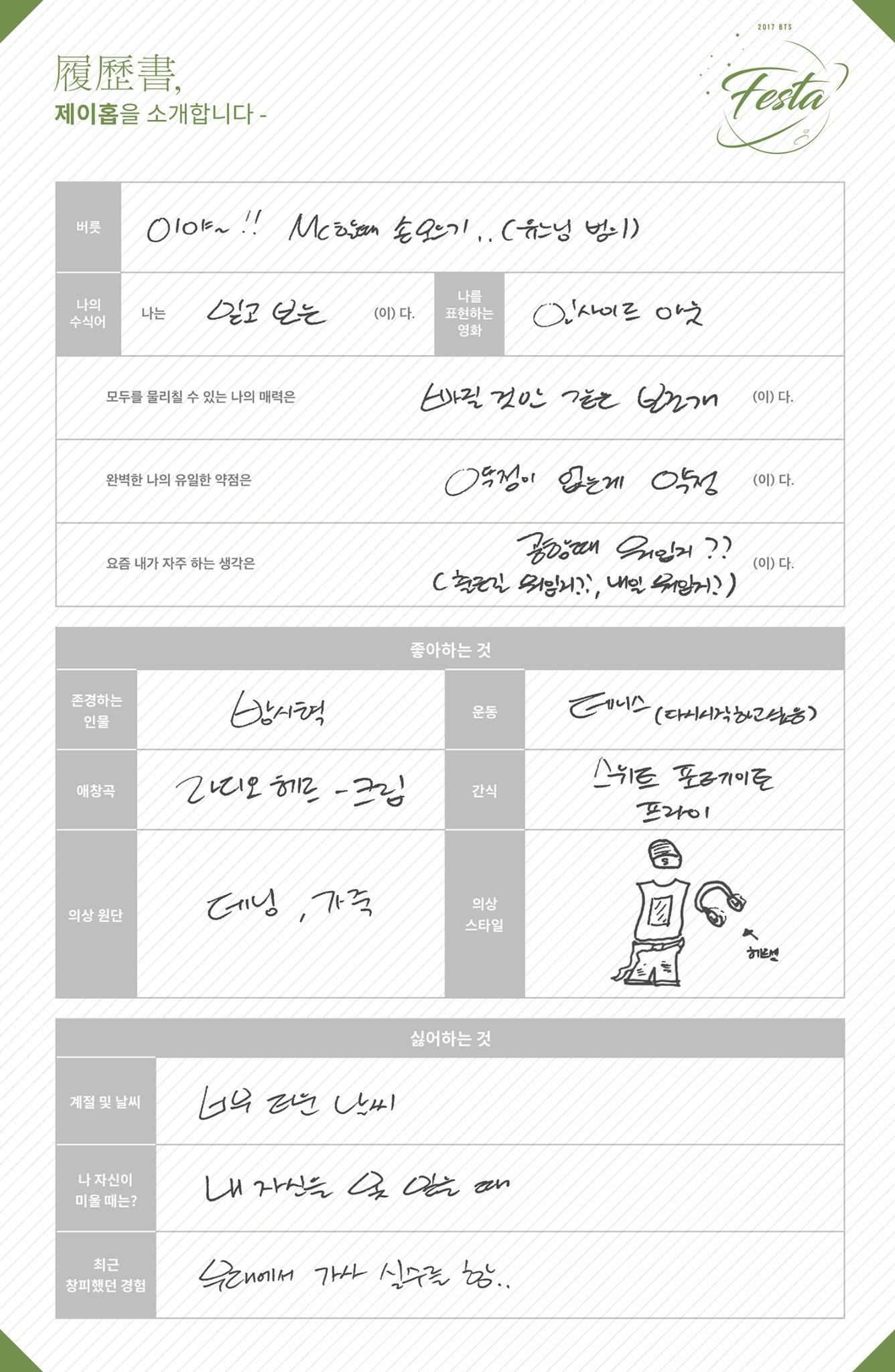 Rap Monster’s habit is saying anything he wants, moving his feet, and rolling his shoulders. He enjoys biking, skating, skiing, sweet snacks, and respects his parents, himself, and everyone he loves. He was recently embarrassed about his acting. 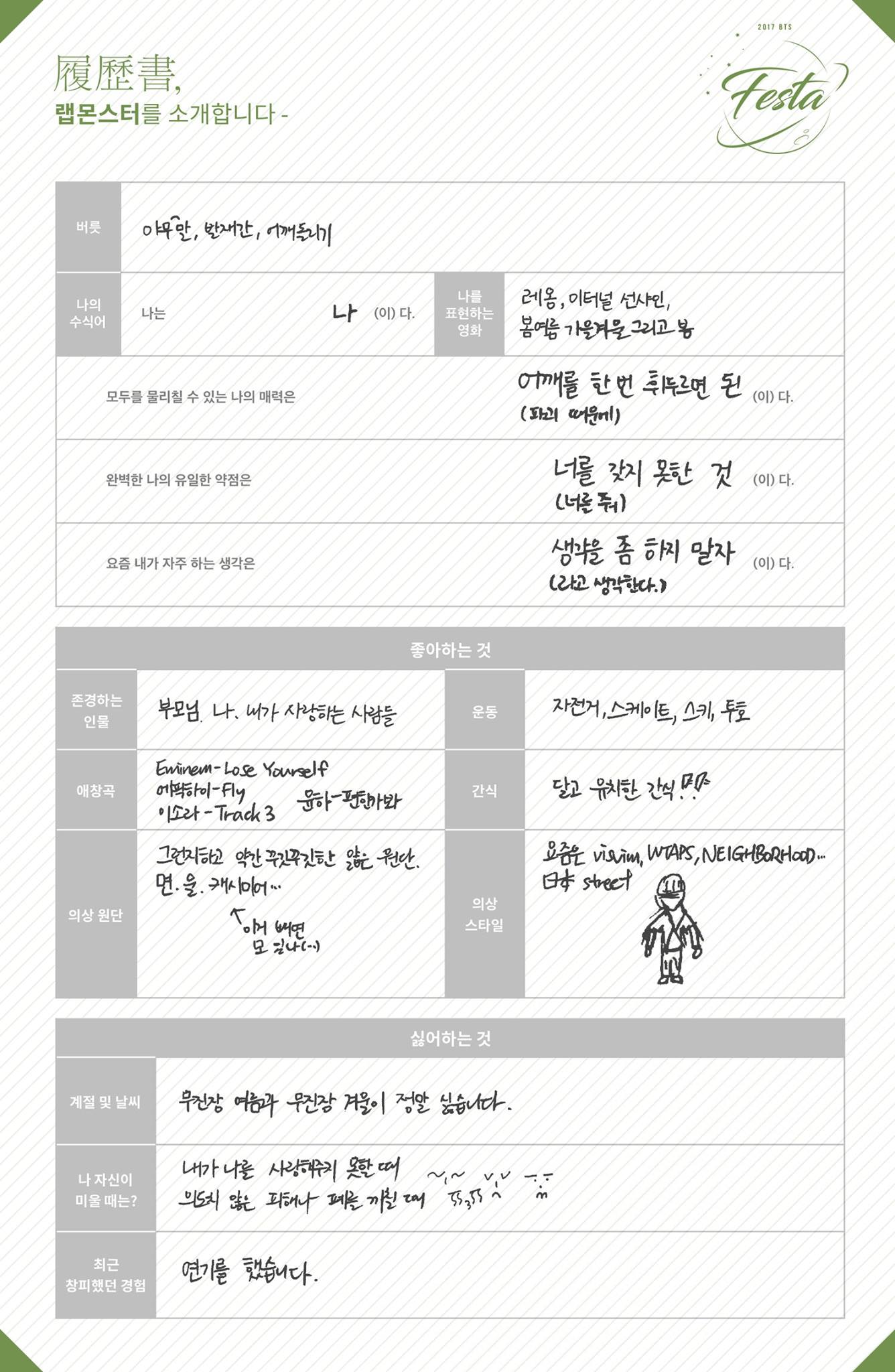 Jimin’s habits are biting his nails, scratching his neck while sleeping, and flipping his hair back. He enjoys sports that utilize balls like billiards, chips, chicken, pig’s trotters, and respects his seniors. He dislikes himself when he is unable to keep his anger in. 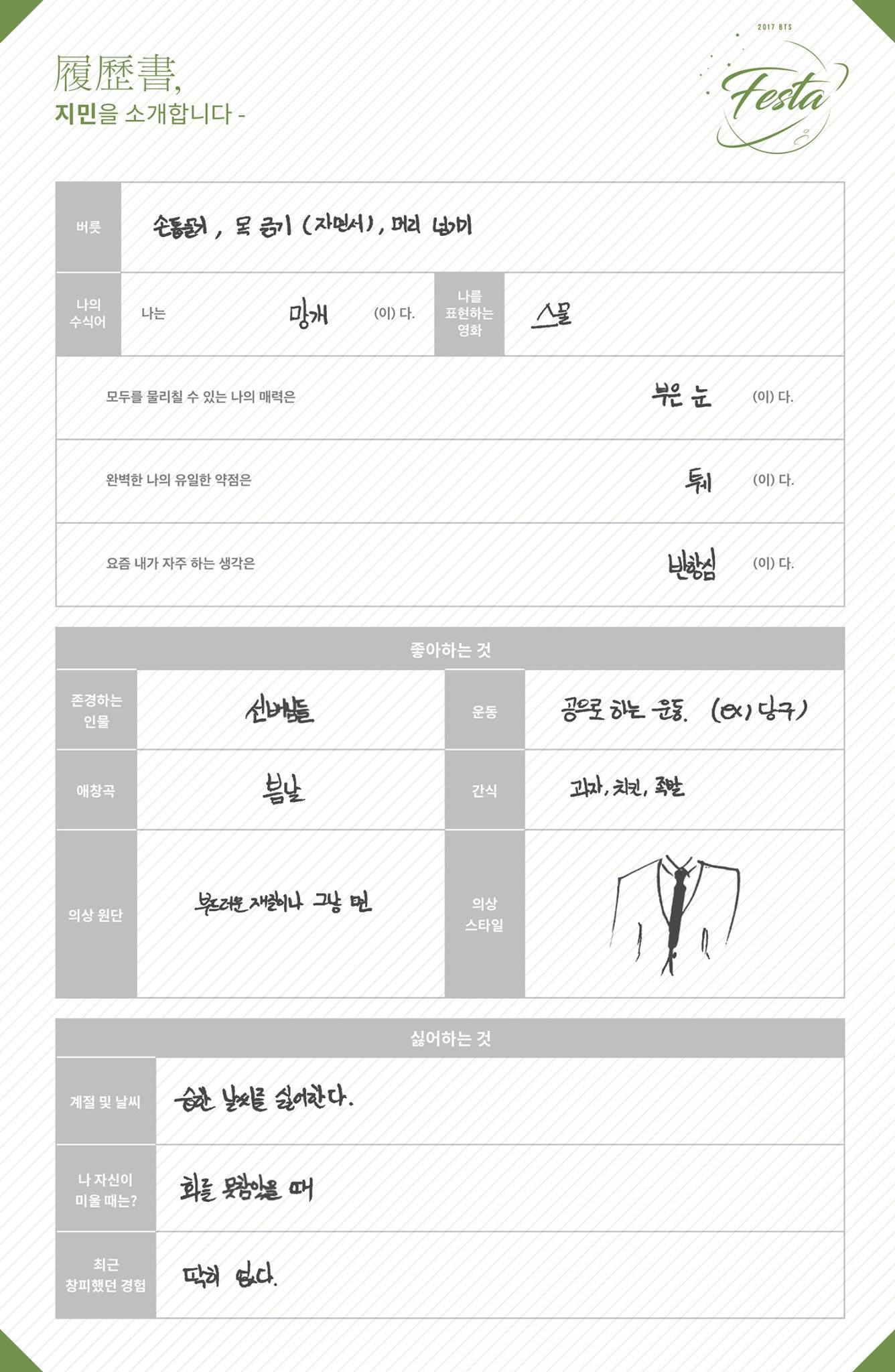 V’s habit is sticking his tongue out. The movie that represents him is “Born to Be Blue,” and he spaces out often these days. He likes leather clothing and dislikes summer. 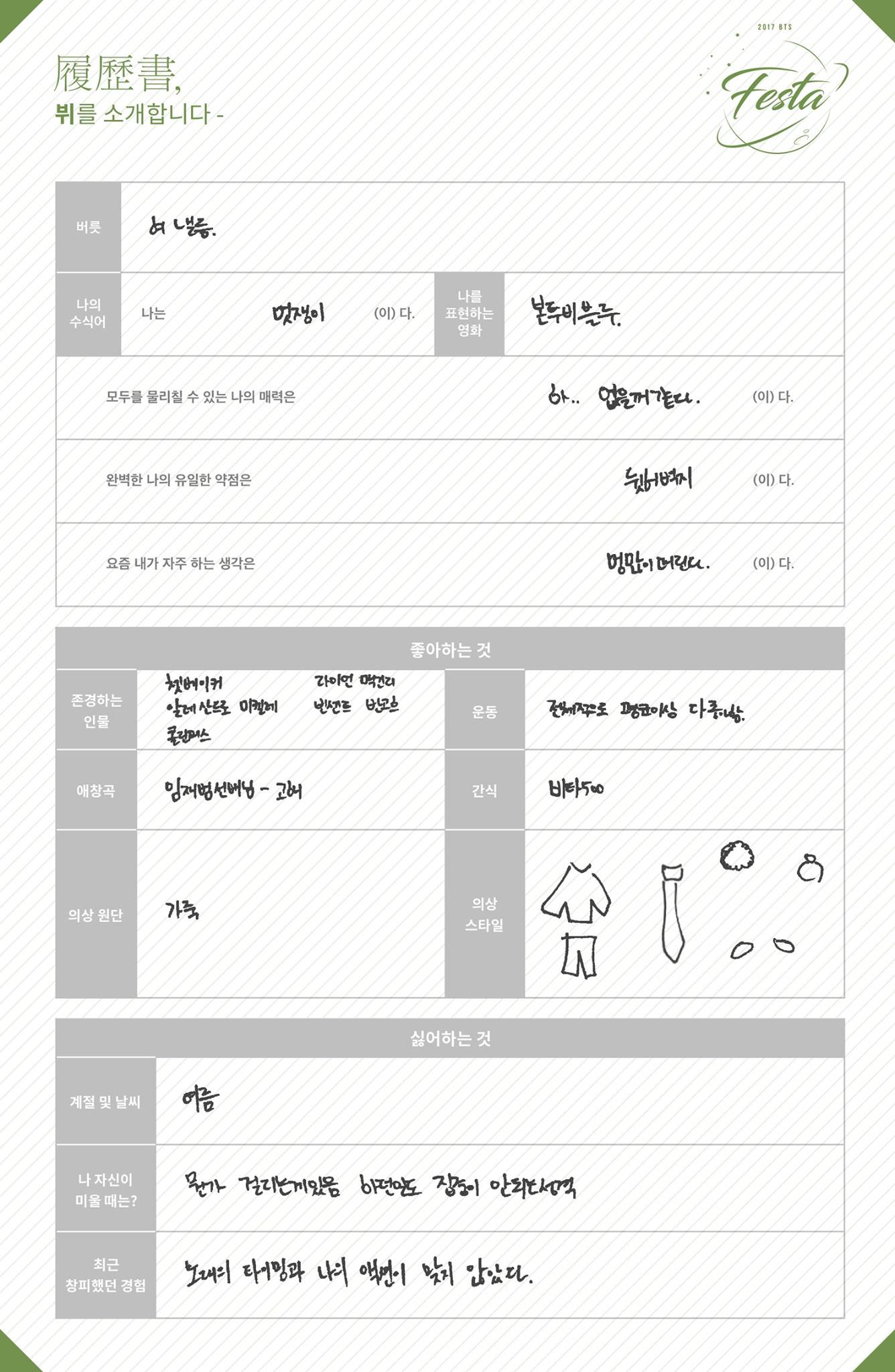 Jungkook’s habits are biting his nails and plucking the fine hairs on his face. His only weakness is that he sleeps too much, and he wants to become good at Japanese and English as soon as possible. He respects himself and likes badminton, bowling, and comfortable clothes. He dislikes humid weather during the summer. 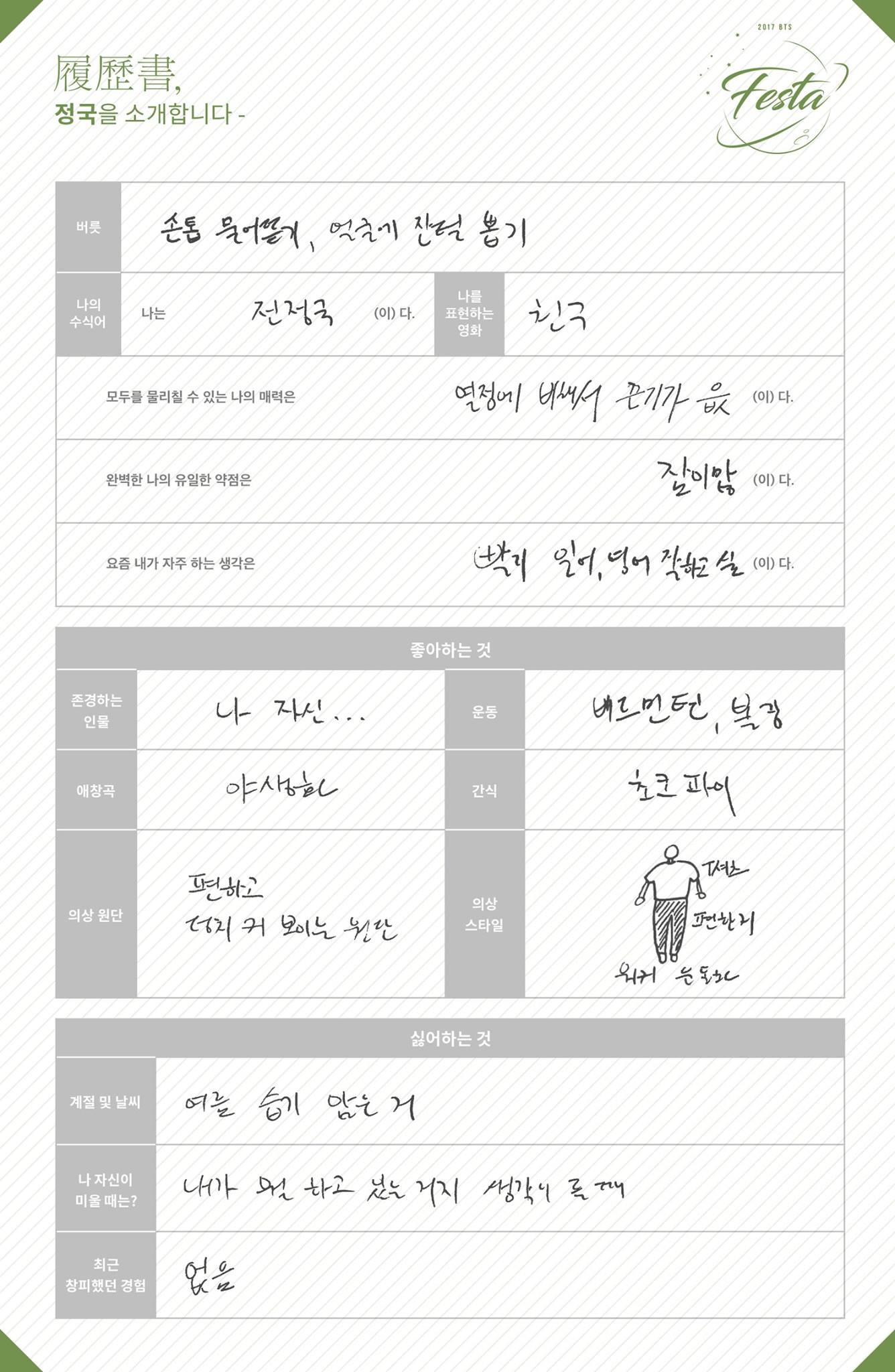 In their third pages, the members drew a four-part comic showing their growth and wrote about their relationship with other members, while their fourth pages describe each member’s goals and what their brains are filled with recently. In their last pages, the members freely showed themselves off, revealed their MBTI results, and included a letter of recommendation from another BTS member. Check out the rest of their résumés here!

Some of their previous releases from the “2017 BTS Festa” were a self-filmed version of their “Wings” performance at their concert tour, Jungkook and Jimin’s cover of “We Don’t Talk Anymore,” Rap Monster and V’s new ballad track “4 O’Clock,” a family photo of the members wearing their previous stage outfits, and much more!

Make sure to check the schedule for the “2017 BTS Festa” and stay tuned for more updates!

This article has been updated to include all seven members’ résumés.