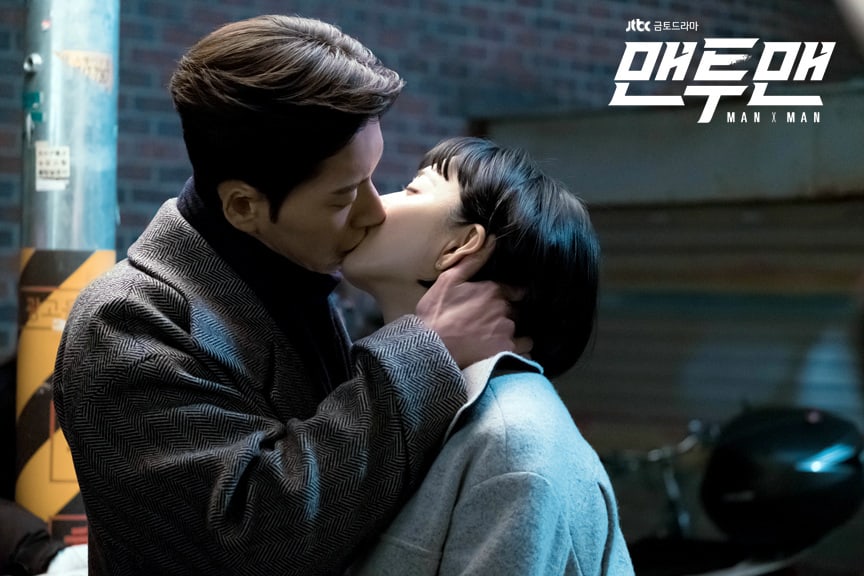 JTBC’s drama “Man to Man” came to an end this past weekend and actor Park Hae Jin, who played the lead role of black ops intelligence agent Kim Seol Woo, sat down for an interview to talk about kiss scenes in the drama, his next project, and his thoughts now that the drama has come to an end.

When asked about his many kiss scenes with fellow co-star, actress Kim Min Jung, Park Hae Jin responded, “Kim Min Jung and I had a total of four kiss scenes together. It seems like there were so many more because those four kiss scenes usually took place at the end of episodes, so they were shown at the beginning of the following episode as well.”

He continued, “We filmed the first kiss scene somewhere warm but the second and third kiss scenes were filmed when it was negative 10 degrees Celsius. I remember how cold the wind was when we were filming those scenes. The last kiss scene took place on a set that was supposed to be my character’s safe house. It was my first time filming a kiss scene at that level so I felt really shy while filming it.”

When asked for his thoughts on the reception of the drama, the actor said, “While the reception wasn’t 100 percent satisfactory, I think that we still created a good drama. Viewer ratings aren’t everything. The drama that came before ours (“Strong Woman Do Bong Soon“) did very well, there was an election, and there were also long weekends. It’s not like we didn’t know about these factors in advance and so those were the burdens that we knew we had to carry. I hope that many will watch the drama later on.”

Like “Man to Man,” Park Hae Jin’s next drama, “Four Sons” (tentative title), will be pre-filmed. The actor said, “When I work on pre-filmed projects, I feel like I have more time to study and discuss my character with production staff. Plus, the script is finished when we are filming and more time can be put into editing. Filming a drama in real time is far more exhausting, since we sometimes film for days with very little sleep; however, we also receive immediate feedback about the drama, which is a plus.”

Meanwhile, Park Hae Jin will begin filming for his next drama “Four Sons” sometime in the latter half of this year. Plus, the actor discussed his dating style in another interview.

Man to Man
Kim Min Jung
Park Hae Jin
How does this article make you feel?