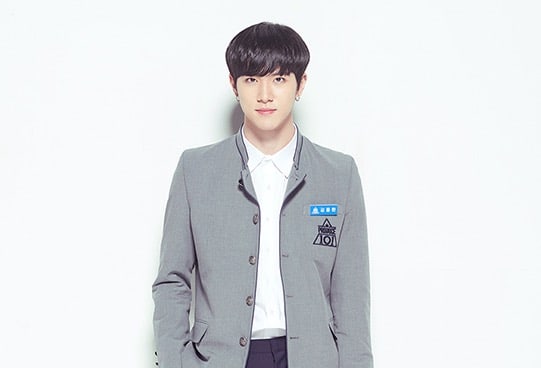 Kim Dong Han, who was eliminated on last week’s episode of “Produce 101 Season 2,” sat down for an interview about his experience on the show.

Ever since he was little, Kim Dong Han enjoyed singing and dancing along with performers on TV. In his second year of high school, he became part of a dance team that won various awards at dance contests, and he later moved from Daegu to Seoul, joining a busking K-pop cover dance group called DOB.

Kim Dong Han revealed that his role model is BTS, and his favorite member is Jungkook. He said, “I started liking BTS before they became popular. They were really cool, and their songs and choreographies were the kind I liked. I’ve never seen them in real life, but I definitely hope to meet them,” and added, “I want to work hard to improve in singing so that I can become an idol like Jungkook who is skilled at both singing and dancing. My goal is to become an idol who performs so well that other guys will want to replicate my group’s performances.”

Asked to predict who will take first place on “Produce 101 Season 2,” he said, “I want Park Ji Hoon to win. We practiced together a lot because we were in the same rank since ‘Pick Me.’ We’ve been close since then, and it would be nice if a friend of mine wins. It will also be cool if the person who took No. 1 in the first round takes No. 1 in the final round as well.”

Lastly, he thanked his fans for supporting him despite the short screen time he was given in “Produce 101 Season 2” and said, “To live up to everyone’s expectations, I will practice hard to debut as soon as possible.”

Produce 101 Season 2
Kim Dong Han
How does this article make you feel?