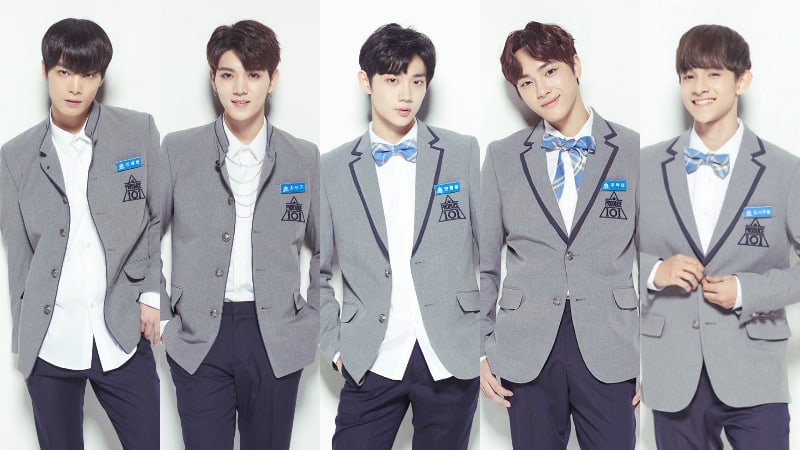 On June 16, “Produce 101 Season 2” aired its final episode and confirmed the top 11 contestants that will join project group Wanna One. Nine trainees were unfortunately eliminated, and several took to social media to express their gratitude to fans.

Check out some of their messages below!

Kim Jong Hyun wrote on his Instagram, “Thank you so much to the fans that have supported me to this point! It is now a great memory that I have gained a lot from!” and added that his fans are the best.

Choi Min Ki posted, “Thank you so much to the fans that have supported me! With the thought that it might be the last, I wanted to do my best, but I would be lying if I said I wasn’t afraid. However, I think I was able to endure until the end because I gained courage from all of you that said you are proud to be my fan.”

He concluded, “There were difficult times, but you have worked hard to be with me as my support and warm light. I will work harder for everyone that has supported me and will cherish you more. I love you. A lot.”

Ahn Hyeong Seop uploaded two selfies with the message, “I was able to stand on the big stage that was the finale, and I think it was all thanks to the national producers that have supported me. I was very happy to perform many times and learn a lot thanks to your great love.”

He continued, “This may be the end of Ahn Hyeong Seop as a Produce 101 trainee, but I will greet you again after growing more to show a better side of myself. I really thank you and love you. Please remember me, and until now, this has been shining flame Ahn Hyeong Seop. Thank you.”

Cre.ker Entertainment trainee Joo Hak Nyeon shared a handwritten letter, starting, “First of all, I would like to really thank the national producers that gave me a lot of love during Produce 101. Thank you so much to the directors, producers, writers, and all the staff that work hard but aren’t seen! I really learned a lot besides dancing and singing also thanks to staff.”

He then addressed his fellow contestants, writing, “You are all so so kind and talented, and I think there was so much to learn from you. We say goodbye for now because the program is over, but I hope all 101 of us can meet somewhere else as even more improved people.”

He ended, “There were difficult times while filming Produce 101, but I was able to gain strength and work hard by reading the letters you sent to my agency and realizing how happy of a person I am. I showed aspects that I was lacking in during the show, so I will work to fix them and meet the expectations of those that support me! I will practice hard to quickly greet you as an improved Hak Nyeon. Thank you.”

A video was also uploaded with the caption, “I went to see my subway ad at Hongdae today! Thank you so much for supporting me until the end. I will greet you again as a more improved person. Please continue to support me a lot!”

Samuel Kim’s message reads, “Hello~^^ (Deer-muel) This is Samuel Kim. Thank you for all of your love and attention until now. I will never give up and keep my dream of becoming a singer~ ^^ Through ‘Produce 101 Season 2,’ I would like to sincerely thank the national producers and everyone else. I will work hard and there will be good things in the future so please send me lots of love. Also, thanks to everyone at our company and our representative @bravebrosyh. My fans~ I love you. I’ll work hard to see you all again through another stage.”

On June 17 KST, Jung Se Woon uploaded a hand-written letter and a selfie to his new Instagram account. His letter reads, “Hello, national producers! This is Starship trainee Jung Se Woon. I wanted to convey my feelings of gratitude once more to the national producers who have cheered me on. During the long yet short time I spent on ‘Produce 101 Season 2,’ I was very happy to have been able to get to know our national producers. Singing and playing the guitar was all I had known about, and ‘Produce 101 Season 2’ was a program that led me to experience many new things.”

He continued, “From the agency performances to ‘Pick Me,’ ‘Be Mine,’ ‘Playing With Fire,’ ‘Oh Little Girl,’ ‘Hands on Me,’ and ‘Always,’ I cannot forget any of these stages. I am thankful, and it was a valuable experience through which I learned many things. Without forgetting this precious experience, I will ingrain them in my mind and show that through my behavior and music. Instead of blindly chasing for my dreams, I will be thankful for the things I am able to do now, enjoy them, and work hard. I will become someone who can succeed without pursuing success. And I will never forget that all of you were always there, cheering for me!”

In conclusion, he wrote, “Once again, thank you for believing in me and supporting me. I will repay that with good music. This was Ponyo. Be happy.”

On June 18 KST, Kang Dong Ho took to his personal Instagram account to thank fans for their support during his appearance on “Produce 101 Season 2.”

The singer shared a portion of the lyrics from NU’EST’s “Thank You (evening by evening)” with the line “Thank you, always,” highlighted.

His caption also read, “I’m so grateful for everything. I want to keep showing you a better side of me in the future and thank you so much for giving me that opportunity. I promise to do my best.” He then used hashtags to write out the names of all five members of NU’EST.

Best of luck for the future to all the trainees from “Produce 101 Season 2”!