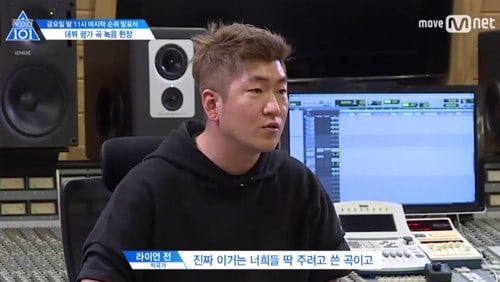 Ryan Jhun played a significant role in Mnet’s hit survival show “Produce 101 Season 2” by participating in producing the theme song “It’s Me (Pick Me)” and the debut evaluation track “Super Hot.” During a recent interview, he talked about the trainees on the show.

“I want to congratulate Wanna One for achieving their dreams. I feel sad for the trainees who didn’t make it to the [top 11], but this isn’t the end for them. I hope they will also become successful singers one day,” he expressed.

Ryan Jhun then revealed that he was especially rooting for Kang Dong Ho. “I was really sad that Dong Ho didn’t make it to the top 11. I personally sent him messages of support,” he shared.

Fortunately, Pledis Entertainment recently announced that NU’EST will be making a comeback, so fans will be able to see Kang Dong Ho back in the music scene fairly soon!

Ryan Jhun
Produce 101 Season 2
Kang Dongho
How does this article make you feel?