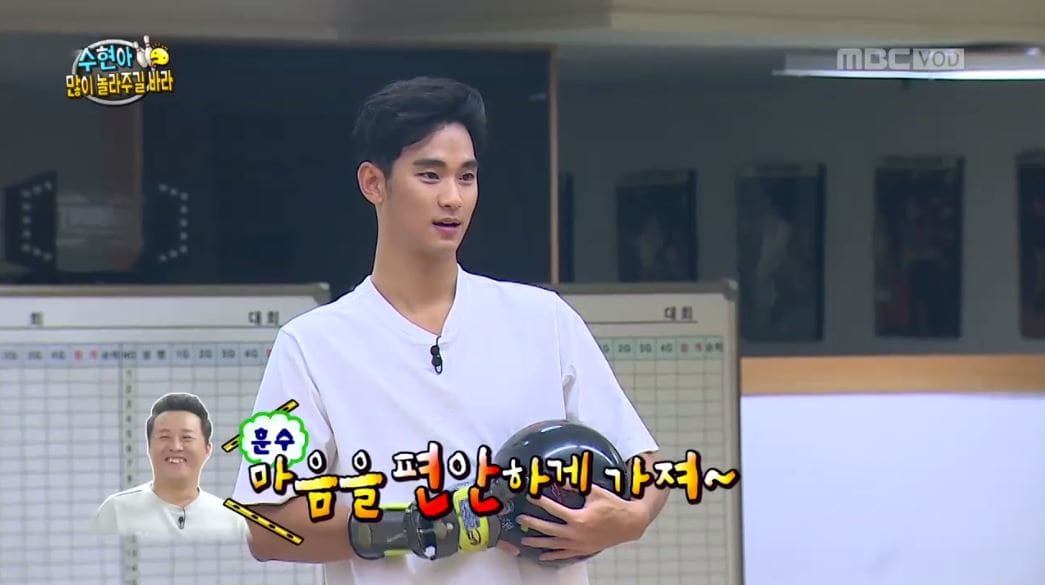 Kim Soo Hyun was back on “Infinite Challenge,” ready to claim his title as bowling champion, until the unexpected happened.

On June 24, MBC’s “Infinite Challenge” aired a special called “Let’s find the delicious food truck” featuring Kim Soo Hyun. During the episode, Kim Soo Hyun met the producers of the variety program and was presented with an award for winning the bowling competition.

At first, Kim Soo Hyun thought the gift was a bowling ball, but it was actually a box with a letter inside, which read, “We’ve prepared a food truck as your present. Let’s bowl one more time, Soo Hyun.” Upon reading the letter, the actor responded positively. He said, “Last time I was on the show, I said I usually bowl a 190, but I ended up getting 170 to 180. I need a chance to redeem myself. I still have so much to show.”

However, the cast members of “Infinite Challenge” had prepared a plan to ensure their victory. They manipulated their lane to make all of the pins collapse in a strike no matter how the ball was thrown. When their match with Kim Soo Hyun began, the cast members consecutively made strikes, causing Kim Soo Hyun extreme confusion. He had no idea what was happening.

But in the end, Kim Soo Hyun found out about the secret. Laughing, he said, “The pins collapsed in the opposite direction.” Now that the secret was out, Park Myung Soo threw the ball after doing a crazy turn, and he still got a strike thanks to their fabrication.

Watch the funny episode below!

Kim Soo Hyun
Infinite Challenge
How does this article make you feel?