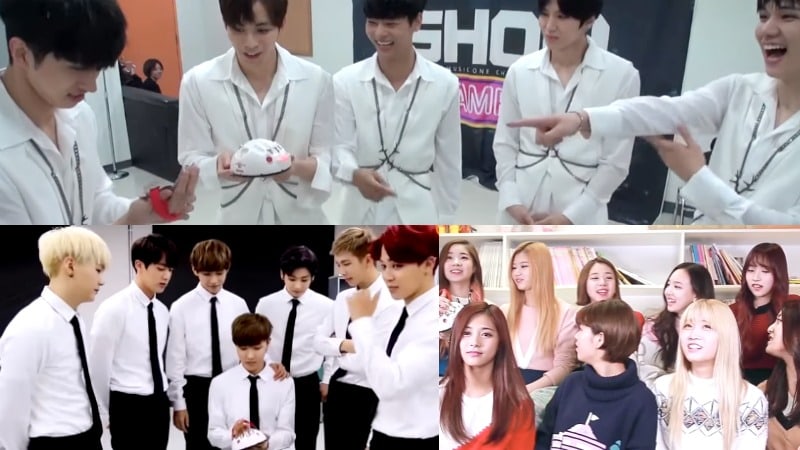 The lie detector test is no joke: if you aren’t telling the truth, you’re in for a shock! Many idols had to place their hands on the device, but only a few of them could pass the test. Get ready to find out their reactions to the electric shock! Do you think your favorites managed to escape the penalty?

BTS – Your existence itself is a lie!

First on the list are the seven heartthrobs of BTS. They reveal fascinating secrets about each other during the game, and you get to know who is the one without any friends, who’s a real idiot in the group, and whether food is the most important thing for Jin or not.

Plot twist: it’s not Jimin after all who’s caught in a lie.

VIXX – But we don’t have a leader?

The six charming guys of VIXX were promised a prize if they pass the test, so the motivation was high to tell the truth. However, there were some risky moments for N and even his position as a leader was threatened.

Did VIXX immediately find a new leader? The only way to find out is to watch the video below!

B.A.P’s lie detector game gave the maknaes a chance to show us how fed up they are sometimes with their older members. But the greatest mystery was Daehyun’s case. Check out why he got shocked in more ways than one!

Whatever BTOB does on variety shows makes us all laugh out loud, so it’s no wonder their “truth or lie” game was hilarious, too. Their reactions were unusual as well. Although he got caught, Peniel was happy about his penalty, and the others were convinced that the faulty device was to blame for their lies.

MAMAMOO – I’m not that much of a pervert

When the girls of MAMAMOO saw the opportunity to take the lie detector test, they weren’t afraid to ask the essential question: who is the real pervert among them? At first, Wheein stated that all of them were perverted, but, according to the test, there’s only one real pervert.

Find out who she is!

Taeyeon, Tiffany, and Seohyun got to play around with the lie detector, and they even managed to ask their manager some tricky questions. It was Tiffany who wanted to avoid the game the most, and she got in trouble for telling the truth in the end.

Why? Check out in the video!

JYJ – My butt is the cutest

Lie detectors at fan meetings are so much fun because you have way more time to test your members’ honesty. JYJ was so good at telling the truth in the first few rounds that they decided to tell lies on purpose. The boys asked each other about butts, kisses, and older women, too. Everything for the fans, right?

NU’EST – I’ll dress up as a girl more often

JYJ’s test was even mentioned when the boys of NU’EST decided to play the game, as Minhyun is a big fan of JYJ’s Junsu. If you want to know how the boys reacted to Ren dressing up as a girl, you need to watch this one!

Cross Gene accepted the challenge, too, but some of them were really afraid of the electric buzz. They still managed to ask each other some silly questions and even found the real savior of the group!

BESTie – Our group is full of liars

The BESTie girls are bubbly and loud in their “truth or lie” game, and we got a chance to know more about their secrets, including their album’s success, the four girls’ sexiness factor, and imaginary boyfriends.

PENTAGON – Are you actually a scumbag?

Being in a group of ten leaves plenty opportunities to stay secretive, but even the members of PENTAGON had to reveal some fun facts while playing their “yes or no” game. Are there any scumbags in the group? Do they want to be in a relationship? And most importantly, who is the real main vocalist? You can listen to their answers in the video below!

KNK – He said he wants to eat me

KNK is known as a group with extraordinary fan service skills, and they didn’t disappoint us with their lie detector test, either. They took the game to a whole new level, as they spent almost an hour playing with the device. As expected, their reactions were loud, crazy, and all over the place!

Was Chunji jealous of Niel’s solo debut? Is Ricky actually a pervert? Does Changjo think C.A.P is the most handsome member? These are all questions Teen Top fans wanted to ask their favorites without a doubt, and we all got the answers from the boys themselves!

The lovely girls of TWICE were really honest during the game, but according to Sana, it’s only because they received this kind of education at JYP. They even tell the truth about their PD-nim’s fashion sense and their visual ranking among new girl groups.

Which one of these crazy games was your favorite? Did your biases tell the truth? Tell us in the comments below!