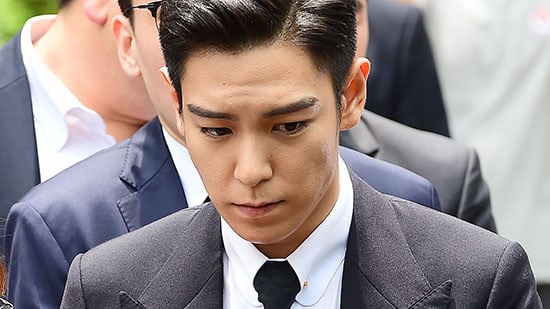 Lawyer Indirectly Confirms T.O.P Was In Relationship With Trainee Involved In Marijuana Case

Earlier, BIGBANG’s T.O.P acknowledged all charges made against him during the first trial for his marijuana case.

During the closing arguments for his trial, T.O.P’s lawyer made a statement that indirectly confirmed T.O.P’s relationship with the trainee involved in the marijuana case. His lawyer stated, “At the time of the incident, T.O.P was in an unstable place psychologically and met the trainee for drinks. He was very intoxicated at the time and decided impulsively [to smoke marijuana]. He admits to all the charges and is very remorseful for his actions.”

He continued, “T.O.P acted the way he did following the trainee’s suggestions after drinking. After breaking up with the trainee, T.O.P stopped smoking marijuana.”

YG Entertainment released a short statement in response to the many inevitable questions regarding T.O.P’s relationship with the trainee and said, “Beyond what information has been released from the court, it is difficult to confirm anything.”

T.O.P also took time to apologize and said, “I sincerely apologize to everyone I have hurt or disappointed through this incident. I have made an irreversible mistake because of my unstable mental state of being and am reflecting deeply upon my actions.”

He continued, “This incident is the worst moment of my life and I am regretting it terribly. I will receive my punishment readily and make sure that nothing like this ever happens again.”