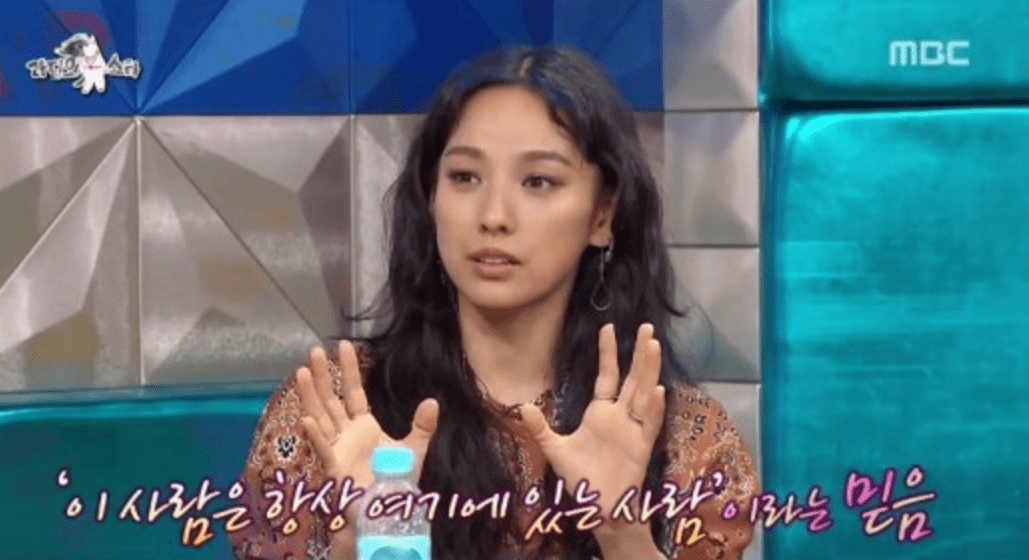 On the July 5 episode of “Radio Star,” Lee Hyori, Chae Ri Na, Kahi, and Narsha appeared as guests where and talked about their careers and their marriages.

About her husband, Lee Hyori said, “Lee Sang Soon is someone who fits well with me. He doesn’t have emotional ups and downs. Unlike him, my emotions are like a rollercoaster and I think the reason I’ve been able to stay popular in the entertainment industry is because I’m sensitive to things like that and able to keep on top of trends.”

She added, “[My husband] does get angry sometimes. Sometimes while driving and sometimes when someone is bothering me. He has a strong protective instinct towards his family. I think he doesn’t get angry often because his parents have a good relationship. He says he’s never seen them fight. In general, he doesn’t get angry. I get angry a lot so it balances out.”

Lee Hyori also brought up “balance” again as she gave out some advice on married life. “I have more of a ‘masculine’ personality and my husband is more ‘feminine,'” she said. “I will go to the bathroom with the door open but my husband always needs to go to a different room. One thing I’ve realized is that a person will always be that person. It’s the same whether it’s a man or a woman. You can’t expect someone to completely change who they are.”

True to her word, Lee Hyori said she didn’t have any grudges against her husband. “My husband has an easygoing image but it suits me. He goes out and DJs at places where nobody goes but I’m okay with it. I have a lot of money. My husband makes enough to support his interests. He doesn’t need to go all-out to support the family.”

She added, “He does help me with the household chores, but sometimes when I’m thinking about something he’ll tell me to take it easy. But personally, I think he doesn’t understand me when he says that. I can’t just stop something I’m doing. From an early age I’ve lived as the head of the household.”

Lee Hyori recently made her long-awaited comeback to the music industry with her album “Black.” She and her husband are appearing with IU on the variety show “Hyori’s Homestay.”

Lee Hyori
Radio Star
How does this article make you feel?