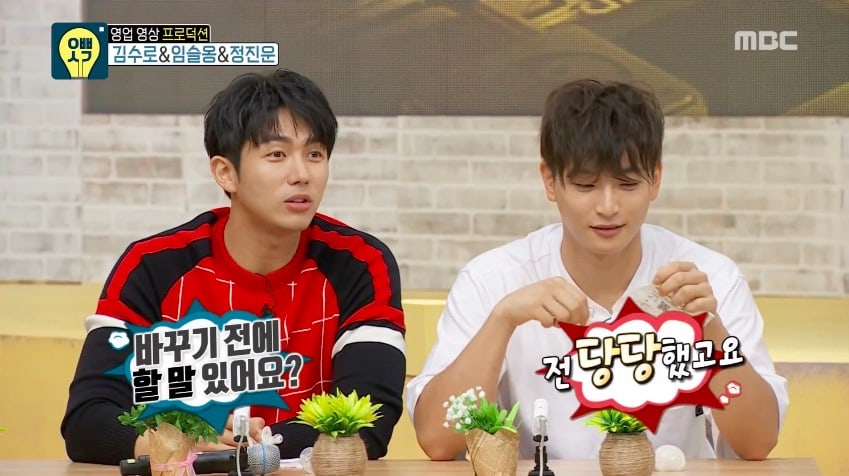 2AM’s Jeong Jinwoon and Im Seulong showed how close they remain by grilling each other on the August 14 broadcast of MBC’s “Oppa Thinking.”

During the show, the MCs asked Jeong Jinwoon, “Have you ever caught Im Seulong with his girlfriend?”

Jeong Jinwoon said that he had a long time ago, and asked for permission from his bandmate to tell the story. Jeong Jinwoon said, “One time, I was leaving at dawn for work and he was just returning back to the dorm. The door opened, and the footsteps were not that of just one person.” He revealed, “Im Seulong had brought his girlfriend to the dorm, because he didn’t have anywhere else to go on dates with her.”

After that, Im Seulong complained that Jeong Jinwoon checks everyone’s text messages but his. Jeong Jinwoon admitted that he had the alerts turned off for his chatroom with Im Seulong. Im Seulong confirmed, “He posts a lot on his Instagram. I comment under his posts, saying, ‘Why don’t you answer my texts?’ and he does reply on there!” making everyone laugh.

Jeong Jinwoon
2AM
Im Seulong
Oppa Thinking
How does this article make you feel?