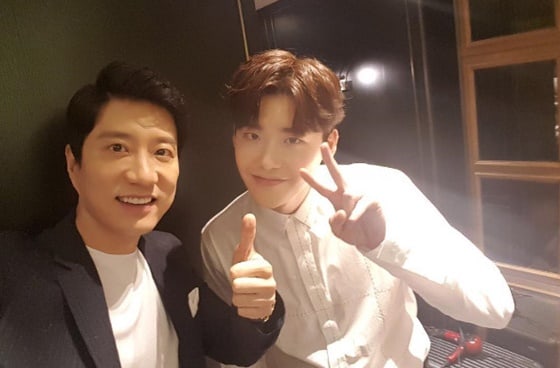 Lee Jong Suk first thanked the actor and said, “I had a lot of scenes with Kim Myung Min. It was my first villain role, and I was scared as it was a new acting challenge for me. However, it helped me a lot that every time Kim Myung Min taught me something, he taught me detailed points that would help evoke emotions better rather than be abstract.

Kim Myung Min responded by saying, “I’m not the type of person that will directly approach people first. But Jong Suk is that type of person. If he is frustrated or unsure about some parts, he will ask, ‘How do you do this part? Please tell me.’ I thought that at first he was acting that way on purpose, but it was nice to see that [he was being genuine]. I have to let everyone [about] how he studies and is passionate even though he’s a top star, since it is so nice to see.”

V.I.P. is an upcoming crime film about four men: a VIP from North Korea who is also a suspect for a serial murder, someone who tries to cover the murder up, a person who is determined to catch the VIP, and a man who is out for revenge. The film will premiere on August 24.

Lee Jong Suk
Kim Myung Min
How does this article make you feel?