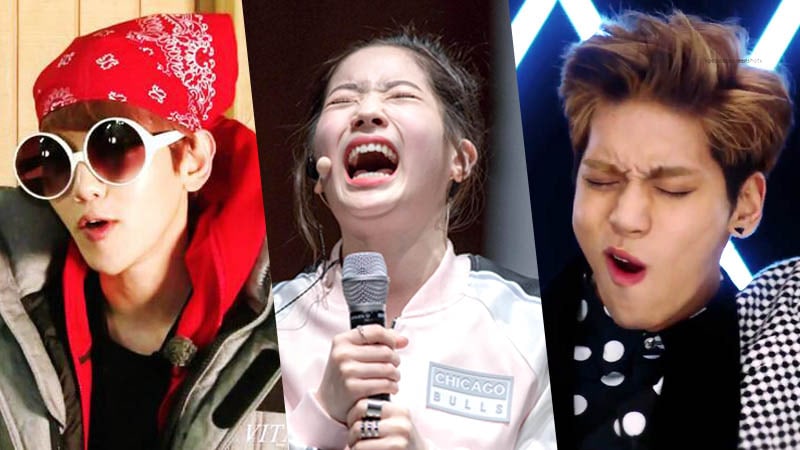 12 Times Our Beloved K-Pop Idols Were A ‘Lil Extra

“Extra,” “no chill,” “4D,” “cray-cray,” “beagles” — whatever you want to call it. Some idols just do things for absolutely no comprehensible reason, but we just love them all the more for it! So here are 12 such instances, and I can guarantee that while at first you will think “what on earth are they doing?” you will eventually end up giggling just like the rest of us! Enjoy~!

During the EXO’rDIUM tour, Baekhyun, in his typical self, decided to have himself some fun with the streamers, and presented himself as a birthday present to Chanyeol. In the end, he had become so entangled he had to get scissors from the staff to cut himself out!

Jisoo vs. the bottle

During the Seoul Music Awards, BLACKPINK’s Jisoo was caught on camera trying to balance a water bottle on her shoulders. Why? Nobody knows…

Jackson vs. the basketball machine

Jackson is a synonym for “extra.” When the GOT7 boys were playing on an arcade basketball machine, Jackson was able to set an incredibly high score! But he accomplished this by doing something probably only Jackson would do — by being Jackson (the part starts at 3:56)!

Dahyun was seen randomly dropping English phrases and sentences during TWICE’s trip to Switzerland. This video is a compilation of such adorableness and silliness, but the highlight of this video is when she says “bonjour” to a passing bird (around 2:14).

Halfway through a V Live broadcast, Eric suddenly jumps up from his seat, runs over to the wall, jumps up and hits it. The other members, without a second thought, follow suit. And in typical Shinhwa fashion, someone gets hurt.

When your member recently appeared in PSY’s “New Face” MV, you know the song is going to come up during variety appearances. Apink’s Bomi kept the dance fresh and entertaining by Bomi-fying the dance, in the way only Bomi can!

Another case of extra-ness ending in an accident. Cue SHINee members laughing at Jonghyun’s mishap, a little too hard. But hey, what are friends for?

Wheein vs. the accidental ad libs

Mamamoo’s Wheein enjoyed adding a little ‘ad lib’ into her “Piano Man” performance during practices. She was so used to doing it, it was caught on mic during actual live performances (yes, more than once!) when Hwasa sneakily held her mic to her.

The members of BTS have a little too much fun with Dubsmash. You’re welcome!

Seohyun vs. “Shake It”

Seohyun, Girls’ Generation’s maknae, always had a rather demure and proper image. But this all goes out the window when SISTAR’s “Shake It” starts playing. Hyoyeon and Sooyoung were just as excited during all this, but Seohyun showed her older sisters how it’s done!

This hilarious clip is well-known among SEVENTEEN fans, where Seungkwan starts spouting English while making kimbap. His exact words include, “Are you kidding me? Are you kimbap kidding me?”

BTOB is another idol group just filled with super zany members who have a little too much fun by themselves. People often think that Hyunsik is the most “normal” one, but boy are they wrong! In summary, he’s grown a flower out of his head, watered it, and had Ilhoon help “fertilize” it (around 8:37). But watch the whole video anyway because, well, it’s BTOB!

Which clip did you enjoy the most? And which idol group do you think is filled with the most “extra” members? Leave your comments below!