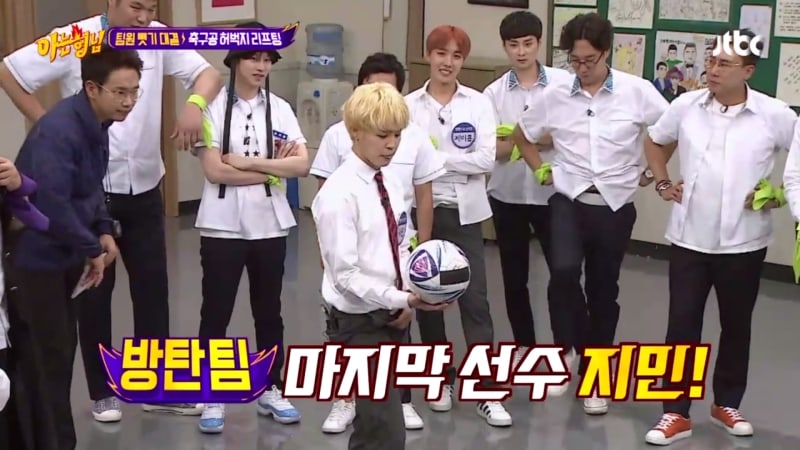 BTS’s Jimin went against Lee Soo Geun with a soccer ball on the September 23 episode of “Ask Us Anything.”

The “Ask Us Anything” crew and BTS each formed a team and competed against each other on soccer ball juggling. A member of each team stepped up and tried to lift the soccer ball with their knee as many times as possible. Whichever team with the highest record would win!

Jimin and Lee Soo Geun were the last members to go on each team. When they stepped up to battle it out, team BTS was winning by 26 points, as team “Ask Us Anything” had a score of 26 and team BTS a score of 52.

Jimin volunteered to go first, saying his highest personal record was only 10. He started off in a stable posture and proceeded to juggle the ball off his knee easily. Jimin went around the whole classroom juggling the ball, awing all the other members in the room. His final record was 46, making team BTS’s score 98.

Kim Heechul tried to comfort Lee Soo Geun, who had to compete against Jimin. “You only have to score 73 more points,” he said jokingly. Lee Soo Geun requested that he juggle with his foot instead of his knee, which was accepted. Lee Soo Geun also began lifting the soccer ball easily, quickly building up to a high record. Team BTS appeared to be nervous as Lee Soo Geun juggled the ball.

Watch the final results below!