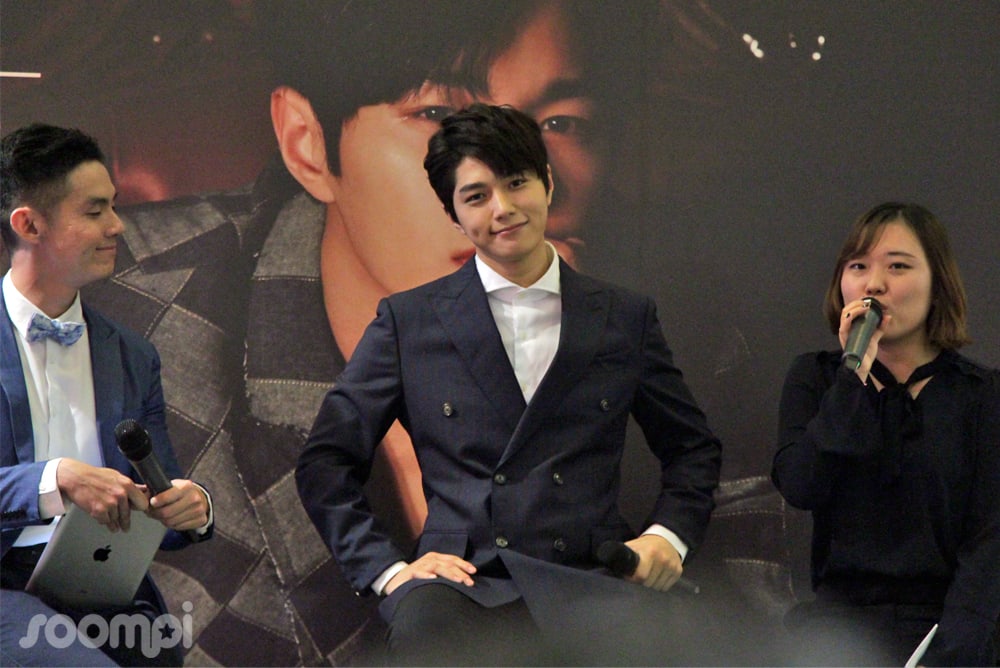 INFINITE’s L, also known as Kim Myung Soo, took time to meet with the Singapore press on Friday, one day ahead of his fan meeting. Although he wasn’t feeling well and was seen coughing throughout the open press conference, he said he felt really energized after seeing so many people come to see him.

When asked about the difference in satisfaction as a singer and as an actor, L said, “As a singer, I perform on stage, singing and dancing and receiving energy from fans right in front of me. As an actor, I differentiated myself from L as Kim Myung Soo and you can see different aspects of me that I wasn’t able to show you on stage. So the benefit of being an actor is that you can see me in different roles instead of me being myself. I hope to continue being an actor and to have a solo album as well. I also want to come back for another fan meeting again.”

While some viewers might be dissociated between L and Kim Myung Soo, the multi-talented L surmised that it might gain him more fans with the rebranding of himself as Kim Myung Soo. He said, “When I first debuted as L, people didn’t know that a person called L existed. I have been trying my best for the past seven years, and although there’s room for improvement, I think I’m still approaching fans as L. Although I’ve already began my career as L for seven years as a singer, I’m confident that I can attract more fans as Kim Myung Soo by showing a different side of me. You can watch my growth as both L and Kim Myung Soo, so please have more interest in me and give me your support.” 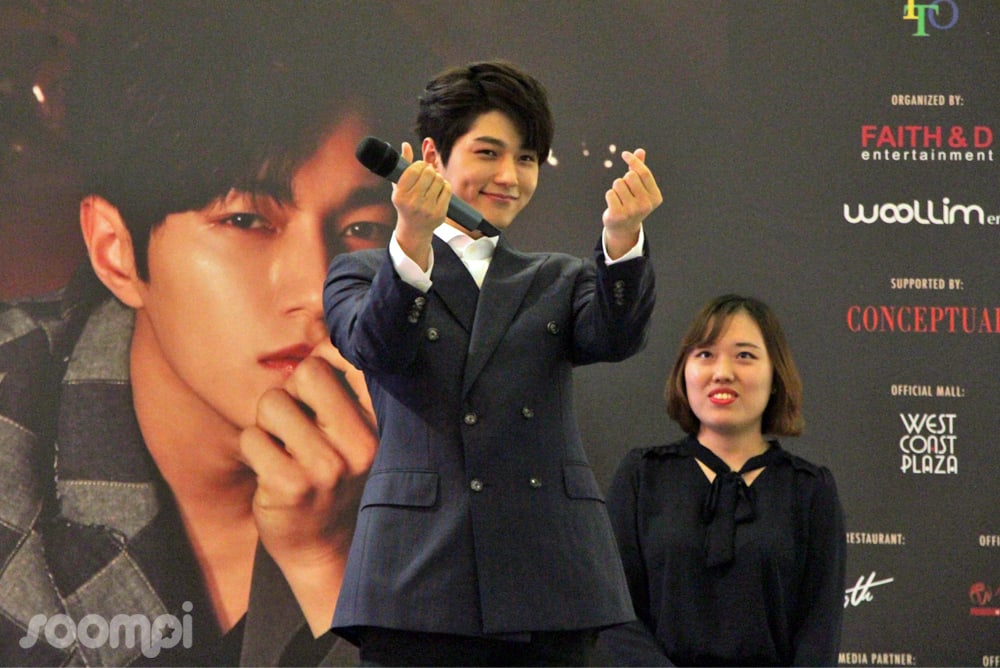 Would L choose friendship over love? He admitted, “Friendship and love are both important to me, and I am quite greedy, so I don’t want to give up both. If the scenario from the drama happens in real life (choosing between friendship and love,) I will choose the most realistic way.”

L shared, “I am trying my best to take a lot of pictures, and I always carry along my camera with me. So if there is any chance I hope to introduce my new photo essay which will be different from the last one. So I hope you guys will look forward to my new photos.” 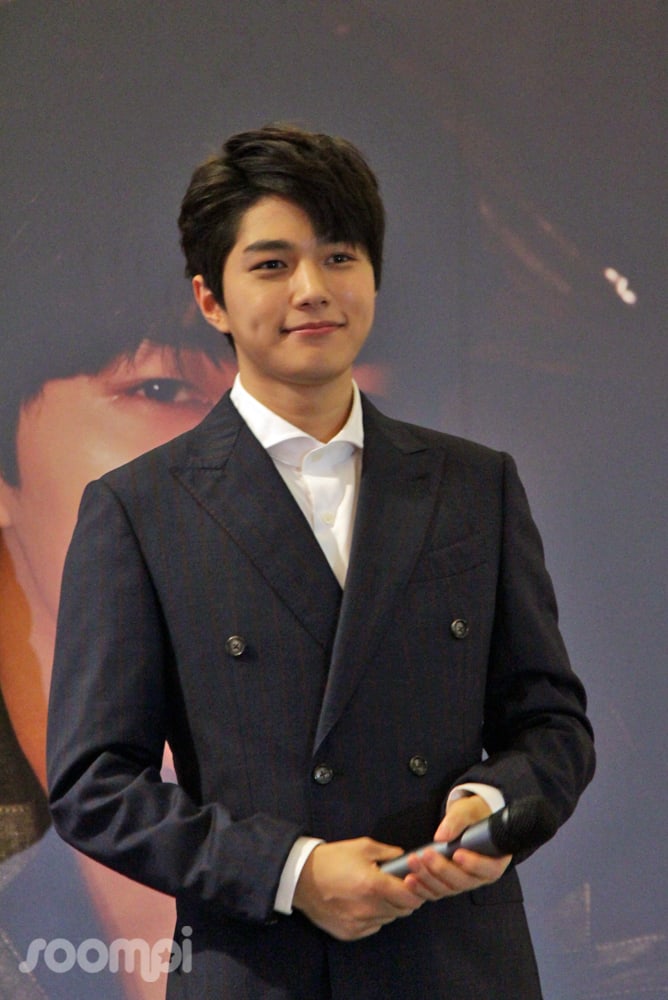 When asked what was the best piece of advice that he has received, L shared that his life’s motto is “carpe diem”, which means “seize the day.” He said, “Even if you have a difficult situation now, don’t look at it as a negative situation and look at it positively, so you will eventually endure and overcome these challenges. I will always remember all the advice given to me by others. After receiving advice, I would ponder over them and put them together, and I came up with ‘seize the day’ (carpe diem). If you think too negatively about reality, whatever you do will turn out bad. That’s the motto that always drives me to seize every day.”

When asked for memorizing tips, L revealed that he was not particularly good at remembering dance moves or drama lines, so he’d always practiced a lot. “Last time, I used to hold on to a piece and spend the entire day memorizing song lyrics, or drama lines. But I have since found out a technique that works well for me. What I do is, try to repeat it frequently at every point almost like having breakfast, lunch, and dinner at a specific time every day. I try to memorize lines or moves at certain times of the day. Rather than holding on to it for very long, I just move on and come back to do it at the same time of the day.” 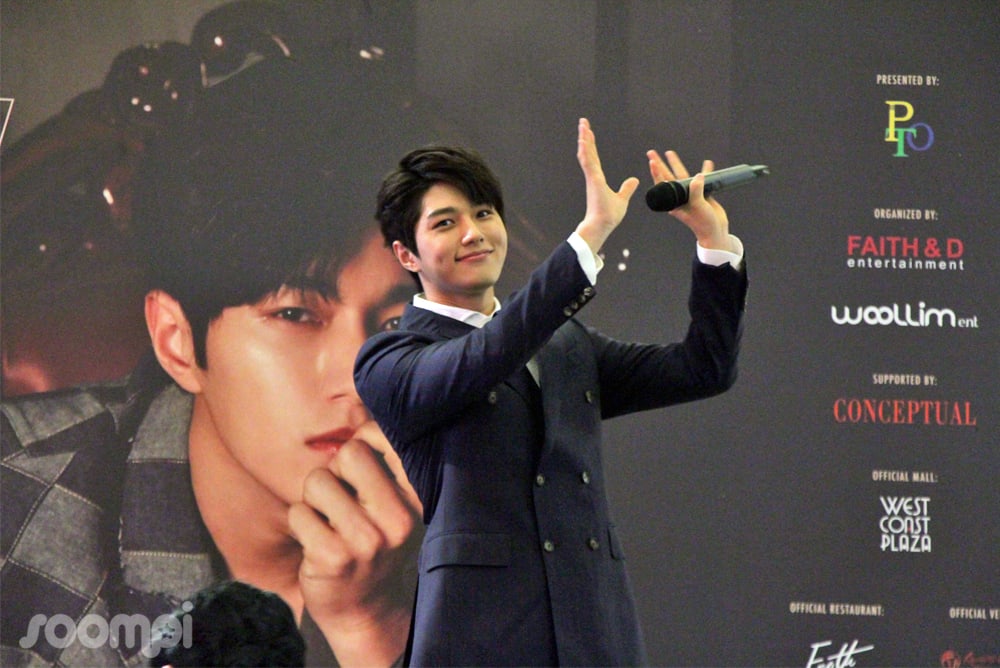 When asked what he hope to achieve by the time he becomes 30 years old, he said, “I think you guys will see me doing the same things but in a better way. I’m 25 and I’m doing my best to express myself at this age, but maybe five years from now I will be more mature and manly. I will continue to be singing, acting, and doing photography. I hope you will ask me the same exact question when I’m 30 to find out if I was doing what I set out to do.”

Highlights from the Fan Meeting

L exudes confidence and charm even though this was his first time standing alone on stage for his solo fan meeting tour. 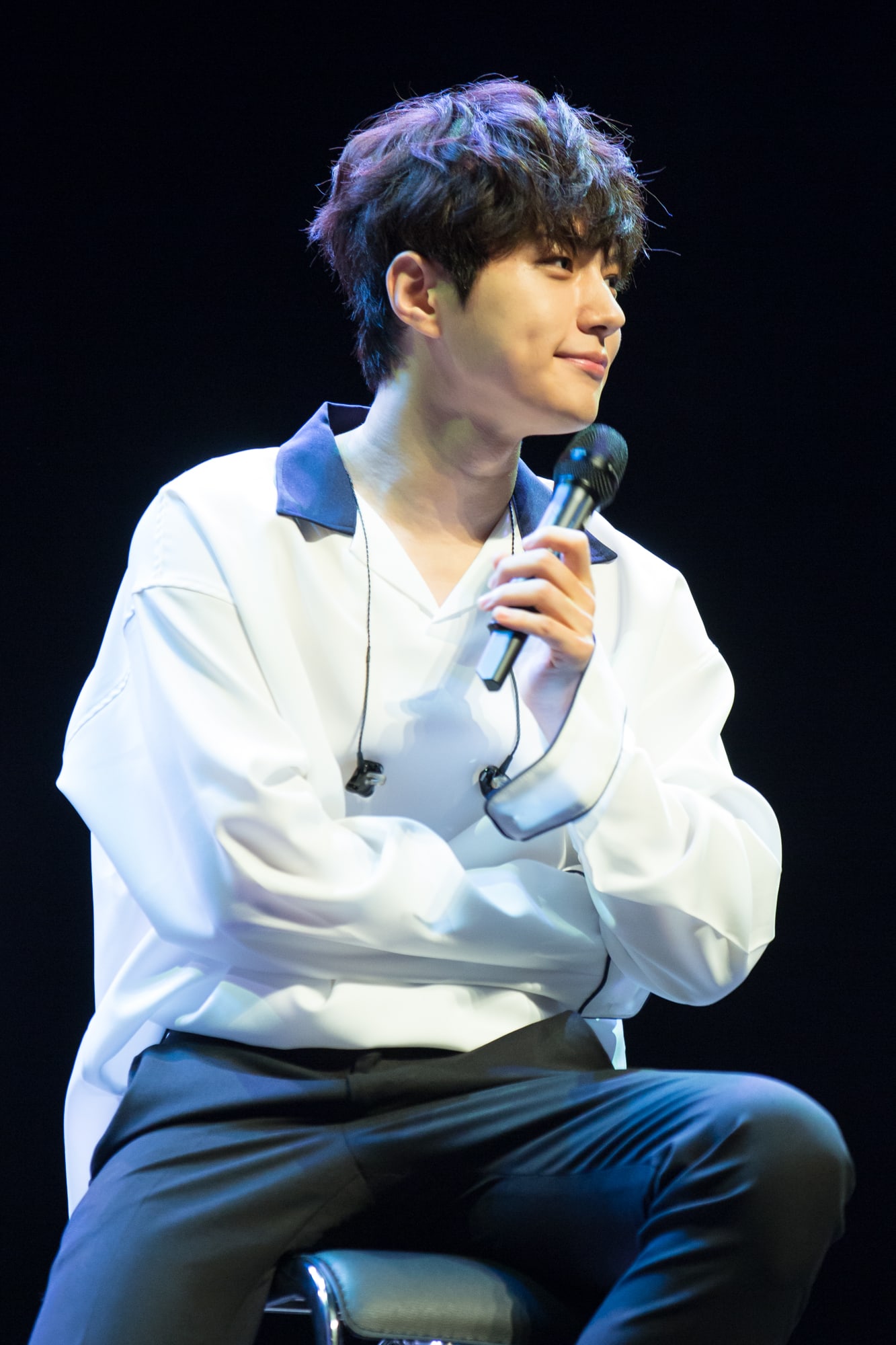 Meeting fans all by himself, not only a chatty and witty Kim Myung Soo was released from his shell, L charms fans and media by singing a local song “Singapura, Oh Singapura”. 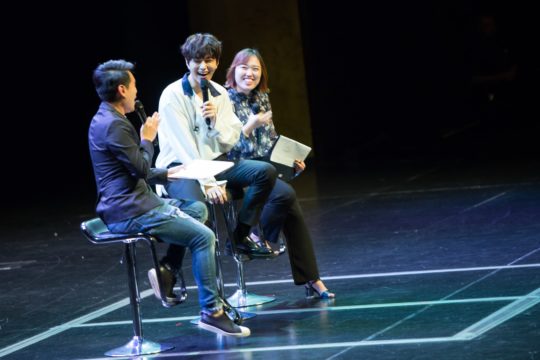 Host Ken taught L a singlish word “abuden”, which literal meaning is “of course, if not, obviously”. L became obsessed with this word and used it at every opportunity. 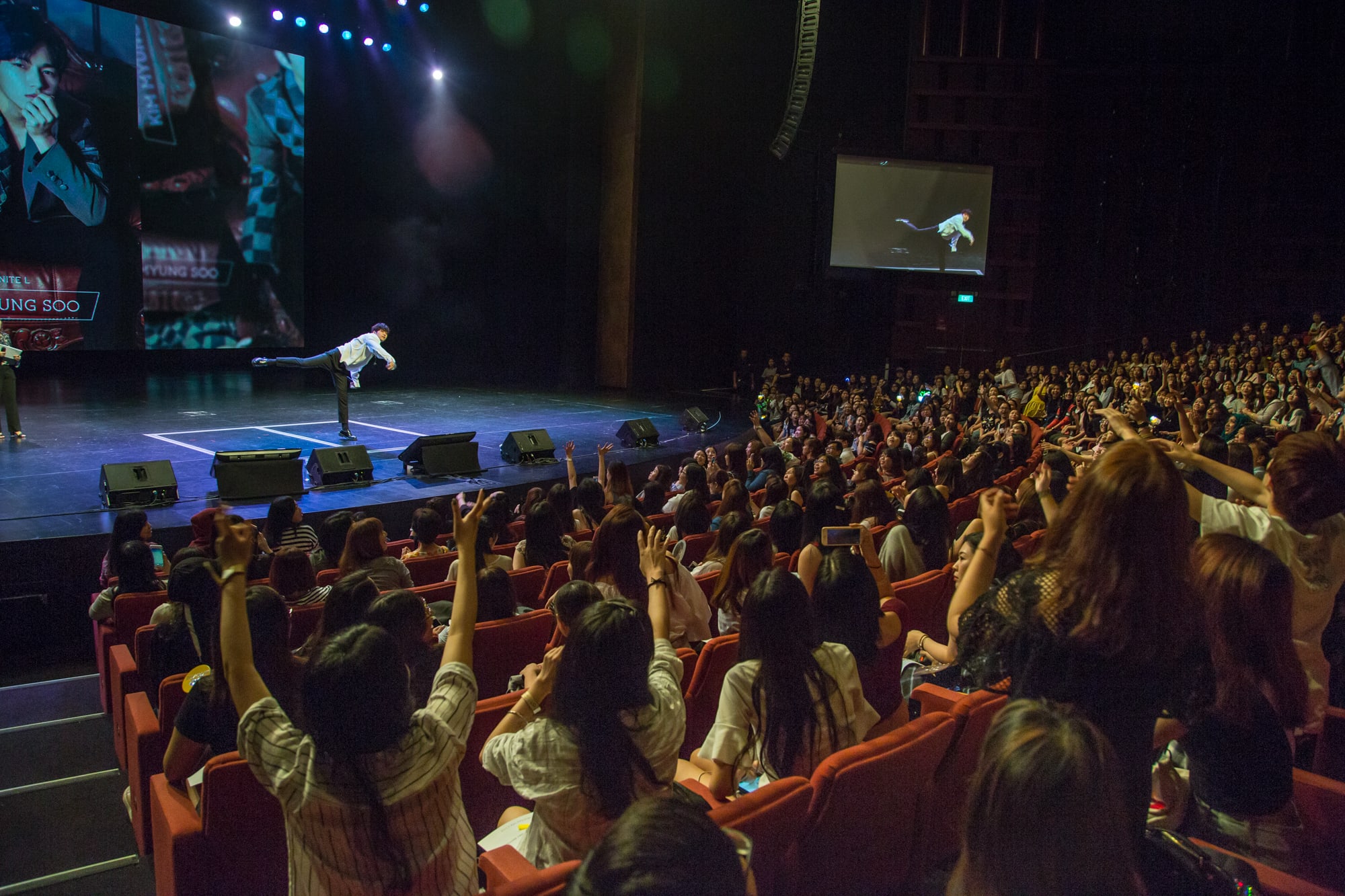 During the game segment, L threw out balls for the lucky fans to catch in order to get the change to go up on stage for an up close and personal interaction with him. 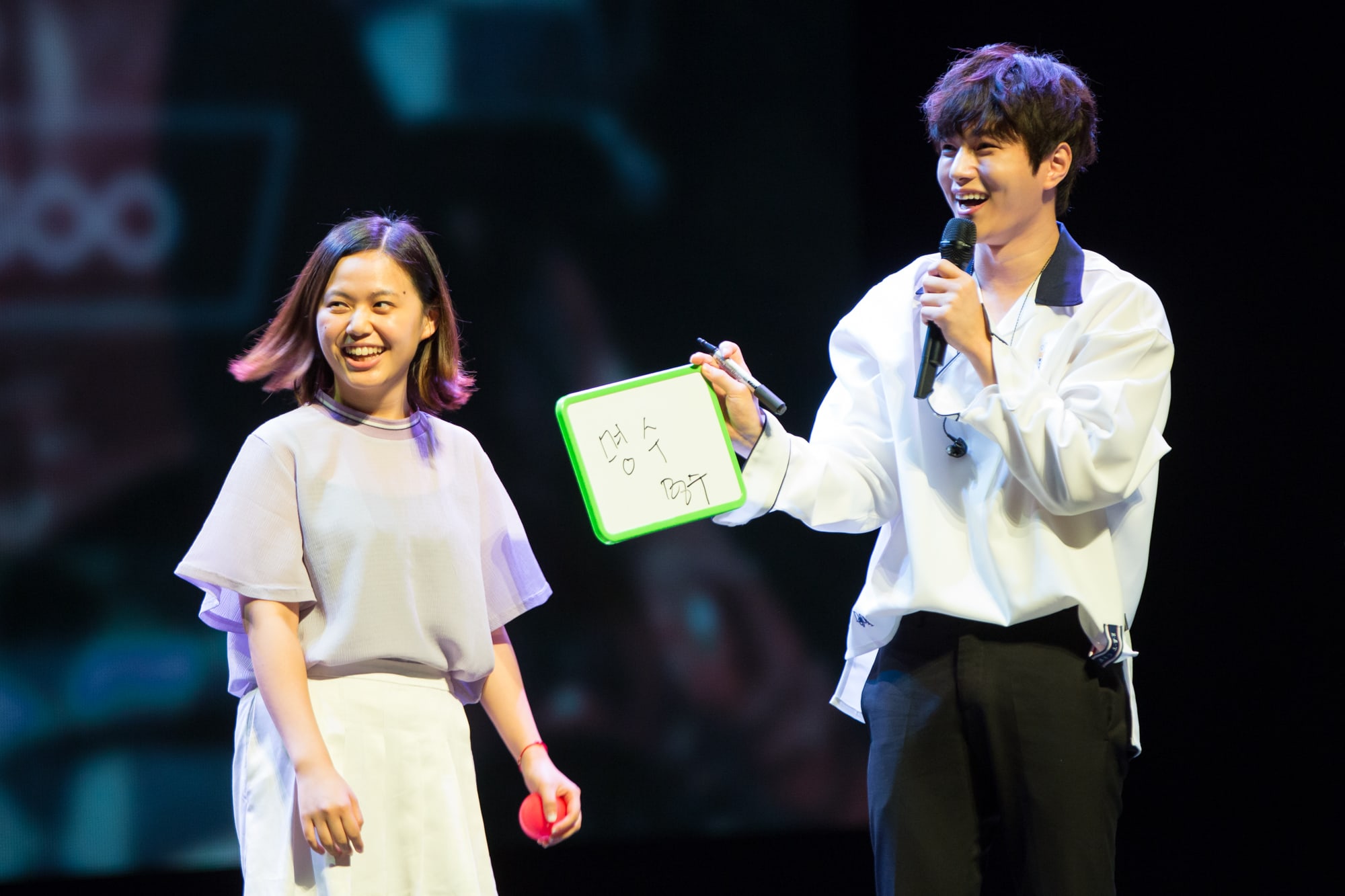 Lucky fans were given scenes from “Ruler: Master of the Mask” to re-enact with L. All of them emerge winners as L couldn’t select just one. Not only did they walk away with autographed postcards personalized with their names, they received hugs from the singer-actor too. 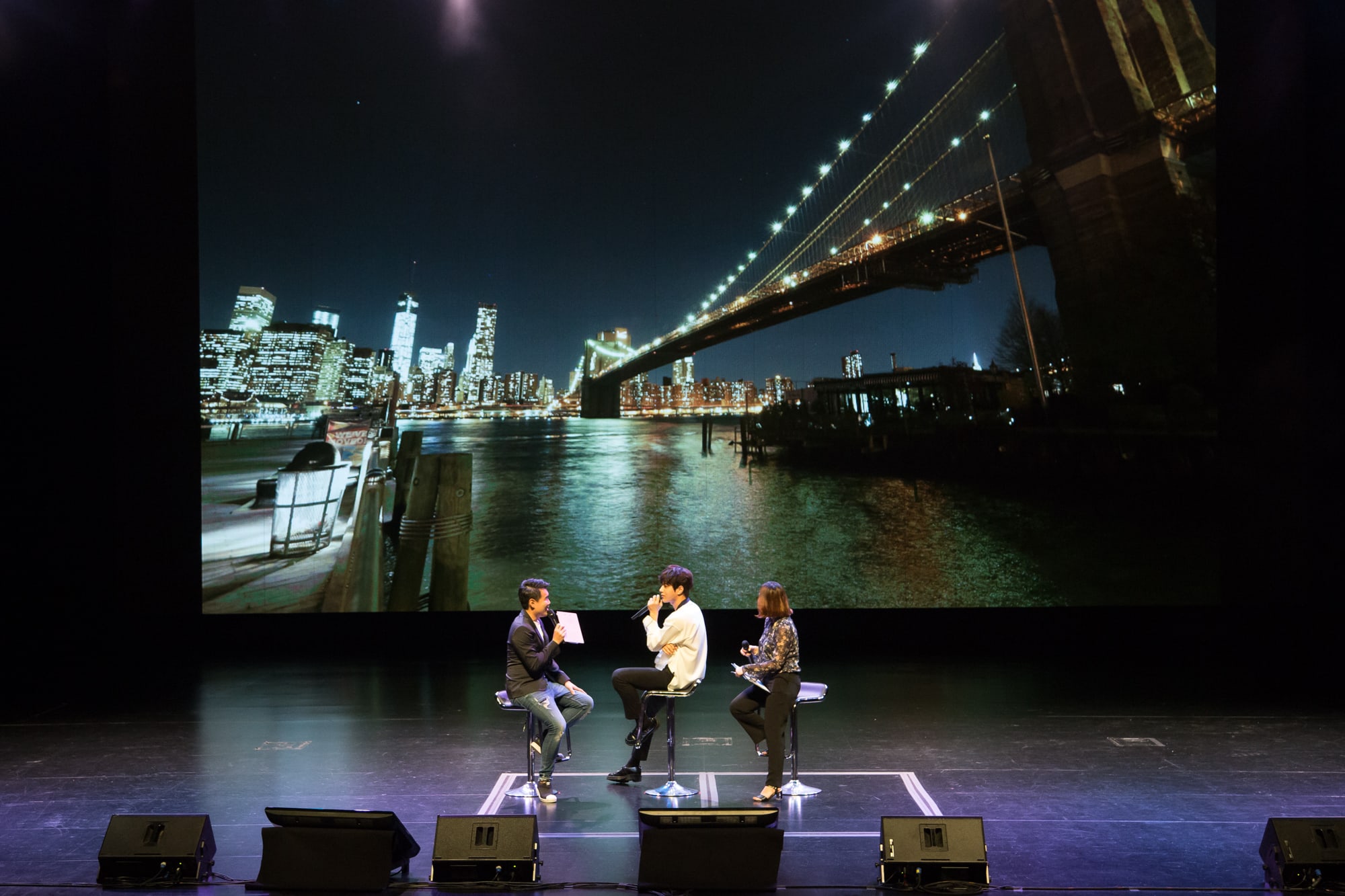 L shares snippets of scenic photography taken by himself. He also found time to take pictures at the Merlion. Among the pictures are a local breakfast image of kaya-butter toast which he said he really enjoyed eating and bought some of the kaya (coconut jam) to bring back home.

Special thanks to Faith & D Entertainment for inviting Soompi to the press conference and fan meeting.

All non-watermarked images are courtesy of PTO Entertainment.